Flight 93, The Crater And The Open Book 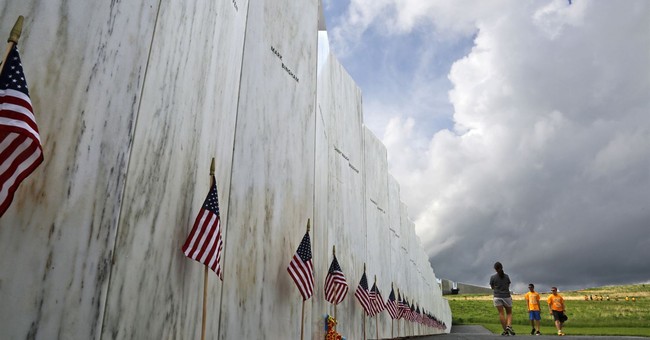 People rhetorically ask where God was on 9/11 as though He wasn't anywhere. Or they ask it accusingly, the way a detective asks a suspect if he has an alibi. "Where were you on the morning of September the 11th?""Can anyone confirm your alibi?"

In fact, an invocation of His name was the first thing I heard when the attack occurred. I was on the air that morning in Pittsburgh. I already knew that one tower had been struck by a jet. One of my regulars was on the line with me when the second plane struck, "Oh, God!" Shock, adrenaline, and perhaps fear. "It's horrible, the jet just disappeared...it's as though the tower just swallowed it up." Yes, it was fear, and a deep sadness.

The next time I heard His name was in Hebrew. The station owner decided to bring the other two hosts into the studio with me for live conversation. Lynne Cullen: smart, Jewish, liberal, dovish on everything except Israel. Naturally, we were talking about the role of Israel in all of this. Lynne took a call from one of her regulars, a Farrakhanite named Cynthia. "You know actually we are the real Israel, the Africans in America, we're the real Jews."

The Nation of Islam people were reliable progressive allies and most days Lynne would have just taken it for the sake of solidarity. But not that day: cheeks flushing, voice rising, eyes flashing "Shema Israel Adonai Elohaynu, Adonai Ehad!" Silence "Can you translate that, Cynthia?!"

There was that name again. Adonai, The Lord.

Thirty thousand feet above my head, though I didn't know it at the time, a man was invoking his name for courage and for comfort. "Our Father who art in Heaven..." said Todd Beamer into his cell phone. "Hallowed by Thy name" the operator that had been chosen to route that particular call on that particular day, intoned along with him. And then the famous "Let's roll". Ora et Labora, pray and work.

Thirty some thousand feet beneath that prayer we were told that there was an unidentified jet over Pittsburgh airspace. We didn't know for sure. Then someone ran down the hall and said to me "Fire. Fire and smoke in Somerset County!" Then we knew for sure. I wondered how many more planes were going to crash that day and thought of Susan and the kids. Quietly in my mind, "Lord protect us, protect my family." There was that name again.

From next to me a deep resonant voice said: "Why us? What does all of this have to do with America?" It was one of the news men. "Christopher Columbus," I said "1492...Ferdinand and Isabella ended the Muslim occupation of Spain and send Christopher Columbus out to find a shipping route which will enable the Christian West to outflank the Muslim domination of shipping lanes." Blank stare. "The Crusades," I said. "'That's how they think of us...we're crusaders."

I wondered about the date. Susan called soon after. "Are you okay?" "No, pretty rough day, how about you and the kids? Indoors, okay?"

I talked to my oldest, Christopher, and asked him to research the date to see if anything in history seemed relevant to this attack. These old grudge holders were big on dates. G.W. Bush laid down an ultimatum to Saddam on 9/11/1990, the "This Shall Not Stand" speech. Maybe there's something there. Then another: Truman lays foundation stone for Pentagon. Neither factoid really clicked. Years later, I would learn that September 11th was an extremely important day in the history of the Crusades: it was the high water mark and the beginning of the great decline of the Muslim empire. In 1683, the Muslims stood at the very gates of Vienna, the furthest they'd ever gotten. September 11th is the day that reinforcements arrived from the Christian King of Poland. The Muslims were defeated and began a long period of contraction and retreat. The Catholic apologist Hilaire Belloc (a close friend of G.K. Chesterton) said:

"Vienna, as we saw, was almost taken and only saved by the Christian army under the command of the King of Poland on a date that ought to be among the most famous in history-September 11, 1683."

I wasn't sure then, and I'm not sure now, which of these dates held significance in the minds of the terrorists. Mark Twain once said "history doesn't repeat itself, but it does rhyme." September 11th 1683 was when the West began its military ascent over the East. The terrorists wanted to tip things in the opposite direction. Perhaps that's why they chose that date. It certainly does sound like it rhymes to me.

But I knew none of this at the time. What I knew was that a plane had crashed in Somerset County. There was a fire ball, smoke, and a crater. The black box was driven 25 feet into the earth, the plane and its inhabitants had disintegrated over an area of almost a hundred acres. In fact, the Lutheran minister who owns that patch of land no longer thinks of it as his campground, but as a cemetery.

Remarkably, not everything disintegrated: there was an open Bible in the middle of the field. Where steel had been shattered, a book remained intact. The first responders were not able to find any piece of metal larger than a pie plate, and yet they found a Bible. Where human flesh had been instantly cremated, paper was only slightly singed. The Bible was seen by the fire chief, two state police officers, and some members of the national guard, in that order. Tom Lavis from the Tribune Democrat told me that story, and confirmed it for me again this week. He spent weeks working to confirm the facts. Tom ran into numerous roadblocks, cops under a gag order, the FBI (which was sharing nothing with the public), and the parents of the Japanese student to whom the Bible belonged, unable to speak English and too grief-stricken to talk to the press. Tom wrote a column, which was faxed to me, because the Tribune-Democrat did not have it available on the web. Tom wasn't a particularly religious guy and wasn't trying to make spiritual hay out of the open Bible. But it was there, and that was extraordinary, and that makes it a story, especially when almost no other object survived.

There were only two objects that could be recognized in the field by the crater: a burning tire and an open Bible. The pages were 'white as snow' according to the fire chief, and opened to 1 Kings 12-16, which tells the story of Israel after the golden age of David and Solomon, when the nation began a long period of oscillation between good and bad kings.

My first reaction to Tom's story was a flinch. A part of my limbic system said "Stay away from this stuff; it's kind of like when some woman finds the image of the Virgin Mary burned into her lampshade." But another part of me lowered its pride and prayed "Lord, I think this is important and that people around the world should know about it. If it is, please help me to do that, because I don't know how to." Eight years later, a newspaper friend contacted me and asked me if I knew of any interesting spiritual elements to the story of the crash of Flight 93 in Shanksville. I told him that, as a matter of fact, I did. This article is the result.

I didn't know anything about that Bible as I drove home from the radio station after that long day. I just know that I felt defeated and exhausted. But as I stepped through my gate I saw our porch filled with makeshift flags, drawn with crayon and marker and pen, taped to pencils with duct tape, and there written in the script of my children were signs that said "God" -- that name again -- "Bless America". I wept then. I weep now.

Gottlieb versus Fauci: Scientists at odds over governors reopening states during the pandemic
Hotair
Joe Biden's Handlers Let Him Out, and Things Are Not Fine
Redstate