If Trade Wars Are Good For Manufacturers, Why Is The Manufacturing Index Falling? 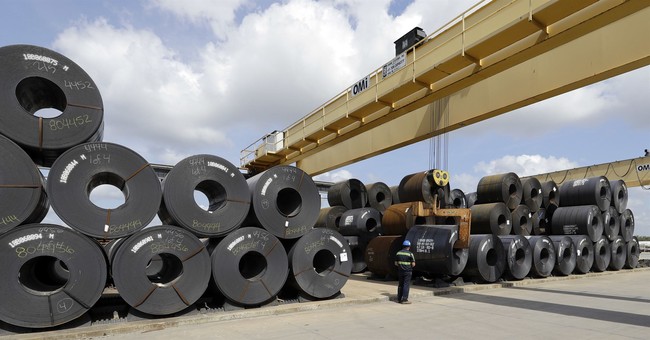 Every month the Institute for Supply Management surveys….well, supply managers. They ask these professionals who are in the trenches (or at the coal face) overseeing details of production of goods and services what they are seeing right then and there in real time. It's not like GDP numbers, even the preliminary versions of which are already one to four months out of date. There are two versions, one aimed at manufacturing firms and the other aimed at services providing firms.

Let's start with the manufacturers. The data below show the overall index which is a combination of many different factors: prices paid for inputs, prices paid for outputs, changes in employment, etc. That's all boiled down to one number and the number is the in the form of an index that theoretically ranges from zero to one hundred (though lamentably we have yet to see a 100 and thankfully have never seen a 0). Fifty is neutral. Above fifty is expansionary. Below fifty is contractionary.

What we see is that the manufacturing sector of the economy responded very well to the election of Donald Trump as president, and that it responded quite well to the passage of the tax cut package and implementation of that tax cut in January of this year. So far, so good. President Trump's rhetoric has been pro-business, particularly pro-manufacturing, and his cabinet members have been waging a fairly quiet battle against regulatory overreach in their various departments.

But since the high point in optimism at the moment the tax cuts were implemented, optimism has been trending downwards. Why? It's probably not due to growth conditions; growth has been solid, and so have profits. Ditto for consumption and consumer confidence. Monetary policy has been getting tighter, but that didn't start this year, it started in 2015. Plus, it was already baked into the cake. The Powell Fed had been clear about intentions to continue tightening. Surely business managers didn't wake up shocked some morning in June to find that the Fed had raised rates.  We all knew it was going to happen. They, as the people who see growth first, probably knew it better than most.

The wild card was the President himself. We honestly didn't know for sure whether he would launch a trade war. He was rather quiet about the topic in 2017 during the push for tax cuts. The inclusion of free-trader Larry Kudlow as his leading economic advisor could easily have been taken as a signal that the president was moving away from trade hawks.

So, when the President took to Twitter and declared that trade wars are good and that they are easily winnable and that the US was built on tariffs, that was genuinely new information. He was a trade warrior, or at least a trade weekend (and late night) Twitter warrior.

Manufacturers changed their outlook, apparently in response to this. They dialed down expectations. This might seem strange to people who get most of their information through the lens of politics. Political speak tends to function in such a way as to rack up points by what a pol says. If a pol talks about the poor a lot, it is taken as likely that he really cares about them a lot. If a pol talks about bringing back our manufacturing base, generally people think that he wants to, can, and will do that.

But I'm not really a political writer: I'm an economic writer and that means I have to look at the actual likely effects of policies, not the intent of them or the words used to sell them to the public. Purchasing managers are in the same boat: they have to get the economics right. And as an economist, I should pay close attention to what they say.  What they're saying is that they are still optimistic, but less so than they were before our quasi-trade war began.

And it makes sense for them to say that. Even though I live in Pittsburgh, which is known for steel and aluminum production, I acknowledge that most of the manufacturing dynamism in America in recent decades has not come from producing raw materials (well, except the fracking revolution, which is producing quite a lot of energy raw material), but rather it has come from turning raw materials into valuable products. If we protect aluminum from foreign competition, we help aluminum producers (at least for a little while), but we hurt aluminum consumers. And I don't just mean the can makers. I mean the aero-space industry and the smart car industry. I mean some of the most exciting and value-added manufacturing processes in the world.