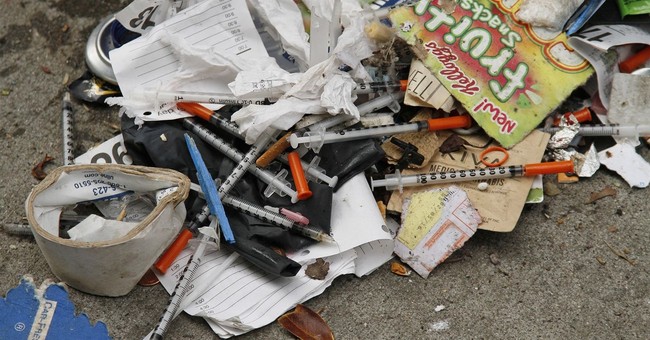 San Francisco is one of the most 'progressive' cities in America. High in taxes, high in regulation, lenient on the sorts of petty crime associated with vagrancy; a sanctuary city, proud of its progressive ideologies. There is probably no better laboratory of what Walter Russell Meade calls the 'Blue Model' -- that is, the model of municipal governance based on the value of the 'blue states'.

One of the effects is widespread dung, needles, and garbage in the streets -- enough that the city lost a large medical conference which would have been worth $40 million dollars' worth of economic activity.

"Many were surprised that a Chicago-based medical association recently said "no thanks" to future conventions in San Francisco, once a cherished favorite conference or meeting site for groups of all sorts, setting off alarms…

And apart from the shock value, this cancellation may be the tip of a very big iceberg. The local NBC News affiliate was brutal in its assessment as to why the cancellation happened: "The amount of trash, feces, and used drug needles scattered throughout the city's streets and sidewalks is making it harder to convince companies to return to San Francisco." Ouch."

This is not an outlier. In fact, the city's complaint website has logged more than 16,000 entries about 'feces'. San Francisco has simultaneously adopted policies which are a magnet for homeless, and which deregulate, in the name of civil libertarianism, exactly the type of behavior by which the homeless, addicts, and other unfortunates make public spaces unpleasant for the middle class, for public workers and, yes, for conference attendees.

The flotsam and jetsam of the homeless underclass are not much of an issue for the city's tech aristocracy. They're off in various corporate campuses and their homes are far from the mean streets/commodes of the dysfunctional neighborhoods. But this is the sort of thing that the middle class, the people who actually do the work, have to be exposed to, and don't like.

Even the famously tolerant millennials seem to be reaching their saturation point when it comes to high prices and public order.

"San Francisco, Kotkin and Cox observe, is a case in point:  "In the San Francisco Bay Area, techies are increasingly looking for jobs outside the region, and some companies are offering cash bonuses for those willing to leave. A recent poll indicated that 46% of millennials want to leave the Bay Area. Meanwhile, these 'best and brightest' have been gravitating to lower cost areas such as Austin, Orlando, Houston, Nashville, and Charlotte.""

San Francisco is, according to our analysis, a city in which the cost of real estate has gotten far out ahead of the economic productivity of the people who live and work on it. And that’s backward-looking. Imagine what happens if the exodus continues… or accelerates!

It is not surprising to see that what IBD calls ‘the best and brightest’ are moving to places in which the cost lags behind the earning capacity, because that’s the smarter bet.