Steel Tariffs Are Not Helping Steel Workers: The Way To Save Steel Is Gold 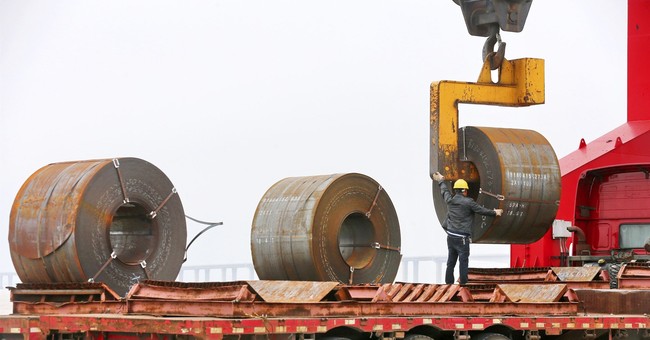 A recent study showed that since the steel tariffs have been implemented the cities which are most dependent on steel jobs have performed worse in employment growth than the national average.

Employment in each of America’s top 10 steel cities has grown slower than the rate of growth for the U.S. as a whole since President Donald Trump announced plans to impose tariffs on steel and aluminum imports earlier this year.

Metro areas in the nation’s Rust Belt, like Youngstown, Ohio, and Huntington, W. Va., saw their employment decline in February and March from the previous year, while others, including Mobile, Ala., notched growth below the overall U.S.’s rate.

Four of the nation’s 10 metro areas with the largest share of jobs in steel manufacturing saw job declines of up to 1.35%, while the other six saw sluggish growth of about 0.7%, well below the nation’s 1.6% growth.

That's because tax hikes are not the way to help workers. These corporation had already restructured starting almost four decades ago, in ways which account for global trade patterns as they exist now. They're not going to go backward and staff up and de-automate. Yes, if we had acted proactively and imposed tariffs in the 1980s as a preventive measure, then protectionist tariffs may have caused steel jobs to stay around a little longer, but that doesn't mean that tariffs can now bring them back.

Less trade pressure 40 years ago would have allowed metals producers to compete using systems much more dependent on human labor. But these companies were forced to adapt, and become more automated. They already deployed the capital, bought the equipment, changed their processes. They're not going to dismantle all that now. Yes, all that change may have come a little too quickly. As a Pittsburgher, I saw some of the human misery of it all.

A true free-market global trade system would have occurred in an environment of stable currencies, and would not have rushed industrial workers off the stage quite so quickly.

It wasn't freedom that put deindustrialization into over-drive -- it was monetary chaos.

The best answer, therefore, is to fix currency relations -- fix in both senses of the word: to repair and to stabilize. When currencies were fixed to gold, then there was no reason for currencies to fluctuate (except if someone cheated), because the world's currencies were just different names given to differently stamped little gold discs.

But when the world decided it was too smart for the universal currency of 4,000 years of recorded history, chaos ensued. The dollar fluctuated between too weak and too strong compared to the rest of the world. When the dollar was too weak, that kept global investors from pouring money into US industries and metals companies became under-capitalized and fell behind strong currency countries like Japan in technology. Forget the bizarre myth that Japan prospered because its industrial base was destroyed by World War II. How could people believe such nonsense? Japan prospered in the 1980s for the same reason that it prospered when it went on the gold standard in 1899, because stable money is a capital magnet. The US industrial base declined not because it was deprived of the allegedly lucky event of having its factories destroyed in World War II, but instead because it suffered the actual unlucky event of having its currency destroyed in the War on Poverty. First the dollar got weak (which is capital-repellent), and then it got too strong (yes, there is such a thing as a too-strong dollar). De-industrialization got hastened and millions were displaced.

The answer is neither strong dollar nor weak dollar, but rather stable dollar, or as the Torah puts it, "Just weights and measures."

Who understands this? Jimmy Kemp at the Kemp Foundation, and Sean Rushton from the same group gets the idea. Financier and historian Lew Lehrman gets it because his mentor Jacques Rueff (advisor to Charles DeGaulle) got it before any of us. Lehrman's associates, my friend Ralph Benko and John Mueller get it. So does Brian Domitrovich of Forbes.com.

Protectionists do not understand this. But neither do 'free-traders' who don't seem to grasp that you do not have free trade when you have chaotically floating fiat currencies, and that the classical economic arguments for free trade and automatic trade balancing were developed in an environment and expectation of currency stability.