How The Financial Panic Of 33 AD Helped Cause The Crucifixion 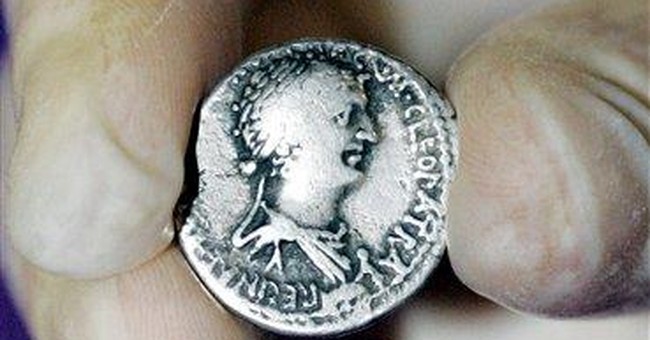 Third in a three-part series; read part one here, and part two here

[The argument I’m about to make depends on using the traditional date for the crucifixion of Jesus, which I do accept. If Jesus was, as conservative scholars have tended to hold historically, in 33 AD, then a financial crisis which began in 32 AD and crested in 33, could (and I will show, likely did) influence it. If however, the crucifixion occurred in 31 AD (the other year in which the date of the Passover is consistent with the Gospel accounts), then the connection would need to be reinterpreted, as the crisis would have come the year after the crucifixion.]

We’ve shown that under normal circumstances, Pontius Pilate would be very unlikely to submit to the demands of the mob and kill Jesus rather than Barabbas. And yet Pilate did capitulate to the crowds. Why?

The answer lies in a sudden and dangerous shift in the political landscape. Pilate was likely appointed by and served under his political ally, the Roman consul, Sejanus. In 31 AD it was discovered that he was plotting an act of treason and as a result was executed. After this Sejanus’ family and then friends were then persecuted, including his allies in the financial community. This triggered an empire-wide financial crisis that seems to have originated in the region of Israel, in Tyre, where Jewish coinage was minted.

"The year 33 A. D. was full of events in the ancient
world. It marked two disturbances as the outgrowth of
the mob spirit. The first was in the remote province of
Judea, where one Christus was tried before Pontius Pilate,
was crucified, dead and buried. The other event was the
great Roman panic which shook the empire from end to
end. The consternation accompanying the latter died
down and it was soon forgotten, but the murmurings of the
former swept down the centuries until, bursting into flames,
it enveloped the world.

A description of the panic reads like one of our own
times : The important firm of Seuthes & Son, of Alexandria,
was facing difficulties because of the loss of three richly
laden spice ships in a Red Sea storm, followed by a fall in
the value of ostrich feathers and ivory. About the same
time the great house of Malchus & Co., of Tyre, with
branches at Antioch and Ephesus, suddenly became bank-
rupt as a result of a strike among their Phoenician work-
men and the embezzlements of a freedman manager…

The Via Sacra was the Wall Street of Rome, and this thoroughfare was teeming with excited merchants. These two firms looked to
other bankers for aid, the same as is done in modern days,
but unfortunately at this time an outbreak had occurred
among the semi-civilized people of North Gaul, where
a great deal of Roman capital had been invested, and a
moratorium had been declared by the government on ac-
count of the disturbed conditions. Other bankers, fearing
the suspended conditions, refused to aid the first two houses
and this augmented the crisis.

Money was tight for another reason: agriculture had
been on a decline for some years and Tiberius had pro-
claimed that one-third of every senator's fortune must be
invested in lands within the province of Italy in order to
recoup their agricultural production…"

Why did Tiberius suddenly impose such onerous local real estate mandates (an interesting combination of two all-too-modern economic errors - real estate subsidies and protectionism) on investors? He did it to punish the political allies of the traitor, Sejanus. Sejanus had risen to the office of Consul, essentially a proxy for Emperor Tiberias in Rome while Tiberias languished in debauchery and semi-retirement on the island of Capri. Tiberias learned that Sejanus was plotting a coup and had Sejanus executed. Tiberius' loyalists began a campaign of retribution against those allied with Sejanus. The financial community was allied with the disgraced and decapitated former Consul and they were subjected to these onerous government mandates. This triggered a financial collapse (in ways similar to the ways in which onerous politically-motivated government mandates triggered our own financial crisis of 2008). The empire was driven into panic.

"The panic was fast spreading throughout all the prov-
ince of Rome and the civilized world. News came of the
failure of the great Corinthian bank, Leucippus' Sons, fol-
lowed within a few days by a strong banking house in Car-
thage. By this time all the surviving banks on the Via
Sacra had suspended payment to the depositors. Two banks
in Lyons next were obliged to suspend; likewise, another in
Byzantium. From all provincial towns creditors ran to
bankers and debtors with cries of keen distress only to be
met with an answer of failure or bankruptcy.

The legal rate of interest in Rome was then 12 per cent
and this rose beyond bounds. The praetor's court was filled
with creditors demanding the auctioning of the debtors'
property and slaves; valuable villas were sold for trifles, and

many men who were reputed to be rich and of large fortune
were reduced to pauperism. This condition existed not
only in Rome, but throughout the empire.

Gracchus, the praetor, who saw the calamity threatening
the very foundation of all the commerce and industry of the
empire, dispatched a message to the emperor, Tiberius, in
his villa at Capri. The merchants waited breathlessly for
four days until the courier returned. The Senate assem-
bled quickly while a vast throng, slaves and millionaires,
elbow to elbow, waited in the forum outside for tidings of
the emperor's action."

If ordinary Romans were panicked, the financial class was terrified. This is the same financial class which was allied to Sejanus. They were part of a power bloc to which Pontius Pilate was allied. Pilate had lost his political patron who was executed on the charge of treason. Sejanus was revealed to be no friend of Caesar, non amicus Caesaris. Pilate's political network was politically ostracized and quite literally bankrupted. That faction was left with no financial capital and therefore no political capital. In a political and economic environment such as that, the threat from the Jewish leaders took on a potency that it had never had before. This time, if local leaders sent a message to Tiberias complaining that Pilate was disloyal, it could come to a Caesar who had just executed Pilate's ally in Rome. Those complaints would be about a Pilate whose friends had just been reduced from oligarchs to supplicants. Further, the threat came at a time of universal financial anxiety. Remember how things felt in 2008-2009? Was the economy going to collapse? How low could it go? Was this the end?

In such an environment, the usually resolute Pilate was much more easily cajoled into participating in the scapegoating of Jesus of Nazareth. People act differently during financial panics. Wars are more likely to start, so are persecutions against minorities.  Historical research indicates a correlation between currency crises and witch burnings, for example. Economic boom and bust cycles have powerful social effects which economists are often blind to. The Augustan building boom, financed through the public treasure, gave way to Tiberian ‘austerity’, and then to a deflationary bust, which increased social anxiety and raised the political risk perception of elites, including Pontius Pilate.

It's easy to understand how the powers of the region would collectively decide to scapegoat a popular grass-roots leader with legitimate claims to the throne. Remember: Jesus was (reasonably) seen as posing a threat to the corrupt special interests at the heart of the Judean economy, such as tax farmers and money changers. Political elites had a good thing going (for them at least) in which they could live off of forcible extraction of taxes and tithes (which, through the addition of force of law had become just another kind of tax) and Jesus had exposed the nature of that system.

In response to the financial crisis which spread from the Middle East and across the world, and which helped trigger the crucifixion of Jesus, Rome embraced a bail-out strategy:

"Tiberius was a wise ruler and solved the problem with his
usual good sense. He suspended temporarily the processes
of debt and distributed 100,000,000 sesterces from the im-
perial treasury to the solvent bankers to be loaned to needy
debtors without interest for three years. Following this
action the panic in Alexandria, Carthage and Corinth
quieted.

And so, under conditions very similar to those existing in
the Twentieth Century, business of the Roman Empire re-
sumed its normal aspect and the Via Sacra went its normal
way, the same as Wall Street has done on many an occasion
after a storm has passed. How similar was the business
of the world in that year of the crucifixion of Christ to
that of the present time !"

According to one commentator, this bailout was done through the establishment of Rome's first central bank. Archeological data show that not long after this currency began a series of debasements.

Neither the scapegoating of Jesus, nor the infusion of vast sums of easy money purchased permanent civil peace. Within a generation, Jerusalem would lay in ruins, and Rome would undergo perhaps the worst crisis in its history other than the one which ended it. Both the destruction of Jerusalem and the near destruction of Rome occurred because political elites failed to heed the teachings of Jesus. Instead they both in their different ways decided to kick the can down the road and ignore the long-term consequences of their policies on the eventual end game… Topics for future treatments in this space.

Governor Gretchen Whitmer: If You’re Tired of Masks And Wish You Could Go Back to Church, Vote for Biden
Redstate
Aurora, Colorado residents figure out that the police aren’t protecting them anymore
Hotair