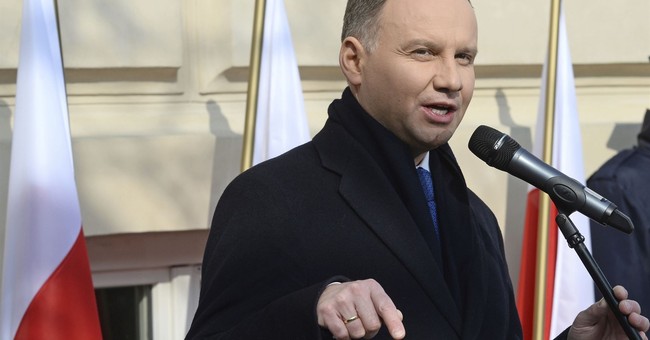 I recently published an article very favorable toward the Polish nation.

I meant what I said. I love the Poland story. They embraced patriotism, Christianity, and a growth-oriented economic model. They were rewarded with the world's best stock market performance.

But as a friend of Poland, I'd like to urge this great nation to reconsider a recent decision.

The following text of my commentary explains what's going on:

"This is Jerry Bowyer of Townhall Finance for Townhall.com.

I'm a huge admirer of Poland. I love the way they have embraced their national identity, including their Christian heritage. As an investor in Poland, I have admired their embrace of human productivity which helped to make Poland the best performing market in the world last year.

But this wonderful nation may be on the verge of a big mistake. It has passed a law which would illegalize speech about the small role which Polish collaborators played in the holocaust. Israeli leaders have reached out and officials from both nations are meeting in Jerusalem to discuss it, while Poland reconsiders this law.

Pope John Paul II, perhaps Poland's greatest gift to the world, probably did more than any Pope in history to heal the relationship between Catholicism and Judaism. His compatriots should follow his great example."

You can listen to the commentary here.

The Poles are tired of being whipping boys for the Holocaust. They are right to be. Roughly the same number of Poles were murdered in the Holocaust as Jews, but perhaps because the Poles are largely Catholic, the scale of their victimization has not really been widely discussed. Other than the occasional low budget film (such as Priest Block), the Nazi attempt at Polish genocide remains unacknowledged.

No wonder Poles are outraged when their horribly oppressed and victimized nation is derided as complicit in the Holocaust which was mobilized against them.

But criminalizing the discussion is not the answer.  Turkey has outlawed discussion of their actual genocide and yet the stain is never really washed away. In fact, the laws which forbid discussing it have the effect of confirming Turkish fear of the truth.

The Polish people have nothing to fear from a full historical discussion of the Nazi occupation. And good relations with their 'elder brothers in the faith' Pope John Paul's powerful description of the Jewish people, is of great moral importance.

I urge Poland to listen closely to their friends, friends in Israel and friends in America. I'm one of them. I'm invested in Poland, because it is a good place to invest. I'm in it with you. In the aftermath of this law, Poland was the world's worst investment performer. It went from best to worst. I think this is because investors are concerned whenever a nation turns towards legal compulsion against free-speech dissent.

This is not a threat of a boycott. I was not among those selling shares in Poland. This is a plea from a friend in the spirit of the Prophet Isaiah, "Come let us reason together."