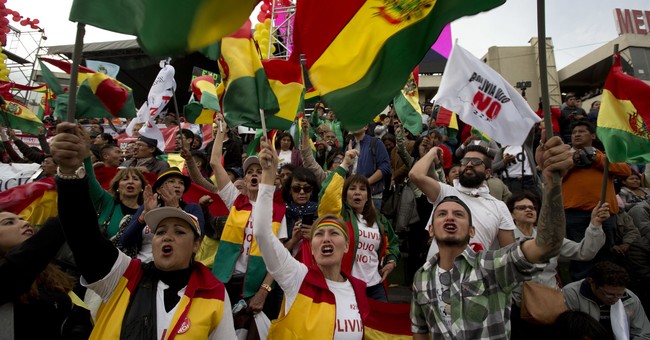 Bolivians have rejected attempts to destroy democracy. Clearly, they did not want to become another Venezuela.

The situation, according to the U.S. State Department, unfolded over the course of several years.

The 2009 constitution limits a president to two consecutive terms of office. In a referendum in 2016, voters defeated a bid by President Evo Morales to remove those term limits. But his government rejected that result and the next year, in 2017, he obtained permission from the constitutional court, essentially controlled by his supporters, to run again for president, in spite of the limits imposed by the constitution. Despite these actions, Bolivians went to the polls on October 20th, hoping for a credible and transparent election, but only to find irregularities on the day of voting, and this included an abrupt suspension of transmission of preliminary election results. And after that, civil society groups quickly organized and increasingly larger protests occurred throughout the country. After three weeks of violent protests, that resulted in death and property destruction, Morales resigned.

The Organization of American States (OAS) released a report that cited egregious irregularities and evidence of manipulation of the vote. They recommended new elections take place with a new electoral court. Morales realized his situation had become untenable. He, his vice president, senior officials, elected officials, and many other ministers followed suit and resigned, claiming that they had been the victims of a coup. That left the nation in chaos, since there was no clear constitutional successor to Morales, who has fled the nation for asylum in Mexico. The Bolivian constitution requires that elections be held within 90 days.

“On his 100th day in office, he nationalized Bolivia’s oil and gas reserves, sending the military to secure the fields, and giving foreign companies six months to comply with the new mandate or leave” but did so on a more practical basis than Venezuela. This allowed the nation to at least temporarily avoid the immediate devastation that would inevitably result. But a significant portion of the economy relies on the illegal drug trade.”

On November 8, The White House Office of National Drug Control Policy released the U.S. Government’s annual estimates of coca cultivation and cocaine production potential for Bolivia. According to these estimates, Bolivia remains the third largest producer of cocaine in the world. Bolivia’s coca cultivation totaled 32,900 hectares in 2018, an increase of 6% over 2017, increasing cocaine production potential by 2% to 254 metric tons. The Yungas region remained the largest coca cultivation area in Bolivia, while the combined Carrasco and Chapare regions represent the second largest. Cultivation is 50 percent over the limit established by the Bolivian government by an estimated 10,900 hectares. That means that President Morales should feel right at home in Mexico, where drug cartels wield considerable power.

In a release, The U.S. State Department stated that the United States,

“… [F]ully support[s] the OAS and Bolivian calls for new elections and a new Electoral Tribunal that can ensure free and fair elections that reflect the will of the Bolivian people. In order to restore credibility to the electoral process, all government officials and officials of any political organizations implicated in the flawed October 20 elections should step aside from the electoral process. We urge the OAS to send a mission to Bolivia to oversee the new electoral process and to ensure that the new Electoral Tribunal is truly independent and reflects a broad swath of Bolivian society. The Bolivian people deserve free and fair elections. We call on everyone to refrain from violence during this tense time and we will continue to work with our international partners to ensure that Bolivia’s democracy endures.”

Share this on Facebook
Tweet
Bombshell Excerpt From Bolton Book Leaks, But The Timing Is Very Suspect
Leah Barkoukis|
WATCH: Buttigieg Tells a Pro-Life Woman She Has No Place In the Democratic Party
Beth Baumann|