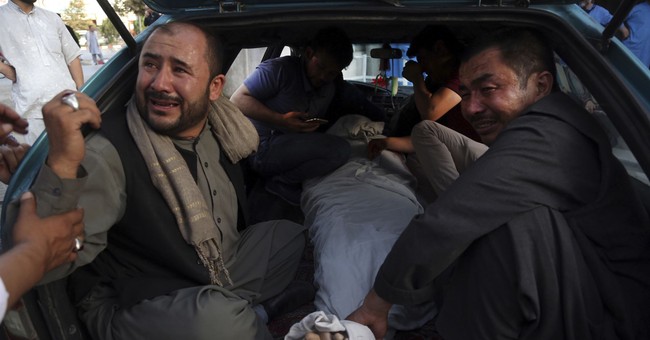 Should Venezuela’s Chavistas and Afghanistan’s Taliban have a role in the new governments that will soon take power? That’s the thinking of the foreign policy establishment, as well as the mantra of the chattering classes.  They may both be wrong.

Put the issue in context. Both the Caracas socialists and the Islamic extremists seeking a role in Kabul have engaged in actions which are reprehensible and defy concepts of human rights.  Neither have presented any evidence indicating that, given a seat at the governance table, they would amend their ways.

Elevating the Taliban to the status of a negotiating partner (a process begun under the Obama Administration) has given it a very substantial boost in its bid to return to power after America withdraws. The Taliban is best known as the organization that sheltered Al Qaeda when it launched the 9/11/01 assault against the American homeland.

Amnesty International describes the Taliban actions: “Mass murder, gang rapes and house-to-house searches by Taliban death squads are just some of the harrowing civilian testimonies emerging from Kunduz as Afghan forces today claimed to have regained control of key areas of the northern city, Amnesty International said. The organization has spoken to numerous people, the majority of them women…Women human rights defenders from Kunduz spoke of a “hit list” being used by the Taliban to track down activists and others, and described how fighters had raped and killed numerous civilians.”

What would the Taliban do as part of a new government? James Clapper, the former U.S. Director of National Intelligence, speaking to the Senate Armed Services Committee in 2015, noted that the Taliban is “… Reliant on Afghanistan’s opiate trade as a key domestic source of funding, the Taliban will be able to exploit increasing opium poppy cultivation and potential heroin production for ready revenue. The Taliban has publicly touted the end of the mission of the International Security and Assistance Force (ISAF) and coalition drawdown as a sign of its inevitable victory, reinforcing its commitment to returning to power.”

Even if the Taliban restricted its activities against either American interests or a new unity government in Kabul, there are substantive concerns about whether its pattern of atrocities, particularly those against women, would change.

The actions of the Maduro government in Venezuela also shock the conscience, and the question of whether officials from that regime should be allowed to have a role in a future Caracas Administration must take into account their participation in human rights violations.

According to the UN High Commissioner for Human Rights:

“The most significant human rights issues included extrajudicial killings by security forces, including government sponsored “colectivos”; torture by security forces; harsh and life-threatening prison conditions; widespread arbitrary detentions; and political prisoners. The government unlawfully interfered with privacy rights, used military courts to try civilians, and ignored judicial orders to release prisoners. The government routinely blocked signals, interfered with the operations, or shut down privately owned television, radio, and other media outlets. The law criminalized criticism of the government, and the government threatened violence and detained journalists critical of the government, used violence to repress peaceful demonstrations, and placed legal restrictions on the ability of NGOs to receive foreign funding. Other issues included interference with freedom of movement; establishment of illegitimate institutions to replace democratically elected representatives; pervasive corruption and impunity among all security forces and in other national and state government offices, including at the highest levels; violence against women, including lethal violence; trafficking in persons; and the worst forms of child labor, which the government made minimal efforts to eliminate.”

Can Washington, in good conscience, be party to the empowerment of powers so inclined?