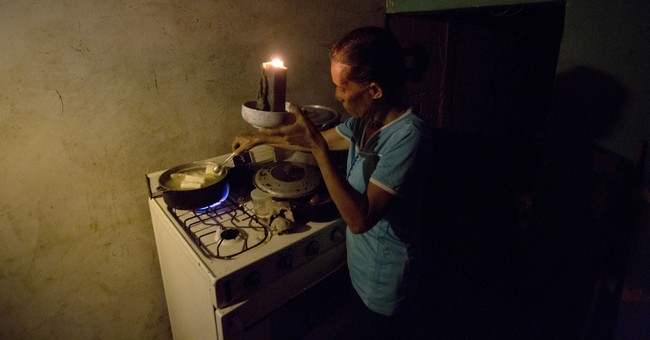 On December 28, ABC‘s evening world news ran a lengthy (by network news standards) description of the horrendous conditions in Venezuela that are causing near-starvation and extraordinary levels of poverty.  The story included heart-wrenching scenes of children dying from lack of nutrition, and once-proud and accomplished adults fleeing their homeland to find the basic necessities of life.

There was one essential, underlying issue the report, like many other similar media examinations, failed to include: why Venezuela, a nation of good, intelligent, and hard-working people, a land blessed with vast natural wealth including a veritable ocean of oil, has been reduced to this condition.

“Venezuela has lost half of its economy since 2013… Food and medical shortages are widespread. People are scavenging for food in dumpsters. Citizens are fleeing by the thousands.”

The reason, plain and straightforward, is that Venezuela has adopted socialism, the very same brand of socialism advocated by some in America’s Democratic Party and others on the left.

Two Venezuelans, Rafael Acevedo and Luis Cirocco, in an article for the Mises Institute  explained:

"Ultimately, the lesson we learned is that socialism never, ever works… It was very common during the years we suffered under Hugo Chávez to hear these pundits and economists on TV saying that this time, socialism is being done right. This time, the Venezuelans figured it out. They were, and are wrong.”

Despite the utter catastrophe wrought by socialism in nations as diverse as the old Soviet Union and today’s North Korea, despite over a century of complete failure in every type of country, devotees of this failed philosophy continue their devotion to it. Even the largest Communist nation of all, China, has adopted a capitalist-type system, meshing it within a totalitarian government.

ABC accurately noted that due to its extreme condition and the ideological leanings of its government, Venezuela has allowed itself to become a base for Russian nuclear bombers aimed at the United States. It failed, however, to go deeper. In an el-Nacional newspaper article first reported by Fox News, Vladimir Medrano Regifo, former director general of the Office of Identification, Migration and Immigration of Venezuela, revealed that the Venezuelan government may have distributed about 10,000 passports to Syrians, Iranians, and nationals of other Middle Eastern nations.

Despite the disaster wrought upon the people of Venezuela, and the resulting danger to the entire Western Hemisphere, neither ABC nor most other major media outlets have identified Socialism, the same economic concept espoused by Bernie Sanders and far too many others, as the root cause.

“Americans’ heavy flirtation with socialism continues, and nowhere is that more evident than in America’s youth. For many millennials, socialism appears to be both a viable and desirable replacement for capitalism. It isn’t, on any level. America’s older generations have no one to blame but themselves. They delivered their children and grandchildren into the hands of unionized public schools run by leftist administrators, with their dumbed-down, biased curricula.”

It is appropriate to blame America’s progressive-controlled educational establishment for the blindness towards the failings of socialism. Since at the least the 1970’s, the nation’s education establishment has tilted sharply towards the left, especially in economic policy. One-sided, “progressive” professors have indoctrinated, rather than instructed, college students. Imperfections in capitalism have been highlighted and exaggerated, while the glaring and dramatic failings of socialism have been obscured.