Comedians May Save Us From The Left 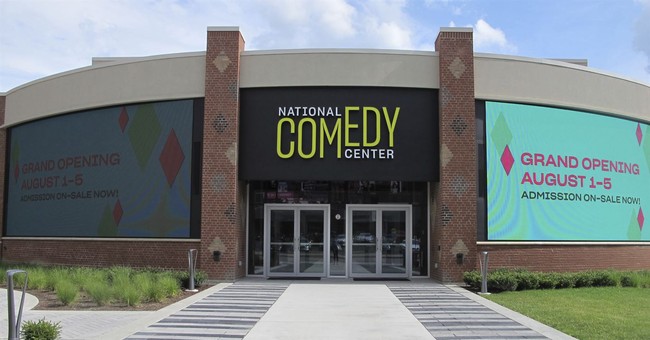 The left is in the process of expanding their control. Having taken over virtually every American campus and much of American life, their sights are set on controlling the whole world (totalitarian globalism). Perhaps comedians can save us.

Comedy requires values and a willingness to explore potentially uncomfortable challenges to those values. Academia has become humorless because of political correctness. Many comedians are avoiding campuses or are altering their material to avoid trouble from the left. Everyone on campus is rightly leery of being accused of demeaning a person who is poor, non-white, female, liberal, Muslim, etc.

If the left succeeds in destroying economic freedom in America, the effect on our economy will be quick and devastating. Young progressivists believe that less economic productivity would be a good thing for the environment and for the human condition. They cannot even imagine how wrong they are. If the left wins, the biggest loss to the welfare of humanity will be the loss of innovations yet to come. There are potential technological advances that no one can imagine today. We cannot know the total opportunity costs of things we cannot predict.

Fifty years ago my grandfather died of heart disease that could have been easily prevented or remedied had he lived today. One of his great-great grandsons was recently born with heart problems that surely would have been fatal if not for several amazing advances in health care. Even as that great-great grandson lost weight and headed for death, surgeons were able to repair the problems and give him a future. As the infant’s grandfather, I am grateful – not just for the advances in medical care – but for the economic prosperity of the last 50 years that has provided the means for the advances.

The left’s goals of economic equality and centralized oversight of the economy will surely reverse the economic course of the entire world into poverty the same way that it is doing in Venezuela (and has done in every other case).

Innovation rests primarily on trial, error and the survival of the fittest ideas through competitive markets. Economic equality and centralized economic control destroy the process. I spent time in Poland when it was under Soviet control. The only technological progress there came from observing the innovations of the world’s free economies. Fear permeated the culture. Eventually the Soviet Union collapsed – a testament to the failure of the economic policies espoused by the left today. If it were not for its ability to observe and emulate the free economies of the world, the Soviet Union would have declined even faster than it did.

I cannot imagine the innovations of the future that my great-great grandchildren will be able to enjoy if the U.S. remains a place of substantial economic freedom. But the left is committed to destroying traditional American freedoms. It’s almost as if the left cares more about their personal political power than the welfare of the masses.

I have noticed lately that comedians (e.g., those on SNL) are beginning to push back against political correctness (likely due to poor ratings). Perhaps they can lead a revolt against both economic and non-economic authoritarianism. Perhaps comedians can teach our youth that freedom of speech builds a healthy society. Perhaps we will return to the principles of both civil and economic freedoms that made this nation so great.