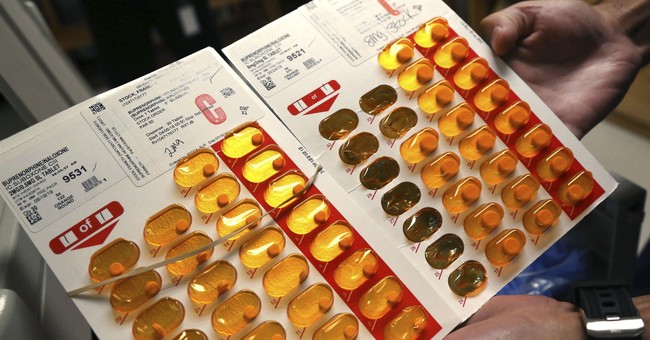 Prescription drug prices have fallen so much in the last few decades that some stores now offer them for small fees or even free. For example, Walmart offers major diabetes, cholesterol, blood pressure, heart-related, family planning, mental health, and other medications for either $4 or $9 per month – with no insurance plan required.

Most prescription drug prices follow a simple pattern: they are expensive for a few years after the drugs have finally passed the long, expensive, and difficult process of receiving FDA approval, and then the drugs eventually become inexpensive as government finally allows generics to become available.

But some drug prices are outrageous. Some new drugs have pre-insurance prices of thousands of dollars per month. Worse, some old drugs have soared in price. For example, years ago epinephrine auto-injectors served as affordable emergency devices to treat people experiencing serious allergic reactions. But in recent years these auto-injectors have soared to about $300 for a two-pack. Who is getting all this money?

Well, it would seem to be easy to answer: drug companies. But companies cannot really get rich - only people can. In other words, organizations themselves are simply legal constructs and therefore they cannot enjoy or consume wealth – people do. Governments, churches, and for-profit corporations do not eat, drink, go on vacations, use electronic gadgets, or receive medical care. It is people that use resources (i.e., consume). It is people that sip champagne, take drugs, and receive medical care.

Businesses might use resources such as electricity and plastic as inputs for producing finished products. However, ultimately it is only people who benefit from economic production and consumption. People sometimes chose to bestow economic benefits such as food on animals such as dogs and cats – but that is still ultimately done for the benefit of people (although cats refuse to acknowledge that). The point is that wealth is ultimately only owned by and used by people.

The evidence on shareholder returns to pharmaceutical companies is that they have been lower than the overall market on a risk-adjusted basis over the last decade or two. For example, since its inception in 2006, the exchange-traded fund XPH (covering the 39 largest pharmaceutical companies in the U.S.) has generated an average annual return of between 9% and 10%. That seems like a high return. However, most major U.S. market indices have also averaged between 9% and 10% per year since 2006 – and even more dating back through the last century.

Although U.S. pharmaceutical returns have been roughly comparable to the overall stock market in the last decade and a half, pharmaceutical risks tend to be substantially higher than average. Since pharmaceutical stocks have greater-than-average risk, the risk-adjusted performance of pharmaceuticals has actually been relatively unattractive.

So if pharmaceutical shareholders are not reaping the financial benefits of high drug prices, who is? Well, let’s consider people outside of pharmaceutical firms such as government workers, lawyers and plaintiffs.

Wechsler[1] reported a budget plan in 2018 of “$5.8 billion in total resources for [the] FDA, with $3.25 billion coming from federal appropriations and the rest from industry user fees.” CureFFI.org cites data from “Hutt, Merrill, and Grossman, 2014, Food and Drug Law 4th Ed.” in indicating that the FDA’s budget has steadily increased one-thousand-fold over the last 100 years.[2] These direct FDA costs do not include the massive expenses of regulations borne by the pharmaceutical companies attempting to receive approval for new drugs.

So there are many groups of people who are financially benefiting from over-priced drugs. Are pharmaceutical shareholders to blame? Generally, I think not. And based on the evidence, I would not suggest over-investing in pharmaceutical companies. You may find out that the revenues generated from pharmaceutical sales won’t generate higher-risk-adjusted returns for your portfolio once regulators and litigators have taken their tolls.