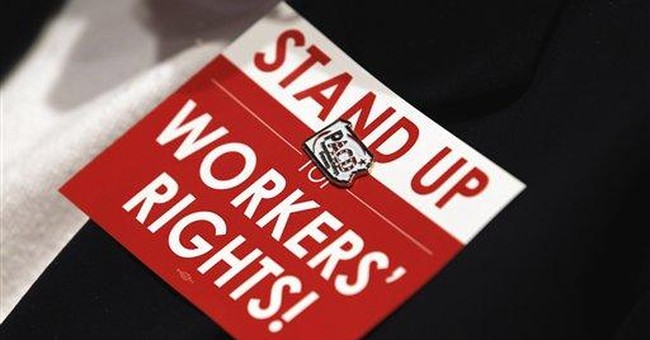 Leftists pretend to be dedicated to helping the working class. But in practice they are far more interested in helping themselves.

Take for example the way that leftists attack employee-owned businesses. The vast majority of American businesses are employee-owned: farms, retail shops, small manufacturers, law firms, accounting firms, consulting firms, skilled-tradesmen proprietorships, and even some large businesses. But leftists sandbag these small firms with disproportionate regulatory expenses. These myriad regulations are especially burdensome to small firms because small businesses lack economies of scale when it comes to implementing and documenting their compliance. The Cost of Federal Regulation to the U.S. Economy, Manufacturing and Small Business by W. Mark Crain and Nicole V. Crain[1] reports disheartening data on the regulatory burden faced by small, employee-owned firms:

The main reason that leftists don’t like employee-owned firms is that when a firm is employee-owned it is much harder for the leftists to whip up public support for intervention by vilifying the owners as lazy, overpaid capitalists. Leftists claim that firms are not doing enough to provide employees with desirable wages and benefits. But how many leftists start businesses to offer employees these so-called living wages and generous benefits? No, they simply try to force capitalists to pay employees wages that exceed market levels.

Leftist attack all firms whether they are owned by its employees or by “outside” investors. The goal of socialism and communism is not ownership by the "workers." The goal is control of all production and consumption by the intelligentsia and political elites. And they are well on their way to getting it here in America.

Another example of the left’s lack of concern over the welfare of workers is their reaction to data on improved US employment – especially for minority groups. Leftists jeer at the tremendously improved US employment figures of the past few years. They lampoon the data with claims that the workers are merely making the rich become richer. Any good news for workers is bad news for the leftists who seek their allegiance and obedience.

Most leftists ultimately care mostly about themselves. The same is true about capitalists. But the differences are:

1. The left wraps themselves in the cloak of extreme concern for others.

2. The left’s goal is to control worker – thereby denying workers their natural rights. Leftists seek power over all – not economic equity.

I spent time in Poland in the 1970s when that country was under Soviet control. I saw firsthand the gap between the lives of power and privilege for the ruling class and the lives of helplessness and drudgery for the workers. Since Polish elections were fixed, the workers had no power. The left didn’t even pretend to care about the workers.

The last 25 years of my teaching career was at a college with a left-leaning and powerful faculty. Despite all their blather about income inequality in America, year after year they sought higher and higher pay for faculty while the gap widened between them and other college workers (e.g., maintenance crews and clerical workers).

The politics in higher education are a taste of what is in store for America if the leftists take full control. I do not recall any conservative at the college who tried to prevent leftists from teaching electives in their various passions (feminism, multiculturalism, socialism, etc.). But, as a finance professor I had a ring-side seat to the leftists who fought tooth and nail to prevent business courses from being offered. Any faculty member who dared proposing a course that countered the propaganda of the leftist courses was attacked – as I was when I taught a course on the writings of Ayn Rand. The left’s hatred for freedom – especially economic freedom - runs deep.

The initial goal of socialism and communism is total government control of the business sector, commerce and other economic activity. But their control will not stop there. It never does. The left wants full control of every aspect of our lives.