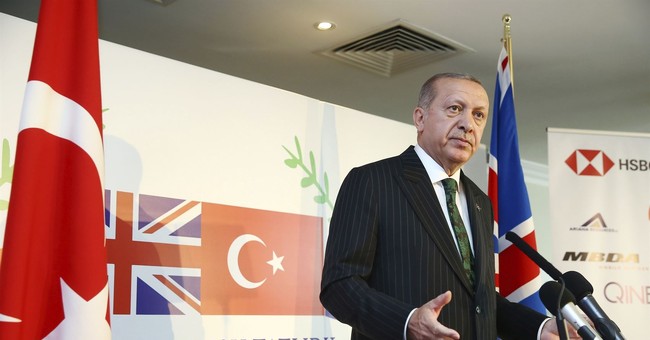 The Turkish central bank managed to halt the free-fall of the country’s currency last week with a sharp rise in interest rates. But the move failed to stop the free-fall of Turkey’s equity market and – far more dangerous – the collapse of the credit quality of Turkey’s banks. Only last October, the euro-denominated 10-year bond of Turkey’s largest private lender, Garanti Bank, yielded just 3%. Now it yields more than 7%, and the dollar value of the bond has fallen from over 120 euros to around 80 euros.

Turkey’s Istanbul 30 stock market index meanwhile has fallen by 35% in US dollar terms since August 29, 2017. Its most vulnerable lender, Halk Bank, lost 63% of its US dollar value in the same period and now trades at 40% of book value.

Turkey’s banks are shut out of world capital markets, and the country is hard put to raise the US$50 billion in new hard currency it needs to finance a current account deficit running at around 6% of GDP. Turkish businesses have about US$300 billion in foreign currency debt, and the cost of servicing it has nearly doubled in local-currency terms due to the lira’s depreciation since 2015. The banks will have trouble rolling over their existing short-term borrowings in hard currency, and trouble collecting loan payments from customers crushed by the collapse of the lira.

Like the dead parrot in the Monty Python sketch, Turkey’s major banks have flipped the mortal coil and joined the choir celestial, but the Turkish central bank is there to maintain the illusion of life. The trouble is that the central bank’s resources are running thin: Foreign exchange reserves as of June 1 stood at just US$82 billion, or four months’ worth of imports, vs. nearly US$120 billion at the end of 2014.

As of May, producer prices in Turkey rose 20% year-on-year, which will force sharp cuts in manufacturing and agriculture output. The combination of aggressive inflation and a credit squeeze portend a sharp contraction of Turkish economic activity.

As the stock market prefigures, the weak point is the banking system.

During the past two years, the short-term debt of Halk Bank and Garanti Bank, combined, has risen four-fold, from about 20 billion lira to 80 billion lira.

What happens next probably is what happened to Greece during its financial collapse. Its largest financial institution, Alpha Bank, borrowed massively in the short-term market. When the crisis hit, Alpha couldn’t roll over its debt and had to repay its short-term loans. Its stock now trades at around 35% of book value, about the same as Halk Bank.

When Greek credit collapsed, the economy shrank by 25%. In Turkey’s case, a 10%-20% overall economic contraction is quite possible. The political consequences of an economic disaster of that magnitude are hard to fathom. Turkey’s President Erdogan arrested more than 47,000 people after the abortive July 2016 coup attempt, and inflicted a wave of violence on the Kurdish-majority southeast. There are a lot of political scores to settle in Turkey, and an economic crisis would make Erdogan most vulnerable.