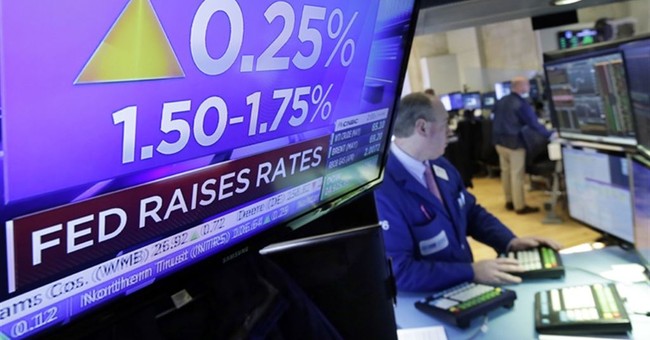 The latest in the market

So after last Friday's 600 point drop in the Dow in a day that will be remembered as much for some tweets as it will the escalation of the trade war, this week saw the market go back the other way (reminder: Volatility cuts both ways).  Monday we jumped almost 300 points on the idea that China had "reached out by phone to want to make a deal."  Tuesday we went backwards 100 points when it turned out no one knew who made that phone call.  But then Wednesday jumped 250 points and at press time Thursday we were up another 250+ points (all on trade optimism).  At press time, a net positive week of about 650 points.

And here is the extraordinary thing about the month - depending on what happens Friday in the market, we are only down about 500 points in the Dow all month (~2%), despite 300+ point DAILY volatility in the market throughout the month.

The latest in the trade war

So last Friday, making sure I first had already submitted last week's Dividend Cafe so I couldn't update my weekly screed, China announced that they would impose new 5-10% tariffs on $75 billion of American goods, and reinstate 25% tariffs on auto products.  After the market closed Friday, President Trump announced that the 25% tariffs currently imposed on $250 billion of Chinese imports would be raised to 30%.  He further announced that the 10% tariffs starting in September will now be escalated to 15%.  It is important for readers to understand that this is the very tit-for-tat nature of trade wars - each side retaliating in a sort of murder-suicide pact that leaves both sides worse off, and with action forcing an equally (and mutually) destructive reaction.  And so forth, and so on.

At the G7 meeting of world leaders this weekend (the G7 does not include China), President Trump announced that he could declare a national emergency, which would allow him to declare severe restrictions on U.S.-Chine trade if he so desired, and he stated that he regrets not raising the tariffs even higher on China.

The futures were down 300 points Sunday night, but up 200 points Monday morning (a 500 point swing), as President Trump stated that China had contacted U.S. trade representatives to say they wanted to return to the negotiating table.  Thursday morning China announced the breathtaking, bombshell news that they "still hope for calm trade negotiations."  [Yes, I am being sarcastic, but this is the world in which we live right now].

A deeper dive on the trade war

The analyst I am most closely following as this trade matter continues to unfold has convinced me a "structural" deal is no longer possible on this side of the 2020 election (i.e. something substantively comprehensive).  However, the possibility lingers of yet another delay in already-declared tariffs, so as to yet again posture towards "continued negotiations."  The delay would not necessarily serve the purpose of both sides being able to work their issues out, but rather allow for more positioning (for one side, or for the other, or for both).

A likely cause in this week's market rally that has been mostly un-discussed is China's lack of surprise escalation in their currency endeavors.  Where they are fixing the Yuan each day relative to dollar does represent a reactive move to the tariff impact, but certainly two weeks ago markets had to fear that it would be worse, more dramatic, more unsettling.  So far the measured pace of allowing the Yuan to fix at lower exchange to dollar has been absorbed by markets in stride.

The latest in the rate war

The Fed did not telegraph their exact plans in the annual economic summit of Jackson Hole, WY last week.  Nevertheless the futures market continue to reflect a 100% chance of one rate hike at the September 18 meeting (and a 0% chance of two rate hikes, and 0% chance of no action).  The December action, though, now reflects a 16% chance of no additional cuts beyond September, with a 48% chance of another cut in December, and a 35% chance of two more cuts (beyond the September one).  If there has been any new news on the rate front it is that the Fed has been revealed in recent minutes and recent press statements to be more divided than previously thought, with several "do nothing" advocates on board, and several "do more" advocates.

The latest in the yield curve

The curve inverted again on Friday of last week for a few minutes, and this week it bounced in and out of inversion several times (sometimes by just half a basis point).  Even when not inverted, the curve has obviously remained almost entirely flat (the yield difference between the 2-year and 10-year treasury  bond has been practically the exact same).

One of the greatest evidences of the silliness of the present talk is, well, the present talk.  The great economic stories and market impacting events are never, ever the ones that dominate headlines (until after they have played out; never before).  The past events of yield curve inversions and subsequent recessions have come with such a varying degree of lag that the predictive value is functionally useless for an investor.  The historical "false positives" further pollute this conversation.  Furthermore, several recessions followed curve inversions for reasons that had nothing to do with what was going on a year or so earlier when the curve had inverted.  Do you see my point?  There is just way too small a sample of historical data and too much hair on the data we do have to allow for any kind of investment policy around "yield curve inversion."

Another issue brought to my attention this week: The alleged correlation between yield curve inversion and recessions is a distinctly American phenomena.  No such correlation is alleged to exist in the UK, where there were three different multi-year inversions over a 15-year period of non-recession!  Why would that be?  Anatole Kaletsky of Gavekal Research said it best:

"Should we therefore believe that US bond investors have unique oracular powers with which their counterparts in other countries are not blessed? Or is it more likely that yield curves get inverted for reasons completely unconnected with the economic outlook?"

I really don't even know what to say about this.  Rates have dropped.  Spreads have tightened.  And it would be tough to argue that corporate bonds are the most compelling part of the taxable fixed income universe.  But if anyone could have guessed that high quality corporate debt would be up 13% in eight months at the beginning of the year, I have a flying cow to introduce you to.

Closing with the economic matters I most care about

The conversation around the market, the trade war, the next move of the Fed, and all the surrounding subjects to those matters, impact short-term market expectations, and to some degree tactical weightings in the present portfolio moment.  But what is playing out right now in history is far more significant than the month by month gyrations from President Trump's twitter and the Fed's next rate move.  As the Chief Investment Officer of The Bahnsen Group I am responsible not just for security selection in our client portfolios, but macro asset allocation decisions as well.  And the macro positioning in the years and indeed decades to come is going to be largely driven by the absolutely profound dynamics we face in global debt.  More specifically, macro asset allocation decisions must be informed by the impact debt has on (a) Growth, and (b) Yields.

Inflationary expectations drive nominal bond yields in periods of normalcy, along with the realities of the business cycle.  So interest rates moved up and down, but largely did so around cyclical realities in the economy (business cycle) and inflation.  But over-indebtedness (nationally and globally) has changed the landscape, such that debt as a percentage of economic activity has forced bond yields dramatically lower.  This has created a negative feedback loop of a depressed return on capital, which means less capital investment, which means less productivity, which means less growth, which means [you guessed it] lower bond yields still.

Japan and Europe are not perfect analogies to the United States, but they sure are clear precedents for the economic phenomena I am describing here.

I believe we face a period of time where, assuming excessive indebtedness is not addressed (anyone want to dispute that assumption?), the vicious cycle will continue, keeping bond yields low, yet not as a stimulant to economic growth, just asset prices.  Do you see what I have done there (and it is on purpose ...) ?  I have made a quasi-bullish case and a quasi-bearish case all at once.  On one hand, I have no doubt that the intent of all policymakers in the paradigm I have described is to stimulate asset prices.  "Don't fight the Fed" has hardly been a losing proposition for investors - pretty much ever.

And yet, the monetary imagination of central bankers is experimental, unprecedented, and maybe even dangerous.  The velocity of money is low - lower still in recent times - meaning that central bank interventions are even less effective.  Can the long term compression of growth be long term compatible with a long term stimulus to asset prices?

The question is rhetorical.  One must set their equity, bond, and alternative allocations for the decades ahead around these realities.  Durables, dividends, non-cyclicals - the things people must have: These are the components of equity risk that make sense, now, and for many years to come.

“The sacred rights of mankind are not to be rummaged for among old parchments or musty records. They are written, as with a sunbeam, in the whole volume of human nature.”