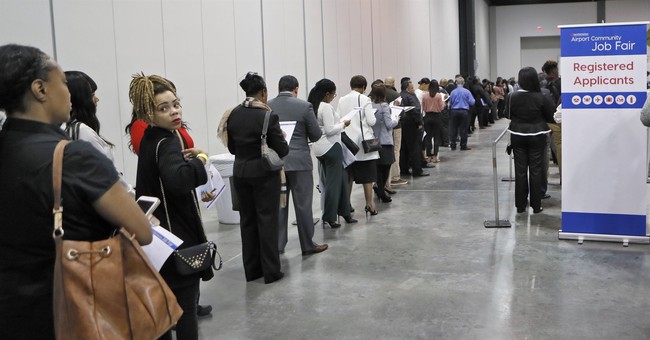 This has been a strange week for a nice, positive move in market indices, yet that is what has happened (at least as of press time).  Airplane safety fears, college admission scandals, and never-ending announcements of Democrat candidates for the next Presidential race all dominated the news, yet markets advanced on the basic foundation that the economy is fine, a trade deal ought to be coming, and, did I mention the Fed is on the sidelines?

I bring us back this week to some important themes for understanding the next phase of markets and the economic cycle.  We will look at the state of capex, last week's jobs report, the realities of present economic growth, Brexit, credit, and so much more.  It's one of those weeks where I am particularly happy with this week's commentary, so let's jump into the Dividend Cafe ...

If readers are barraged with any theme from us over the last 1-2 years it is that an expansion of this economic recovery and bull stock market largely depends on a resurgence of capital expenditures in corporate America.  The thesis is that increased business investment will drive higher productivity which will, in turn, create extended growth across the economy.  When capex slows, you see industrial, energy, and materials companies suffer.  During the oil sell-off of 2015, we saw capex collapse across the industrial economy, and the worst performing sectors were indeed those three.

We presently are seeing the highest level of capex spending in S&P 500 companies that we have seen in 25 years!  Non-residential fixed investment grew 7% in 2018, more than double the rate we have seen for the last 20 years.  Blackstone's recent CEO survey saw over half of respondents indicate plans to increase capex spending further from here (1).  The need of the economy is greater efficiency and capacity utilization.  With high levels of business confidence, the impetus is there for greater business investment which drives the economy towards higher levels of efficiency.  This drives productivity higher without driving wage and labor costs higher.  The thesis has plenty of risks to it - the trade war of 2018 being greatest proof of that.  But we still believe this forecast is needed, and we believe the odds are better that it does play out than doesn't.

Our thesis has been that capital expenditures from companies have severely lagged what we have seen in past economic expansion cycles.  If capex were able to "catch up" to the levels seen in other periods, it would have the effect of extending and improving this particular economic expansion.  Note the muted levels of capex growth in this entire economic recovery, and it may shed light on why we believe a capex renaissance would be so impactful to the economy.  I dedicated an entire Market Epicurean [Click Here]  to this subject earlier this week.

So January's report blows expectations out of the water with 300,000+ new jobs, and then February's comes back with only 20,000 jobs created.  What gives?  At the heart of the challenge is their attempt to "seasonally-adjust" the numbers to a model, a model that has long proven difficult in creating accurate, smooth monthly numbers.  The revisions that come in future months are rather significant this time of year.  I have advocated for quite some time evaluating the jobs data in "three-month rolling averages" to account for lumpiness in the numbers.  And by all such metrics, the jobs data has been hugely positive, and both the wage growth and increasing labor participation force speak to increased productivity into the future.

It's early in the game, but let's look at the scoreboard

So much of what is playing out right now in the economy comes down to what the impact of the tax reform bill signed into law at the end of 2017 proves to be.  Growth projections have relevance to what deficit projections ought to be, and deficits have relevance for what interest rate projections to be, etc.  The inner-connectedness is extreme.  For the fiscal year 2019, the White House is assuming about 3% real GDP growth.  On the other hand, many left-leaning economic think tanks are projecting 2% growth, some even lower.  Our own forecasts are that if you took the low-end forecasts and the high-end forecasts and drew a line in the middle, the final number will end up being higher than the middle line (for 2019).  Put differently, the rosier forecasts may not be exactly right, but they are more right than the non-rosy forecasts.  As for the 2018 results, it is important to remember that the same detractors last year forecasted numbers 2.5% or lower (in some cases 2% or lower), while the White House forecasted 3.1%, and got, well, 3.1%.

And let's look at the box score

If one wants to look at the total scoreboard to evaluate the lay of the land, it behooves us to also look at the details found in the box score.  How does one end up with a +3.1% real GDP growth for 2018?  $730 billion of repatriated assets is a good place to start!  With $1.7 trillion of U.S. corporate cash held overseas pre-tax reform, seeing $730 billion of it come back in one year was surely every bit the stimulant many thought it would be, and frankly, the supply-side benefits of such will play out for years to come.  38% of the repatriation went to stock buybacks and dividends, both uses of a case we find to be perfectly legitimate and stimulative in capital formation.  But an additional $500 billion going into non-capital return uses (reducing debt, M&A, capex, etc.).  The fourth largest increase in capex ever suggests that repatriation was a driving force in economic growth last year.

Will the Q1 GDP number we get in a month or so reflect 2019 off to a good start?  Probably not.  Now, the government shutdown that lasted throughout January may have something to do with that, but the truth is that Q1 has lagged the other quarters of the calendar year for a decade now, likely because of the way seasonal adjustments are now calculated.

What about earnings recessions?

I wrote last week why I did not believe we would end up seeing negative earnings growth this year, but may very well see modest negativity in one quarter's earnings growth.  I think it is worth noting what happened last time earnings growth went negative.  We did, indeed, go through a flat period in the markets - not negative, but just barely positive - and by March of 2016, six months in advance of earnings growth acceleration, we began a two-year rally that saw 30% growth in stock prices.  In fact, in the 30 years since 1927 that earnings declined for the year, the market was up 23 of those 30 years.

It was likely no surprise to anyone that parliament again failed to pass Prime Minister May's latest Brexit proposal, one she surprisingly received approval from the European Union for, just not her own parliament.  A delay in the March 29 deadline looks most likely at this point, which is why markets did not respond as if a sudden and disorderly Brexit was imminent.  The options going forward appear to be:

(a) A very soft Brexit, whereas Britain's relationship to the EU will look much like Norway's

(b) A new referendum vote altogether (if you don't like the outcome, just have another election)

(c) A hard-line Brexit after all, which seems unlikely but not impossible at this time

For now, we watch the particulars of a likely extension and what position it leaves each side in to obtain leverage for the end objectives.  Global markets continue to price in what we have long believed: That it is within the power of those driving this process to make it less disruptive than otherwise and that Britain's real economic standing is not remotely threatened by sovereign independence.

Why the Fed waved the white towel

Tightening credit is the precursor to a recession, and the reason the Fed reversed course so substantially in the last two months on their tight monetary policy plans can be seen in the charts here.

The move higher in late 2018 as it pertains to tightening access to credit for commercial and industrial loans, and the increase in those borrowers seeing a higher cost of funds, both indicated to the Fed a credit market that had had enough of the tighter monetary direction the Fed was on.

Fretting the Fed for the right reason

I have written a lot as to why the Fed's challenges now in "normalizing" monetary policy really come back to the strategies that were chosen to treat the financial crisis from 2009 to 2013.  There exists continued uncertainty around how weening off that stimulus will impact the very credit markets they initially provided so much assist to.

But what I have not criticized QE for is being inherently inflationary.   QE is NOT inflationary in and of itself because its “money printing” was not “money circulated.”  The “velocity” of money has been so low (money turned over) that higher excess reserves have not resulted in inflation.  I agree that QE took that risk, but Bernanke was proven right that it would end up bringing long rates down without increasing the money supply.

I talk about this subject all the time, usually to reiterate how irrelevant this subject is in the grand scheme of things, as (a) Behavioral commitments that fail undermine investor success whether the strategy is active or passive, and (b) No one is really ever passive, because some active decisions have to be made around the underlying asset allocation, style, capitalization, etc.  However, I will add to the conversation yet again that I really believe we are entering what will be a prolonged post-QE and post-ZIRP era where those who believe there is no need for discernment in portfolio management will see how untrue that is when there is not a central bank assist to every risk asset under the sun.  Investing is not and never has been hard science, and the results are not and never have been predictable, let alone repeatable.  Human intelligence, experience, discernment, and interpretation matter, and the willingness to stray from consensus thinking will be an asset in the decade ahead.

Yield curve refresher: Cause, effect, and both

The three-month Treasury yield sits at 2.45%, and the 30-year treasury sits at 3%.  So a whopping 55 basis points separate the annual reward for loaning the government your money for 90 days, vs. 30 years (10,950 days).  At 2.62%, the 10-year has dropped 10 basis points in the first half of March, widening its gap from the 10 to 30 year, but tightening its gap from short-dated maturities.  The fact of the matter is that from 1-month to 10-years, we have a practically completely flat yield curve.  The cause is very simple: The Fed raised rates enough that the short end of the curve came up; and confidence in longer-term sustained growth is not high enough for longer-term yields to go higher.  Remember the capex discussion of about ten sections ago???  Well, that will be the issue that determines how the yield curve plays out.  And if I am being fair, confidence in global growth is so low, that with global yields anchored down, it makes it very hard to U.S. yields to move much higher as well.

Volatility is enhanced when investors are less likely to keep companies they own for the long haul.  But opportunities are also created when good long-term wealth creation is sold off by weak hands to better investors.

Our Chart of the Week demonstrates the secular trend towards less meaningful stock ownership and more hot potato trading.  I see this as an unfortunate trend for most investors, and a great opportunity for those who will monetize their financial objectives with great companies returning cash to shareholders year-over-year-over-year.

"Many an optimist has become rich simply by buying out a pessimist."