The Emerging Case For Emerging Markets 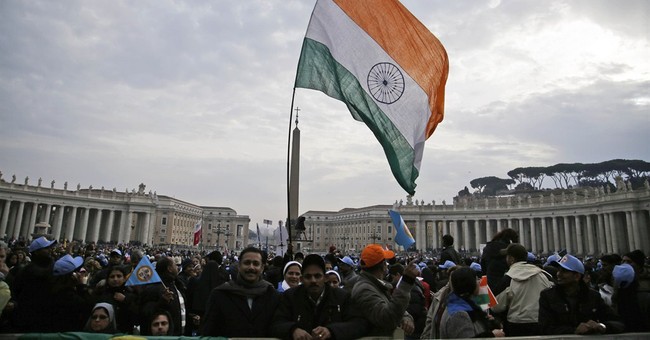 Markets have cooled off this week (finally), not with any meaningful sell-off, but with a slow drip of barely negative days each day.  We are in that stretch of time where one quarter's earnings season is behind us, the next quarter is not complete, the Fed has moved to the sidelines, and there is not a large amount of news-making action out there to drive markets.  We need to look at fears around earnings growth today and totally unpack that hot topic.  We look at the markets year-to-date, what is hot, what is not, and generally check in on all things market, valuation, and more.  It is an action-packed chart-filled week, so please jump in, to the Dividend Cafe ...

What to make of earnings growth?

With Q4's earnings season now wrapped, having been reported throughout the middle of Q1, we now see a year-over-year quarter in which S&P earnings were up ~14%, Revenue growth for the quarter was +7% year-over-year, below the 9.7% of the rest of 2018, but still robust nonetheless.  What is getting a lot of attention is not the results of the earnings season we just had, but the results of the earnings season we will soon have.  Companies projected Q1 earnings downward enough that many now expect earnings growth to be slightly negative for the quarter vs. same quarter last year.  Interestingly, revenues are still projected to be up 5.4% in Q1 vs. Q1 of last year, so for earnings growth to go negative we are talking about a pretty significant decline in margins.

Full-year, I see earnings likely coming in around $162/share for all of 2018, and projections are now down to $168 or $169 for all of 2019 (so still up vs. last year, but just at a +4% annual clip).  I can easily see that expectation of $169 earnings from the S&P for 2019 coming down further, which would likely serve the purpose of allowing companies to lower expectations so as to outperform such later.

I would make two comments on this ...  (1) It is hard to believe that the P/E ratio of the overall market expands much if the growth-of-earnings for the overall index is declining or flattening.  To the extent one's strategy is heavily dependent on multiple expansion, it makes sense to wonder if market prices have a lot of the juice one is expecting already baked in; and (2) That said, it is inconceivable to me that one would formulate their investment strategy around multiple expansion ...  Earnings growth is, in my opinion, likely to end up outperforming the new round of pessimism around such, but under-perform last year's excessive optimism around such.  Our philosophy is to not speculate on what the entire broad market may deliver in aggregate earnings growth, and especially not in earnings valuation, but rather on the bottom-up dividend growth of individual well-run companies.

THAT changes the conversation entirely, as the conversation is always changed for the better when one chooses to focus on what can be known, studied, and understood vs. what is inherently unknowable and unpredictable.

What has the two-month rally in stocks done to valuations?  The S&P 500 now trades at 17.1x the last 12 months of earnings, and it trades at 16.1x the next 12 months of forecasted earnings.  The price-to-book value is 3.3x (vs. a 35-year average of 2.7x).  These metrics are all more attractive than they have been the last couple of years but are certainly off of their lower levels of Q4 2018.

And where do we go from here?

Earnings valuations are a reflection of what is anticipated from earnings in the future.  For earnings to grow further at this point in the cycle, continued revenue growth is needed, and greater productivity is needed to drive profit margins higher.  Both top-line revenue growth and greater productivity are reliant on continued growth in business investment.  The GDP numbers released last week for Q4 2018 were not just significant in that they reflected a real annualized growth number of +2.6%, enough to maintain a full year 2018 number above 3% real GDP growth, but also in that they reflected a really robust growth in business investment in Q4.

If you believe in omens ...

But there have been 30 times since the Great Depression that the market was up in both January and February, and in 30 out of 30 times (100%, because of math), the market ended the year up.  26 times the return was actually double-digit, and the average return is actually over +20% ...

The Energy sector and Industrials space lead the pack year-to-date in the stock market (each up ~16%), with consumer staples and health care the laggards at “only” +7.5%.

High yield leads the way in the bond market (far more equity-like than bond-like) with a ~6% YTD jump, and floating rate bank loans are just behind up ~3.75%.   Investment grade corporate bonds are also up nicely on the year as spreads have really tightened (~2% on the year).  So "spread" product has been the winner YTD, though conventional bonds also are positive on the year.

Now that is not what I expected ...

Around the world in developed markets, debt divided by EBITDA (earnings) has risen to 1.5x (not excessive but higher than it was nine years ago).  In emerging markets, though, debt/EBITDA has been reduced to just 0.8x, the lowest level in years.  Total world debt in the publicly traded universe (company debt, not sovereign debt) has risen $2.6 trillion since 2010, now standing at $8.7 trillion (very easy monetary policy around the globe has supported this).  But for that aggregate number to see its re-leveraging concentrated in developed markets, and it's de-leveraging in emerging markets, is surprising and contrary to the common narrative.

Debt in the land of the rising sun

We knew when we took on our Japanese dividend equity positions in late 2017 that the corporate economy there had experienced tremendous de-leveraging, and that many companies were running at a positive net cash position (cash on hand was greater than total debt).  This obviously provides higher dividend sustainability and less pricing pressure from economic distress.  That thesis remains intact, that Japan's debt/earnings ratios are far more conservative than the United States, Europe, or China.

It is so safe it became risky

But another dynamic that has unfolded worth monitoring for us dividend growth investors is how debt-to-earnings ratios have levered higher in the more defensive sectors in the United States.  This makes pressure from higher rates (even though that appears to be on hold for a while) more important.  We expect higher debt in the more capex sensitive sectors like energy, industrials, and utilities.  But the ratios have been on the rise in consumer staples and health care as well.  Developments like this reinforce the thesis that it must be intense bottom-up security analysis that drives selection decisions, to avoid taking on a risk that one previously thought sector selection helped to mitigate.  Where has debt-to-earnings most intensified in recent years?  The U.S. Utilities sector ...  Go figure.

The principle at play here is one I have studied my whole career, and one that really does beg for understanding (and in our actual portfolio management application, it begs for monitoring) - and that is this: A low-risk asset eventually becomes a high-risk asset when investors leverage up what they believe to be low risk.  This is a self-fulfilling prophecy - it does matter how low the operational leverage is; when financial leverage is put on low-risk assets, at some point their risk level inherently changes.

The emerging case for emerging markets

Readers will remember tha tone of our big themes for 2019 was the idea of emerging markets reversing their ill fortunes of 2018.  The case here has been enhanced in recent months, as we now have:

(1) A Fed sitting tight on policy tightening in the United States, which reduces the concerns about dollar shortages in emerging countries

(3) Continued valuations that are screamingly attractive

On that last point, note that every emerging markets stock market besides Brazil is trading below its 20-year average valuation ...

Did someone say European stimulus?

The announcement came in really close to my submission deadline for this weekly commentary so I may need to unpack it more next week, but Thursday's market action went negative when Europe announced greater monetary stimulus for their troubled economy and banking system.  Why would stimulus cause the market to react negatively, you ask?  Because it is an admission that things are not good.  It is can-kicking.  It jeopardizes credibility.  And it comes with a reduction in growth forecast (from 1.7% to 1.1%) ... (I am still trying to figure out whoever believed the EU was going to grow 1.7% this year).  The special lending facility to European banks they announced has one major problem behind it - European banks are not suffering from a liquidity crisis; some are struggling with a solvency crisis.  Confusing the two things is the root of all sorts of policy error.  More to come on this ...

How this chart plays in the next year will be the most important determinant of how economic growth plays in this stage of the cycle.  The China trade deal involving a repeal of last year's tariffs could be the biggest catalyst out there towards boosting capex here in the U.S.