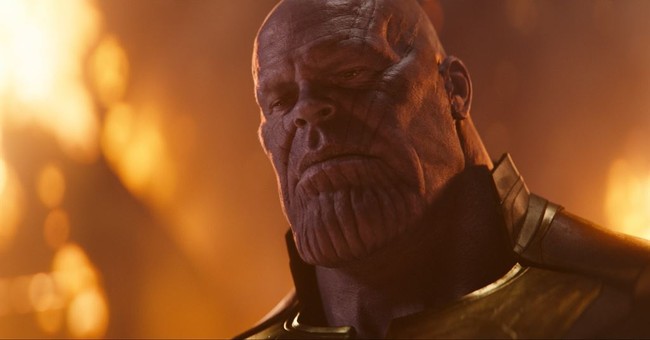 The Hollywood industry magazine of Variety recently reported that the movie Avengers: Infinity War has earned $1 billion faster than any other in cinematic history. This is great news, from two perspectives.

This war has been going on in America since before the founding, and in the rest of the world throughout recorded history. It has, for the most part, been growing and intensifying since the “Progressive Era” of the latter parts of the 19th century and early 20th.

The Economics Infinity War, in a nutshell, is a story of do-gooders versus good-doers of the economic variety. The former are all about intentions, the latter results.

In the Avenger’s Infinity War, Thanos is obviously the main villain but less obviously a do-gooder. He does not intend, nor view himself, to be or doing bad. He is very nearly a likeable anti-hero.

The main heroes are, of course, the Avengers themselves. They are a mix of do-gooders and good-doers: with Vision being largely the former; whilst Captain America is the latter here and throughout the series.

This is mainly due to unintended consequences. And our Big Government overlords have literally institutionalized this economic phenomenon. As classical liberal Claude Frédéric Bastiat wrote in 1850:

“A law [or any government intervention], gives birth not only to an effect, but to a series of effects. Of these effects, the first only is immediate; it manifests itself simultaneously with its cause – it is seen. The others unfold in succession – they are not seen.”

And most do-gooders in and since the “Progressive Era” have looked to power politics and for more government. This has resulted in less-and-less good-doers in free markets and from civil society. As historical sociologist Franz Oppenheimer wrote in 1908:

“There are two fundamentally opposed means whereby man, requiring sustenance, is impelled to obtain the necessary means for satisfying his desires. These are one’s own labor and the forcible appropriation of the labor of others … [ie] the economic means [versus] the political means.”

Economics = peace; politics = war. War = physically violent power over others or the credible threat thereof. Government = a monopoly on this. The bigger and more powerful government and politics get, then the more conflict there is inside and outside its jurisdiction. As economic historian Murray Rothbard wrote in 1970:

“A generic term is needed to designate an individual or group that commits invasive violence in society. We may call [an] invader, one who intervenes violently in free social or market relations. The term applies to any individual or group that initiates violent intervention in the free actions of persons and property. The State is uniquely the agency engaged in regularized violence on a large scale. Whether the invasion is ‘legal or not’ does not [matter, economically or ethically].”

And Democracy can’t seem to counter the titanic Welfare-Warfare State; it may even be making things worse.

The ‘mad’ Titan Thanos is very much the modern day do-gooder; one pursuing not “private greed” but the “greater good” for the sake of the environment and natural resources. His end = more resources for individuals. His means = less individuals for resources. His plan = violent de-population by 50%. His strategy = acquiring, by force, a monopoly over the ultimate violent power of the six infinity stones.

Fellow do-gooder of Spock from Star Trek may well approve of Thanos to some extent, given the former’s famous statement that “the needs of the many outweigh the needs of the few”. Vision also believes in this sort of worldview, until eventually convinced otherwise by Captain America.

Thanos’s grand scheme has an added bonus from the perspective of a 21st century Social Justice Warrior, besides being oh so green and sustainable, in that it is also very much equal and inclusive.

“[Thanos] does believe that he is doing something good for the universe. He believes suffering is based upon the fact that there's too many creatures and too few resources, and he believes that if he does this, he will bring balance, he'll bring peace, and that people will, their eyes will open to the fact that this was what was needed. It's very much the process of pruning a garden.”

“And he believes that he was genetically created to accomplish it. His body, his strength, his genius-level intelligence, his ability to fight, allows him the opportunity to be the one. So he's like [the] chosen [one].”

It would take at least one more article to properly explain why the (all-too-common) Thanos style approach to economic do-gooding is never economic good-doing. It can be said however, now and here, that the vast weight of history, economics and ethics is not on the side of Thanos and the modern Green Left. In short, free individuals in voluntary cooperation can better and more peacefully solve population growth and resource scarcity than governing elites (whether voter-appointed or self-appointed) using collective force.

The more people who get the opportunity to take the “Matrix red pill”, as a result of this brilliant movie, the better. It is also important to note that the Avengers Infinity War is not the first nor only front where the Economics Infinity War has been fought out in “pop culture”, as is attested to in the important book by Professor Paul Cantor entitled The Invisible Hand in Popular Culture – Liberty vs. Authority in American Film and TV.

Let me conclude with three quotes on population, resources and truth (in that order) from free-market economists Julian Simon and George Reisman as well as Christian theologian Ravi Zacharias:

“Dwindling resources, increasing pollution, starvation and misery – all this seems inevitable unless we curb population growth or otherwise cut back consumption of natural resources. Thomas Malthus reached this conclusion [over] two centuries ago, and popular thinking is now dominated by his gloomy theory. If humankind did not have a propensity to create more than it uses, the species would have perished a long time ago. This is the overarching [fact] that explains why events turn out in exactly the opposite fashion from what Malthus and his followers foresaw.”

“Every error contains an element of truth. For the sum 2 + 2, the correct answer is 4. Let us call it T. There is only one correct answer, but theoretically there are an infinite number of wrong answers. If you take one of the wrong answers, say 5, you would see that, while it is wrong, it is, in a somewhat perverted sense, dependent on the right answer – it has no original existence but is derived by adding 1 to T, that is, T+1. In the same way, another wrong answer, 3, is T-1. We could therefore say that, while the true answer is absolute, the incorrect answer is relative.”