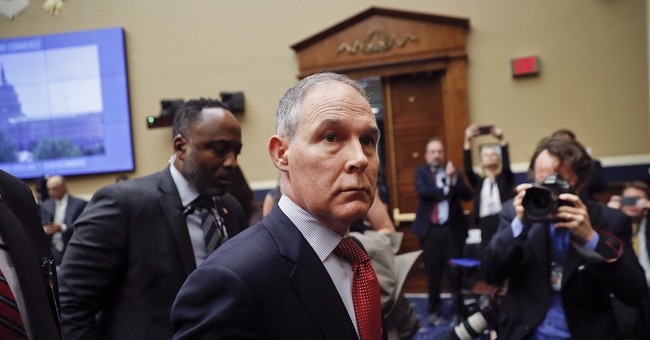 Controversial Administrator at the Environmental Protection Agency (EPA), Scott Pruitt, said in a press release on April 24th that: “The era of secret science at [the] EPA is coming to an end.” This is in the context of him signing a proposed rule to strengthen the science used in regulations issued by EPA. This is also in the context of Executive Order 13777 (issued in March 2017) which provides for regulatory reform of “those regulations that [do not] meet the standard of reproducibility.” The press release also stated:

“The rule will ensure that the regulatory science underlying Agency actions is fully transparent, and that underlying scientific information is publicly available in a manner sufficient for independent validation. This proposed rule is in line with the scientific community’s moves toward increased data sharing to address the ‘replication crisis’—a growing recognition that a significant proportion of published research may not be reproducible.”

Or, in the words of the independent National Academy of Scholars (NAS), there is an “Irreproducibility Crisis of Modern Science”. That is the title of their new report. The sub-title is “Causes, Consequences, and the Road to Reform”. This report was launched in Washington DC on April 17th by Representative Lamar Smith (R-TX), who is the Chairman of the House Committee on Science, Space, and Technology.

The Pruitt press release on the new rule to “stop secret science” also highlighted the impact of EPA regulations on the economy and thus the importance of cost benefit analysis (CBA). Regarding the economy, it said: “To apply the same standards to research that EPA says justify regulations affecting billions of dollars in economic activity and millions of human lives is essential for those regulations to truly be scientifically based.” Regarding CBA and in reference to Executive Order 13783 (also issued in March 2017), it stated:

“It is the policy of the United States that necessary and appropriate environmental regulations comply with the law, are of greater benefit than cost, when permissible, achieve environmental improvements for the American people, and are developed through transparent processes that employ the best available peer-reviewed science and economics.”

My previous piece in Townhall Finance, entitled “The Blue Wave is Questionable: Why That's Good For American Competitiveness”, mentioned CBA a few times in my appeal to President Trump for an “American Competition Policy” (including still fewer regulations and lower taxation). I also wrote that, this national policy to “make competition great again” in America, should be guided by the following principles:

#1) allowing for as much competition as possible;

#2) allowing for as much private sector as possible;

#3) allowing for as much government decentralisation as possible, from federal to state to local; and

#4) subjecting all significant expenditure of taxpayers’ money to CBA, including a “blue team versus red team” approach.

I devote two chapters, in my new book of the “Ten Principles of Regulation and Reform”, to CBA and the related concept of comparative risk assessment (CRA). They are both akin to two familiar tools in the world of finance – ie asset valuation and risk management, respectively. As I wrote in this book:

“CBA is a practical microeconomics method and frame-of-mind for better informing government policy (eg economic, social and environmental) decisions regarding net benefits or costs. The key to CBA is identifying and quantifying all of the relevant impacts of a given policy or investment (versus other scarce choices) as both benefits and costs, from one or more viewpoints, in terms of money and discounted for time.”

“CRA is a systematic process to estimate the level of risk related to some specific action or activity. It is commonly applied to a wide variety of human endeavours in which harm to people, the environment or economic interests might occur. [CRA] typically take[s] the shape of a ranked list with some issues identified as posing higher risks than others.”

“One of the most famous and serious attempted applications of a proper CBA system came in February 1981 as a result of Executive Order 12291 by President Ronald Reagan. Amongst other things, it aimed to: reduce the burdens of existing and future regulations; increase agency accountability for regulatory actions; provide for presidential oversight of the regulatory process; minimize duplication and conflict of regulations; and insure well-reasoned regulations. The process included regulatory agencies submitting proposed major regulations to the Office of Information and Regulatory Affairs (OIRA). In Australia, the federal Office of Best Practice Regulation (OBPR) uses a combination of CBA, regulatory impact statements and a business cost calculator.”

CBA and CRA nowadays need to include a “blue team versus red team” approach. Many credible folks have been pushing for some time for the EPA to take such an approach to the science underpinning their regulations and other actions. These advocates include organizations like CEI, CFACT and Heartland as well as scientists such as Dr Judith Curry. In her post of July 2017, Dr Curry asked “What is red teaming?” and answered with:

“Defined loosely, red teaming is the practice of viewing a problem from an adversary or competitor’s perspective. The goal of most red teams is to enhance decision making, either by specifying the adversary’s preferences and strategies or by simply acting as a devil’s advocate. Alternative analysis is the superclass of techniques of which red teaming may be considered a member. As with red teaming, these techniques are designed to help de-bias thinking, enhance decision making, and avoid surprise.”

“Both CBA and CRA importantly remind everybody concerned that scarcity and uncertainty are ever-present realities of economics, as well as politics, that can thus never be ignored. CBA and CRA increasingly includes a ‘blue team versus red team’ approach. The former generally takes a good government (or contemporary political reality) perspective whilst the latter takes a free market (or timeless economic reality) perspective. Of course, the ultimate goal of most libertarians, and many conservatives, is to align the former to the latter. By winning hearts and minds, from the top-down and bottom-up, in a plethora of logical and creative ways.”