Biden’s Boondoggles And The Burden Of Government Spending 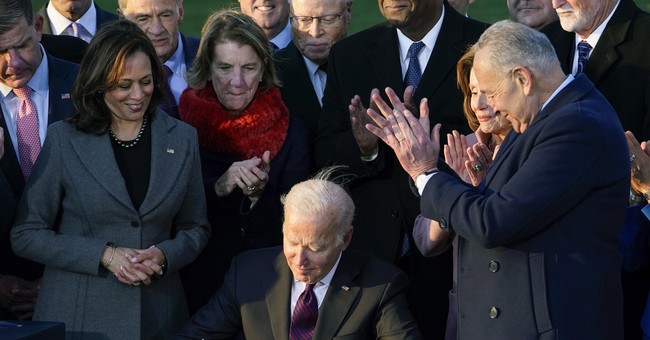 Then we got his $1 trillion-plus infrastructure boondoggle.

Now Congress may be on the verge of approving the President’s budget, which (if we use honest numbers) is a $5 trillion plan to expand the welfare state.

So it’s hardly a surprise that recent changes will lead to a much-larger burden of government spending.

This is bad news for our economy, as measured by my recent study (with similar findings from a wide range of academics – as well as normally left-leaning bureaucracies such as the IMF, World Bank, and OECD).

Here are some excerpts from a very depressing article in the Economist, starting with some discussion of how Biden’s spending binge is similar to the mistakes made by other nations.

President Joe Biden is building on what started as emergency pandemic-related policy, expanding the child-tax credit, creating a universal federally funded child-care system, subsidising paid family leave and expanding Obamacare. America’s government spending remains somewhat below the developed-world average. But this change is not just a matter of catching up; the target is moving. Government spending as a share of gdp in the oecd as a whole has consistently inched higher in the six decades since the club was formed in 1961.

There’s then some discussion about how a few nations – most notably Sweden and New Zealand – enjoyed period of genuine spending restraint, but accompanied by depressing observations about how fiscal responsibility is very rare.

Examples of genuine state retrenchment in developed countries are few and far between. Sweden managed it in the 1980s. In the early 1990s Ruth Richardson, then New Zealand’s finance minister, cut the size of the state drastically. …State spending is now six percentage points lower as a share of gdp than it was in 1990. But this is a rare achievement, and perhaps one doomed to pass. …This is a sorry state of affairs if you believe that low taxes and small government are the right, and possibly the only, conditions for reliable, enduring economic growth. …an argument made by Friedrich Hayek, an Austrian philosopher, Milton Friedman, an American economist, and others in the mid-20th century.

There’s also some historical analysis showing how the burden of government used to be relatively minor.

Here’s the aforementioned chart 2, and there are a lot of depressing numbers, though notice how Switzerland does better than other nations.

I’ve previously shared a version of this data, calling it the “world’s most depressing chart” – all of which was made possible by the imposition of income taxes.

But there is some good news. The ever-rising fiscal burden of government has been somewhat offset by reductions in other bad policies.

Governments have not grown more powerful by all measures. Bureaucrats no longer, as a rule, set wages or prices, nor impose strict currency controls, as many did in the 1960s or 1970s. In recent decades the public sector has raised hundreds of billions of dollars from privatisations of state assets such as mines and telecoms networks. If you find it faintly amusing to hear that, from 1948 to 1984, the British state ran its own chain of hotels, that is because the “neoliberal” outlook on the proper place of government has triumphed.

Last but not least, there’s some discussion of “public choice,” which explains why politicians and bureaucrats have incentives to expand the size and scope of government.

Governments and bureaucrats are at least partly self-interested: “public-choice theory” says that unrestrained bureaucracies will defend their turf and seek to expand it. …Politicians have their own incentives to expand the state. It is generally more rewarding for a politician to introduce a new programme than it is to close an old one down; costs are spread across all taxpayers while benefits tend to be concentrated, thus eliciting gratitude from interest groups

I’ll close by reiterating my warning that ever-rising spending burdens not only lead to less growth, but they also will lead to Greek-style fiscal crises.

Europe will get hit first, but it’s just a matter of time before the United States suffers a similar fate.

P.S. There is a simple solution to avoid such crises, and a specific policy to achieve that solution. But don’t hold your breath waiting for politicians to tie their own hands.