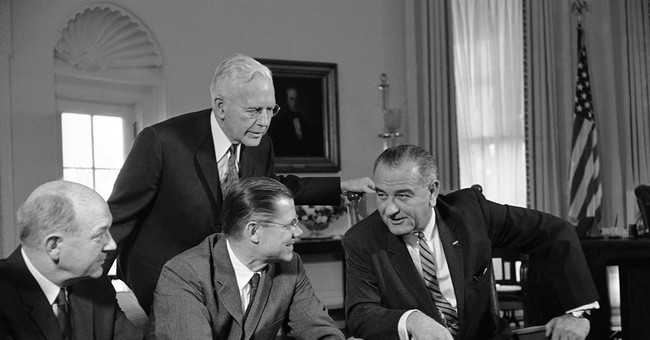 When asked to list the worst presidents of the 20th century, Woodrow Wilson, Franklin Roosevelt, and Richard Nixon belong on the list.

But this Reason video with Amity Shlaes shows why Lyndon Johnson also is among the worst of the worst.

You should watch every second of the video, but if you don’t have 33 minutes to spare, here’s a helpful summary.

Johnson declared war on poverty, jacked up federal spending on education, and pushed massive new entitlement programs, including Medicare and Medicaid, which promised to deliver high-quality, low-cost health care to the nation’s elderly and poor. …But did the Great Society achieve its goals of eradicating poverty, sheltering the homeless, and helping all citizens participate more fully in the American Dream? In Great Society: A New History, Amity Shlaes argues that Lyndon Johnson’s bold makeover of the government was a massive failure.

Massive failure may be an understatement.

LBJ’s two big entitlement programs, Medicare and Medicaid, are the biggest reason why America will suffer a future fiscal crisis.

And his so-called War on Poverty was a disaster for both taxpayers and poor people.

How much of a disaster?

Let’s augment Amity’s analysis with these excerpts from Jason Riley’s column in the Wall Street Journal.

Entitlement programs were dramatically expanded in the 1960s in the service of a war on poverty, yet poverty fell at a slower rate after the Great Society initiatives were implemented, and overall dependency on the government for food, shelter and other basic necessities increased. …Liberals pitch these social programs in the name of helping underprivileged minority groups and reducing inequality, but the lesson of the 1960s is that government relief can put in place incentives that have the opposite effect. Between 1940 and 1960 the percentage of black families living in poverty declined by 40 points… No welfare program has ever come close to replicating that rate of black advancement… Moreover, what we experienced in the wake of the Great Society interventions was slower progress or outright retrogression. Black labor-force participation rates fell, black unemployment rates rose, and the black nuclear family disintegrated. In 1960 fewer than 25% of black children were being raised by a single mother; within four decades, it was more than half. …The welfare state is often discussed in relation to its effect on racial and ethnic minorities, yet crime, single parenting and drug abuse also increased among poor whites in the aftermath of the Great Society. When the government indulges and subsidizes counterproductive behavior, we tend to get more of it.

What’s depressing is that Biden wants to replicate LBJ’s mistakes. His new entitlements will mean slower growth and more dependency.

P.S. Amity Shlaes also has done great work to highlight the achievements of one of America’s best presidents.