The Real (And Growing) Problem With Social Security 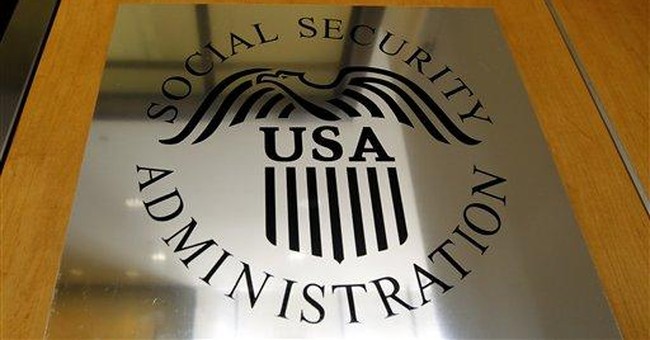 In an ideal world, Americans would have personal retirement accounts, just like workers in Australia, Sweden, Chile, Hong Kong, Israel, Switzerland, and a few dozen other nations.

But we’re not in that ideal world. We are forced to participate in a Ponzi Scheme known as Social Security.

By the way, that’s not necessarily a disparaging description. A Ponzi Scheme can work if there are always enough new people in the system to pay off the old people.

But because of demographic changes (increasing lifespans and decreasing birthrates), that’s not what we have in the United States.

And this is why Social Security faces serious long-run problems.

How serious? The Social Security Administration finally released the annual Trustees Report. This document has a wealth of data on the program’s financial condition, and Table VI.G9 is where the rubber meets the road.

As you can see from this chart, there will be an ever-increasing burden of Social Security taxes and spending over the next 75 years. And these numbers are adjusted for inflation!

The good news (relatively speaking) is that the economy also will be growing over the next 75 years, both in nominal terms and inflation-adjusted terms.

The bad news is that spending on Social Security will grow at a faster rate, so the program will consume a larger share of the economy’s output.

And because Social Security spending is growing faster than the economy (and also faster than tax revenue), this next chart shows there is going to be more and more red ink in the future. Once again, you’re looking at inflation-adjusted data.

As indicated by the chart’s title, the cumulative shortfall over the next 75 years is nearly $48 trillion. That’s a lot of money, even by Washington standards.

I’ll conclude by observing that today’s column focuses on the big-picture fiscal problems with Social Security.

But let’s not forget the program’s second crisis, which is the fact that Americans are deprived of the ability to enjoy much higher levels of retirement income.

Certain groups are particularly harmed by this aspect of the current program, including minorities, women, older workers, and low-income workers.

P.S. Our friends on the left argue that the program’s fiscal problems (the first crisis) can be solved with tax increases. Perhaps that is true, but it will mean a weaker economy and it will exacerbate the second crisis by forcing workers to pay more to get less.

P.P.S. I once made a $16 trillion dollar mistake on national TV when discussing Social Security’s shaky finances.

P.P.P.S. Much of the news coverage about the Trustees Report has focused on the year the Social Security Trust Fund supposedly runs out of money. But this is sloppy journalism since the Trust Fund has nothing but IOUs (as illustrated by this joke).