A Gold Standard Vs. The Federal Reserve's Fiat Money 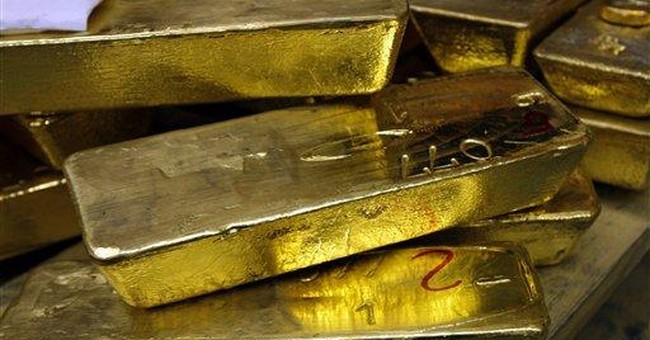 I’m not a big fan of the Federal Reserve, mostly because of its Keynesian monetary policy.

Indeed, the Federal Reserve deserves considerable blame for some of the economy’s worst episodes of the past 100-plus years – most notably the Great Depression, 1970s stagflation, and the 2008 financial crisis.

So what’s the solution?

I’ve previously pointed out that the classical gold standard has some attractive features but is not politically realistic.

But perhaps it’s time to reassess.

In a column for today’s Wall Street Journal, Professors William Luther and Alexander Salter explain the differences between a gold standard and today’s system of fiat money (i.e., a monetary system with no constraints).

Under a genuine gold standard, …Competition among gold miners adjusts the money supply in response to changes in demand, making purchasing power stable and predictable over long periods. The threat of customers redeeming notes and deposits for gold discourages banks from overissuing… Fiat dollars aren’t constrained by the supply of gold or any other commodity. The Federal Reserve can expand the money supply as much or as little as it sees fit, regardless of changes in money demand. When the Fed expands the money supply too much, an unsustainable boom and costly inflation follow.

They then compare the track records of the two systems.

…nearly all economists believe the U.S. economy has performed better under fiat money than it would have with the gold standard. This conventional wisdom is wrong. The gold standard wasn’t perfect, but the fiat dollar has been even worse. …in practice, the Fed has failed to govern the money supply responsibly. Inflation averaged only 0.2% a year from 1790 to 1913, when the Federal Reserve Act passed. Inflation was higher under the Fed-managed gold standard, averaging 2.7% from 1914 to 1971. It has been even higher without the constraint of gold. From 1972 to 2019, inflation averaged 4%. …the Fed…has also become less predictable. In a 2012 article published in the Journal of Macroeconomics, George Selgin, William D. Lastrapes and Lawrence H. White find “almost no persistence in the variance of inflation prior to the Fed’s establishment, and a very high degree of persistence afterwards.” …One might be willing to accept the costs of higher inflation and a less predictable price level if a Fed-managed fiat dollar reduced undesirable macroeconomic fluctuation. But that hasn’t happened. Consider the past two decades. The early 2000s had an unsustainable boom, as the Fed held interest rates too low for too long.

There was also a column on this issue in the WSJ two years ago.

Richard Nixon announced the suspension of the Treasury’s standing offer to foreign governments to exchange dollars for gold, or vice versa, at the unvarying rate of $35 an ounce. The date was Aug. 15, 1971. Ever since, the dollar has been undefined in law. …In the long sweep of monetary history, this is a new system. Not until relatively recently did any central bank attempt to promote full employment and what is called price stability (but is really a never-ending inflation) by issuing paper money and manipulating interest rates. …a world-wide monetary system based on the scientifically informed discretion of Ph.D. economists. The Fed alone employs 700 of them.

A 20th-century scholar, reviewing the record of the gold standard from 1880-1914, was unabashedly admiring of it: “Only a trifling number of countries were forced off the gold standard, once adopted, and devaluations of gold currencies were highly exceptional. Yet all this was achieved in spite of a volume of international reserves that, for many of the countries at least, was amazingly small and in spite of a minimum of international cooperation . . . on monetary matters.” …Arthur I. Bloomfield wrote those words, and the Federal Reserve Bank of New York published them, in 1959.

The new approach, which Grant mockingly calls the “Ph.D. standard,” gives central bankers discretionary power to do all sorts of worrisome things.

The ideology of the gold standard was laissez-faire; that of the Ph.D. standard (let’s call it) is statism. Gold-standard central bankers bought few, if any, government securities. Today’s central bankers stuff their balance sheets with them. In the gold-standard era, the stockholders of a commercial bank were responsible for the solvency of the institution in which they held a fractional interest. The Ph.D. standard brought the age of the government bailout and too big to fail.

By the way, the purpose of today’s column isn’t to unreservedly endorse a gold standard.

Such as system is very stable in the long run but can lead to short-term inflation or deflation based on what’s happening with the market for gold. And those short-term fluctuations can be economically disruptive.

I was messaging earlier today with Robert O’Quinn, the former Chief Economist at the Department of Labor (who also worked at the Fed) and got this reaction to the Luther-Salter column.

Which is better matching the long-term growth of the economy and the demand for money? The profitability of gold mining or central bank decision-making? A good monetary rule may be better than a classical gold standard. The difficulty is sustaining a good rule.

The ;problem, of course, is that I don’t trust politicians (and their Fed appointees) to follow a good rule.

The bottom line is that we have to choose between two imperfect options and decide which one has a bigger downside.

P.S. Since a return to a classical gold standard is highly unlikely (and because the libertarian dream of “free banking” is even more improbable), the best we can hope for is a president who 1) makes good appointments to the Fed, and 2) supports sound-money policies even when it means short-run political pain. We’ve had one president like that in my lifetime.