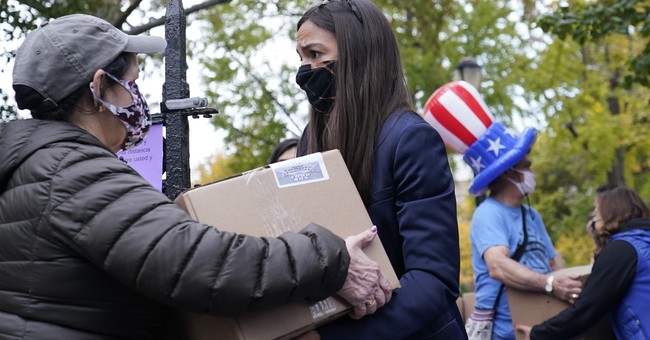 Over the past couple of years, one of the most disturbing – and also revealing – things to happen in Washington is when Congresswoman Alexandria Ocasio-Cortez proposed giving more money to people “unwilling to work.”

As discussed in this interview, the left seems to want more dependency.

This is a very unfortunate development. Just four years ago, Joe Biden rejected no-strings-handouts such as “basic income.”

The obvious takeaway is that many politicians in Washington want to create a society where government dependency is normal and desirable.

That may be a good vote-buying strategy, but it has horrible consequences. Both morally and economically.

Let’s address one of the specific issues from the interview.

Regarding bonus unemployment benefits. I warned that we should be careful about over-interpreting short-run data. And that’s especially true because the states providing extra payments for joblessness are generally the states that also had the most onerous lockdown policies during the pandemic.

So, if unemployment is dropping in a state, is it because extra benefits have been cancelled, or is it a result of relaxed lockdown policies? Or is it something else, like lower tax rates?

One obvious way of trying to answer these questions is to ask people why they’re not working.

Here are the results of a recent poll, as reported by Λxios.

About 1.8 million out-of-work Americans have turned down jobs because of the generosity of unemployment insurance benefits, according to Morning Consult poll results released Wednesday. …U.S. businesses have been wrestling with labor supply shortages as folks capable of working have opted not to work for a variety of reasons. … Morning Consult surveyed 5,000 U.S. adults from June 22-25, 2021. Of those actively collecting unemployment benefits, 29% said they turned down job offers during the pandemic. In response to a follow-up question, 45% of that group said they turned down jobs specifically because of the generosity of the benefits.

So our friends on the left tell us that bigger handouts have no adverse economic consequences while the people getting the payments openly admit that they aren’t working because they can live off the taxpayers.

I know which group I believe.

P.S. Both this Wizard-of-Id parody and this cartoon do a great job of showing the economics of incentives.

P.P.S. Since the interview also included some discussion of basic income, here’s a recent study showing how those universal handouts would cripple work incentives.

Share this on Facebook
Tweet
DeSantis Blasts Biden: 'Why Don’t You Do Your Job?'
Katie Pavlich|
To No One's Surprise, COVID Has Returned to Wuhan...And It's Not the First Time
Matt Vespa|
Psaki Again Blames Republicans for Crime Wave While Defending ATF Nominee Chipman
Spencer Brown|
This Swing District Democrat Has an Uncomfortable Connection to Group Promoting Critical Race Theory
Rebecca Downs|
Clown Town: COVID Experts Get Buckshot to the Face Over Latest Advice About Wearing Masks at Home
Matt Vespa|
Only a Handful of Dem Governors Have Called on Andrew Cuomo to Resign
Madeline Leesman|

DeSantis to Biden: Damn right I'm standing in your way by opposing lockdowns
Hotair
Omigosh, the Delta Variant Now Has a Variant and You Know What That Means
Redstate