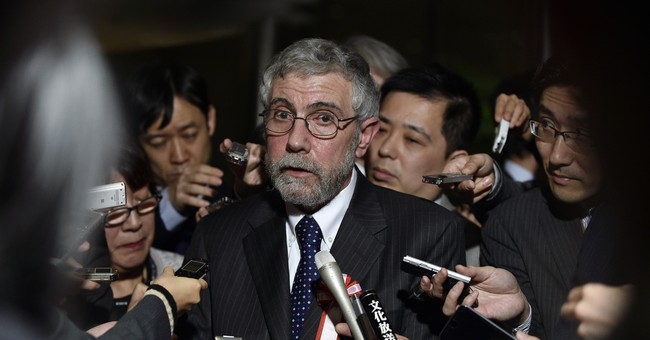 At least not totally.

He’s acknowledged, for instance, that there is a Laffer Curve and that tax rates can become so onerous that tax revenues actually decline.

Now he’s had another encounter with the real world.

In a column that was mostly a knee-jerk defense of Biden’s class-warfare tax policy, Krugman confessed yesterday that big government ultimately means big tax increases for lower-income and middle-class people.

…is trying to “build back better” by taxing only the very affluent feasible? Is it wise? …There’s a good case that the kind of society progressives want us to become, with a very strong social safety net, can’t be paid for just by taxing the rich. A country like Denmark, for example, does have a high top tax rate… But Denmark also has very high middle-class taxation, in particular a 25 percent value-added tax, effectively a national sales tax. …the fact that even the Nordic countries feel compelled to raise a lot of money from the middle class suggests that there are limits…to how much you can raise just by taxing the rich. So if you want Medicare for all, Nordic levels of support for child care and families in general, and so on, just raising taxes on the 400K-plus elite won’t get you there.

It may not happen often, but Krugman is completely correct.

This chart from Brian Riedl shows that government spending already was on track to become a bigger burden for the American economy, and Biden is proposing to go even faster in the wrong direction.

The growing gap between the blue lines and red lines implies giant tax increases. At the risk of understatement, there’s no way to finance that ever-expanding government by just pillaging upper-income taxpayers.

By the way, Krugman is right about big government leading to higher taxes on ordinary people, but he’s wrong about the desirability of that outcome.

He wants us to think that big government means a “better America,” but all the economic data tells a different story. A bigger fiscal burden means much lower living standards.

P.S. If you want another example of Krugman being right on a fiscal issue, click here.