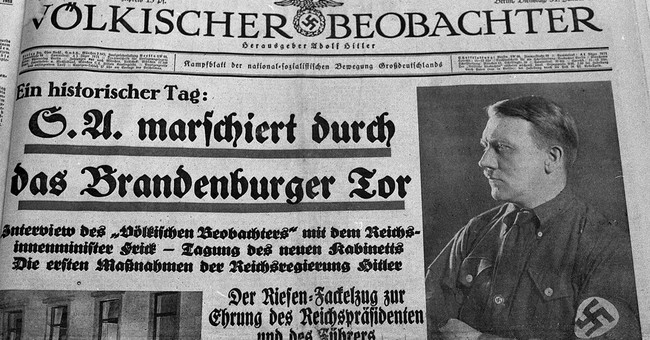 How should Nazism be classified, particularly when compared to socialism? Are these ideologies at opposite ends of a spectrum, or are they simply different sides of the same collectivist coin?

In my humble opinion, both views are correct, which is why I think this triangle is the best way to classify various ideologies.

But both ideologies are against free markets and both put the state over the individual, so they are far away from libertarianism (or classical liberalism) when looking from top to bottom.

These different ways of looking at the issue explain why Glenn Kessler of the Washington Post created a controversy when he decided to “fact check” this statement from gadfly Congresswoman Marjorie Taylor Greene.

According to Kessler, Greene deserved “four Pinocchios” for asserting that Hitler and the Nazis were socialists.

The full name of Hitler’s party was Nationalsozialistische Deutsche Arbeiterpartei. In English, that translates to National Socialist German Workers’ Party. But it was not a socialist party; it was a right-wing, ultranationalist party dedicated to racial purity, territorial expansion and anti-Semitism — and total political control. …the 1920 Nazi party platform…there are…passages denouncing banks, department stores and “interest slavery.” That could be seen as “a quasi-Marxist rejection of free markets. But these were also typical criticisms in the anti-Semitic playbook …Hitler adamantly rejected socialist ideas, dismantled or banned left-leaning parties and disapproved of trade unions. …We suggest Greene brush up on her history… She earns Four Pinocchios.

This is a remarkable. The Nazis called themselves socialists, yet Kessler says Greene is lying for saying the same thing.

I’m not the only one to notice this bizarre example of media bias.

A ‘fact-checker’ at Washington Post, Glenn Kessler, asserts that a Republican Member of the House of Representatives is wrong in a recent comment on Hitler’s national socialism. It is not, as she had said, a branch of socialism. Kessler writes that the German Nazi Party, despite its name (the National-Socialist Workers’ Party), ‘was not a socialist party…’ In support of his case, Kessler quotes the first eight of the 25 points in the 1920 Nazi political programme… He lukewarmly concedes that in the Nazi programme there were also passages denouncing capitalism. But why does he not quote them as well? …It is hard not to discern the socialist overtones in these points. Why did the Washington Post fact-checker not quote them in full like the first eight? …according to Hayek national socialism could be considered to be the rebellious socialism of the lower middle class… Traditional socialists, democrats as well as communists, shared with Hitler’s national socialists the belief that conscious organisation had to replace the spontaneous order… Hayek is certainly right that there are strong family resemblances between traditional socialism and national socialism. Both are totalitarian creeds.

Glenn Kessler, the Post‘s official fact checker, …analyzes various statements and claims to determine whether they are true. If he finds them false, he awards them Pinocchios, with the number of Pinocchios depending on the degree of falsehood. The highest number of Pinocchios he awards is 4. On May 29, Glenn Kessler earned his own Pinocchios. …Nazis…really were a socialist party. …Kessler attempts to buttress his case by listing the first 8 of 25 planks in the 1920 Nazi Party platform. Those planks do help his case that the Nazis were anti-Semitic (duh) and nationalists (ditto duh). But what about the other 17 planks? …pretty socialistic.

Here are some of those planks that Kessler conveniently omitted.

11. Abolition of unearned (work and labour) incomes. Breaking of rent-slavery. …

13. We demand the nationalization of all (previous) associated industries (trusts).

14. We demand a division of profits of all heavy industries.

15. We demand an expansion on a large scale of old age welfare. …

17. We demand a land reform suitable to our needs, provision of a law for the free expropriation of land for the purposes of public utility, abolition of taxes on land and prevention of all speculation in land.

By the way, the Nazis didn’t merely advocate for socialism in an early platform. They also implemented statist policies once they took power.

Back in 2007, Michael Moynihan wrote about the Nazi welfare state in a book review for Reason.

…the Nazis maintained popular support—a necessary precondition for the “final solution”—not because of terror or ideological affinity but through a simple system of “plunder,” “bribery,” and a generous welfare state. …Requisitioned Jewish property, resources stolen from the conquered, and punitive taxes levied on local businesses insulated citizens from shortages and allowed the regime to create a “racist-totalitarian welfare state.” …To understand Hitler’s popularity, …”it is necessary to focus on the socialist aspect of National Socialism.” …Adolf Eichmann viewed National Socialism and communism as “quasi-siblings,” explaining in his memoirs that he “inclined towards the left and emphasized socialist aspects every bit as much as nationalist ones.” As late as 1944, Propaganda Minister Josef Goebbels publicly celebrated “our socialism,” reminding his war-weary subjects that Germany “alone [has] the best social welfare measures.” Contrast this, he advised, with the Jews, who were the very “incarnation of capitalism.” …Hitler implemented a variety of interventionist economic policies, including price and rent controls, exorbitant corporate taxes, frequent “polemics against landlords,” subsidies to German farmers…and harsh taxes on capital gains, which Hitler himself had denounced as “effortless income.”

The bottom line is that the Nazis are justifiably hated for reasons that have nothing to do with economic policy.

But it’s also true that their economic policy was a version of socialism (fascism involves government control rather than government ownership, but the result is the same).

Here are two videos from Prager University for those who want more information. First, we can learn about communism and Nazism.

Second, we can learn about the history of fascism.

Let’s wrap up by quoting George Will on the interrelated ideas of fascism, Nazism, and socialism.

Fascism…was a recoil against Enlightenment individualism: the idea that good societies allow reasoning, rights-bearing people to define for themselves the worthy life. …Mussolini, a fervent socialist until his politics mutated into a rival collectivism, distilled fascism to this: “Everything within the state, nothing outside the state, nothing against the state.” The Nazi Party — the National Socialist German Workers’ Party — effected a broad expansion of socialism’s agenda…

Last, but not least, here’s a reminder that we should be very wary of demagogues who promise goodies.

P.S. Kessler should have “fact checked” the last part of Rep. Greene’s statement. As much as I dislike “democratic socialism,” today’s Democrats are not trying to impose a totalitarian system.