The Never-Ending Economic Tragedy Of Argentina 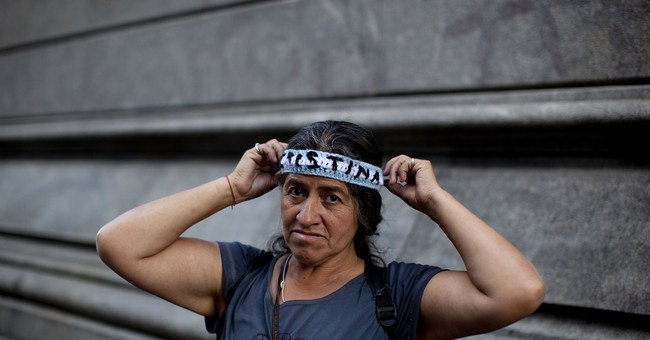 What nation serves as the most powerful example of how statism can wreck an economy and impoverish people?

Those are all good choices, but perhaps Argentina is the best example (or should we say worst example?).

If you go back 100 years, Argentina was one of the world’s richest nations. And, as recently as the late 1940s, it still ranked in the top 10 for per-capita economic output.

But then the nation veered to the left. Whether you call it Peronism or democratic socialism, there was a huge increase in the size and scope of government.

As you might expect, the results were terrible. Argentina since then has been the world’s worst-performing economy.

But things can always get worse.

In an article for National Review, Antonella Marty points out that President Fernandez is doing his part to continue the awful pattern of statism-generated crises in Argentina.

…it was already challenging for Argentines to maintain businesses and overcome the endless regulations and bureaucratic hurdles that comprise everyday life…the government of Alberto Fernández and Cristina Fernández de Kirchner has made matters worse… In brief: …The Argentine economy has been in recession since 2018. …Argentina ranks 126th in the World Bank’s Doing Business index, between Paraguay and Iran. It takes about five months to open a business in Argentina. …Argentina has public debt approaching 90 percent of GDP. …Argentina has one of the highest inflation rates in the world: 36.6 percent over the past year. Every month, wages steadily decline, and every 10 or 12 years, like clockwork, the Argentine peso crashes, diminishing household savings. …Argentine debt still trades at a steep discount, because investors rightfully recognize the dim prospects for a government that limits the creation of wealth through aggressive taxation, price controls, currency regulation, and skyrocketing levels of public spending. Argentina still does not realize the problem that has trapped us in a cycle of repeated crises for decades: the government. …The “solutions” invoked by left-wing Peronists — the progeny of the populist 20th-century president Juan Perón — always involve increased state intervention in the economy. Alberto Fernández has done nothing different. …As always, Argentina cannot solve the problem of big government with more government.

Perhaps the worst policy under Fernandez is the new wealth tax.

In an article for the Washington Post, Diego Laje and Anthony Faiola look at Argentina’s embrace of this destructive levy.

At least as far back as the 1940s, …class conflict has lingered just below the surface of this chronically indebted South American state. To dig itself out of a gaping fiscal hole made worse by the pandemic, Argentina is issuing a clarion call now echoing around the globe: Make the rich pay. …So why not, proponents argue, foist the cost of the epic global recession caused by the pandemic onto those who can most afford it? …Argentina, saddled with crippling debt exacerbated by the pandemic, adopted a one-time special levy on the rich in December, demanding up to 3.5 percent of the total net worth of citizens who hold at least $3.4 million of assets. …Argentina is turning to its wealthiest citizens after having lost the faith of foreign investors, and with little other means to plug financial holes. …fearful Argentines hoarded U.S. dollars, and the government, as it so often has in the past, turned to the printing press to make ends meet. Now Argentina is seeking another major bailout from the IMF… In recent months, Walmart, Latam Airlines, Uber Eats, Norwegian Airlines and Nike have reduced operations in Argentina or left the country. …Argentina crashed from its place at the top of the global wealth chain long ago, in a succession of economic crises, dictatorships and bruising political battles between the ruralistas and the Peronistas.

The reporters don’t make the obvious connection between Peronist policies and the economy’s decline, but at least readers learn that Argentina hasn’t been doing well.

And the authors deserve credit for acknowledging that there are serious concerns about how wealth taxes can undermine prosperity.

But wealth taxes are notoriously tricky to get right, and they have a history of deeply negative side effects that can seriously undermine their intent. In France, for instance, a long-standing wealth tax, repealed in 2018, was blamed for an increase in tax dodging and the flight of thousands of the country’s richest citizens. …A decade ago, 12 of the world’s most-developed countries had wealth taxes on the books. The number has fallen to three.

I’m tempted to say the big takeaway from today’s column is that wealth taxes are a bad idea.

That’s true, of course, but the bigger lesson we should absorb is that a rich nation can become a poor nation.

Simply stated, if a government imposes enough bad policies – as has been the case in Argentina – then it’s just a matter of time before it declines relative to nations with sensible policies.

Perhaps there’s a lesson there for Joe Biden?

P.S. I sometimes fantasize that Argentina can experience a Chilean-style economic revitalization, but that seems very unlikely since even supposedly right-wing politicians pursue statist policies.

P.P.S. Though there is a small sliver of libertarianism in Argentina.

Kyrsten Sinema Throws the Left's Standard Right Back in Their Face, and the Freak out Continues
Redstate
Ilhan Omar complains: We’re sending money to fewer people than the Trump administration did
Hotair