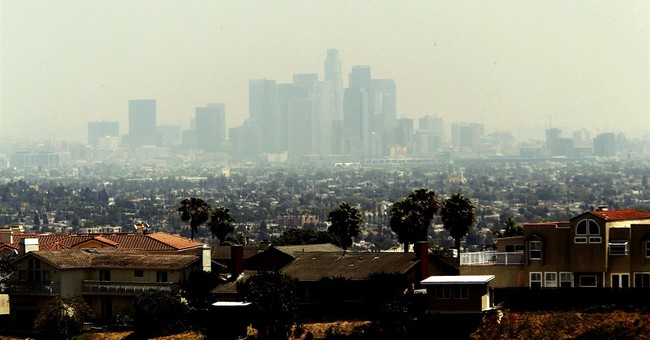 There will be a lot of information in today’s column, so if you’re pressed for time, here are three sentences that tell you what you need to know.

California has all sorts of natural advantages over Texas, especially endless sunshine and beautiful topography.

Texas has better government policy than California, most notably in areas such as taxation and regulation.

Since people are moving from the Golden State to the Lone Star State, public policy seems to matter more than natural beauty.

Now let’s look at a bunch of evidence to support those three sentences.

We’ll start with an article by Joel Kotkin of Chapman University.

If one were to explore the most blessed places on earth, California, my home for a half century, would surely be up there. …its salubrious climate, spectacular scenery, vast natural resources… President Biden recently suggested that he wants to “make America California again”. Yet…he should consider whether the California model may be better seen as a cautionary tale than a roadmap to a better future… California now suffers the highest cost-adjusted poverty rate in the country, and the widest gap between middle and upper-middle income earners. …the state has slowly morphed into a low wage economy. Over the past decade, 80% of the state’s jobs have paid under the median wage — half of which are paid less than $40,000…minorities do better today outside of California, enjoying far higher adjusted incomes and rates of homeownership in places like Atlanta and Dallas than in San Francisco and Los Angeles. Almost one-third of Hispanics, the state’s largest ethnic group, subsist below the poverty line, compared with 21% outside the state. …progressive…policies have not brought about greater racial harmony, enhanced upward mobility and widely based economic growth.

Next we have some business news from the San Francisco Chronicle.

Business leaders fear tech giant Oracle’s recent announcement that it is leaving the Bay Area for Austin, Texas, will lead to more exits unless some fundamental political and economic changes are made to keep the region attractive and competitive. “This is something that we have been warning people about for several years. California is not business friendly, we should be honest about it,” said Kenneth Rosen, chairman of the UC Berkeley Fisher Center for Real Estate and Urban Economics. Bay Area Council President Jim Wunderman said… “From consulting companies to tax lawyers to bankers and commercial real estate firms, every person I talk with who provides services to big Bay Area corporations are telling me that their clients are strategizing about leaving…” Charles Schwab, McKesson and Hewlett Packard Enterprise have all exited the high-cost, high-tax, high-regulation Bay Area for a less-expensive, less-regulated and business-friendlier political climate. All of them rode off to Texas. …the pace of the departures appears to be increasing. …A recent online survey of 2,325 California residents, taken between Nov. 4 and Nov. 23 by the Public Policy Institute of California, found 26% of residents have seriously considered moving out of state and that 58% say that the American Dream is harder to achieve in California than elsewhere.

Are California politicians trying to make things better, in hopes of stopping out-migration to places such as Texas?

Not according to this column by Hank Adler in the Wall Street Journal.

California’s Legislature is considering a wealth tax on residents, part-year residents, and any person who spends more than 60 days inside the state’s borders in a single year. Even those who move out of state would continue to be subject to the tax for a decade… Assembly Bill 2088 proposes calculating the wealth tax based on current world-wide net worth each Dec. 31. For part-year and temporary residents, the tax would be proportionate based on their number of days in California. The annual tax would be on current net worth and therefore would include wealth earned, inherited or obtained through gifts or estates long before and long after leaving the state. …The authors of the bill estimate the wealth tax will provide Sacramento $7.5 billion in additional revenue every year. Another proposal—to increase the top state income-tax rate to 16.8%—would annually raise another $6.8 billion. Today, California’s wealthiest 1% pay approximately 46% of total state income taxes. …the Legislature looks to the wealthiest Californians to fill funding gaps without considering the constitutionality of the proposals and the ability of people and companies to pick up and leave the state, which news reports suggest they are doing in large numbers. …As of this moment, there are no police roadblocks on the freeways trying to keep moving trucks from leaving California. If A.B. 2088 becomes law, the state may need to consider placing some.

But what isn’t satire is that people are fleeing the state (along with other poorly governed jurisdictions).

Interestingly, even the New York Times recognizes that there is a problem in the state that used to be a role model for folks on the left.

Opining for that outlet at the start of the month, Brett Stephens raised concerns about the Golden State.

…today’s Democratic leaders might look to the very Democratic state of California as a model for America’s future. You remember California: People used to want to move there, start businesses, raise families, live their American dream. These days, not so much. Between July 2019 and July 2020, more people — 135,400 to be precise — left the state than moved in… No. 1 destination: Texas, followed by Arizona, Nevada and Washington. Three of those states have no state income tax.

California, by contrast, has very high taxes. Not just an onerous income tax, but high taxes across the board.

Californians also pay some of the nation’s highest sales tax rates (8.66 percent) and corporate tax rates (8.84 percent), as well as the highest taxes on gasoline (63 cents on a gallon as of January, as compared with 20 cents in Texas).

The state ranks 21st in the country in terms of spending per public school pupil, but 27th in its K-12 educational outcomes. It ties Oregon for third place among states in terms of its per capita homeless rate. Infrastructure? As of 2019, the state had an estimated $70 billion in deferred maintenance backlog. Debt? The state’s unfunded pension liabilities in 2019 ran north of $1.1 trillion, …or $81,300 per household.

Makes you wonder whether the rest of the nation should copy that model?

Democrats hold both U.S. Senate seats, 42 of its 53 seats in the House, have lopsided majorities in the State Assembly and Senate, run nearly every big city and have controlled the governor’s mansion for a decade. If ever there was a perfect laboratory for liberal governance, this is it. So how do you explain these results? …If California is a vision of the sort of future the Biden administration wants for Americans, expect Americans to demur.

Some might be tempted to dismiss Stephens’ column because he is considered the token conservative at the New York Times.

But Ezra Klein also acknowledges that California has a problem, and nobody will accuse him of being on the right side of the spectrum.

Here’s some of what he wrote in his column earlier this month for the New York Times.

I love California. I was born and raised in Orange County. I was educated in the state’s public schools and graduated from the University of California system… But for that very reason, our failures of governance worry me. California has the highest poverty rate in the nation, when you factor in housing costs, and vies for the top spot in income inequality, too. …but there’s a reason 130,000 more people leave than enter each year. California is dominated by Democrats, but many of the people Democrats claim to care about most can’t afford to live there. …California, as the biggest state in the nation, and one where Democrats hold total control of the government, carries a special burden. If progressivism cannot work here, why should the country believe it can work anywhere else?

Kudos to Klein for admitting problems on his side (just like I praise the few GOPers who criticized Trump’s big-government policies).

But his column definitely had some quirky parts, such as when he wrote that, “There are bright spots in recent years…a deeply progressive plan to tax the wealthy.”

That’s actually a big reason for the state’s decline, not a “bright spot.”

I’m not the only one to recognize the limitations of his column.

Who but Ezra Klein could survey the wreck left-wing Democrats have made of California and conclude that the state’s problem is its excessive conservatism? …Klein the rhetorician anticipates objections on this front and writes that he is not speaking of “the political conservatism that privatizes Medicare, but the temperamental conservatism that” — see if this formulation sounds at all familiar — “stands athwart change and yells ‘Stop!’” …California progressives have progressive policies and progressive power, and they like it that way. That is the substance of their conservatism. …Klein and others of his ilk like to present themselves as dispassionate pragmatists, enlightened empiricists who only want to do “what works.” …Klein mocks San Francisco for renaming schools (Begone, Abraham Lincoln!) while it has no plan to reopen them, but he cannot quite see that these are two aspects of a single phenomenon. …Klein…must eventually understand that the troubles he identifies in California are baked into the progressive cake. …That has real-world consequences, currently on display in California to such a spectacular degree that even Ezra Klein is able dimly to perceive them. Maybe he’ll learn something.

I especially appreciate this passage since it excoriates rich leftists for putting teacher unions ahead of disadvantaged children.

Intentions do not matter very much, and mere stated intentions matter even less. Klein is blind to that, which is why he is able to write, as though there were something unusual on display: “For all the city’s vaunted progressivism, [San Francisco] has some of the highest private school enrollment numbers in the country.” Rich progressives have always been in favor of school choice and private schools — for themselves. They only oppose choice for poor people, whose interests must for political reasons be subordinated to those of the public-sector unions from which Democrats in cities such as San Francisco derive their power.

Let’s conclude with some levity.

Here’s a meme that contemplates whether California emigrants bring bad voting habits with them.

Though that’s apparently more of a problem in Colorado rather than in Texas.

And here’s some clever humor from Genesius Times.