The Key To Switzerland's Success 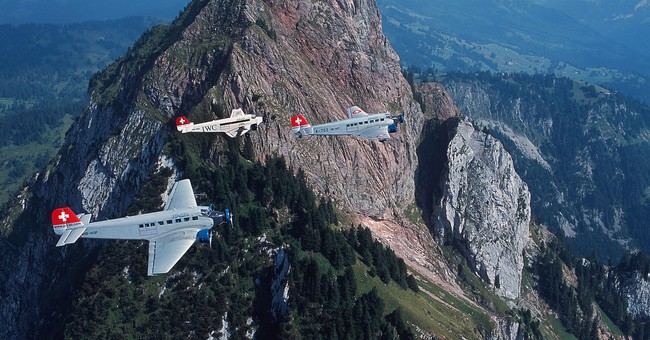 For a land-locked nation without many natural resources, Switzerland is remarkably successful.

One reason for the country’s success is pro-market policy. Switzerland routinely scores in the top 5 according to both Economic Freedom of the World and Index of Economic Freedom.

More specifically, I’m a big fan of the country’s fiscal policy, especially the “Debt Brake,” which was imposed when voters overwhelmingly adopted the provision (84.7 percent approval) early this century.

There’s always been a debate, however, whether Switzerland’s good outcomes are because of the debt brake, or because of some random reason, such as the sensibility of Swiss voters.

Three academic economists, Michele Salvi, Christoph Schaltegger, and Lukas Schmid, investigated this issue in a study for Kyklos, a scholarly journal published by the University of Basel.

A prominent means to prevent excess debt accumulation is the use of fiscal rules. In fact,fiscal rules focus on securing solvency of governments by concentrating on the intertemporal budget constraint. …there is a strong positive association between constrained fiscal discretion and improved fiscal performance. …Our paper presents evidence on the effect of a fiscal rule with a strict enforcement mechanism… We analyze the consequences of the centrally imposed balanced budget rule on public debt in Switzerland. …the Swiss debt containment rule stands out as a clearly defined fiscal rule with a constitutional basis that constrains deviating from a balanced budget in the long-term. …The rule consists of a simple mechanism stating that expenditure may not exceed revenues over the course of an economic cycle. …The debt containment rule brings a“top-down”element into the budgeting process, which has a strong disciplinary appeal and leads to more accurate budgeting. …one key aspect is the fact that the debt containment rule sets a clear expenditure ceiling.

The key parts from the above excerpt are “expenditure may not exceed” and “clear expenditure ceiling.”

Those statements ratify my oft-made point that the debt brake is really a spending cap. And spending caps are far and away the only effective macro-fiscal rule.

The policy certainly has generated good results for Switzerland. Here’s what the authors found when thy crunched numbers to compare the country’s current fiscal trajectory with what would have happened without a spending cap.

To construct the counterfactual outcome of the debt ratio for Switzerland without a debt containment rule, we select a control group…countries expected to be driven by a similar structural process as Switzerland. …Due to the availability of comprehensive debt data, the observation period is restricted to last from 1980 until 2010. …we divide the time period into a pre-treatment period from 1980 to 2002 and a postintervention period from 2003 to 2010. …Figure 2 displays the central government debt ratio for Switzerland and its synthetic counterpart during the study period. …In 2003, the two debt ratio curves start to diverge. …it appears that the introduction of the debt containment rule led to a substantial and persistent decrease in the debt ratio in Switzerland.

And here’s the relevant set of charts from the study.

Here’s one more sentence I want to cite since it echoes the argument I’ve made to my Keynesian friends about how they also should support a Swiss-style spending cap.

The debt containment rule has made a significant contribution to switching from a procyclical to a cyclically appropriate fiscal policy.

Simply stated, the political tradeoff embedded in the debt brake is that politicians get to modestly increase spending during a downturn, even though revenues are falling, but they also can only enact modest spending increases during growth years, even if revenue is growing much faster.

By the way, you will have noticed that the study focused on how the debt brake helped to reduce red ink.

Regular readers know that I’m far more interested in focusing on the real fiscal problem, which is excessive government spending.

So I’ll close by looking at some additional evidence from Switzerland. Here’s a chart, based on IMF data, showing that the growth rate of spending fell sharply after the debt brake was adopted.

I looked at the 2003-2010 period, since it matched the years in the study discussed above.

But I also calculated the spending growth rate for 2003-2019 and confirmed that the debt brake’s success hasn’t just been a temporary phenomenon.