A Great Day In History: The End Of The Soviet Union 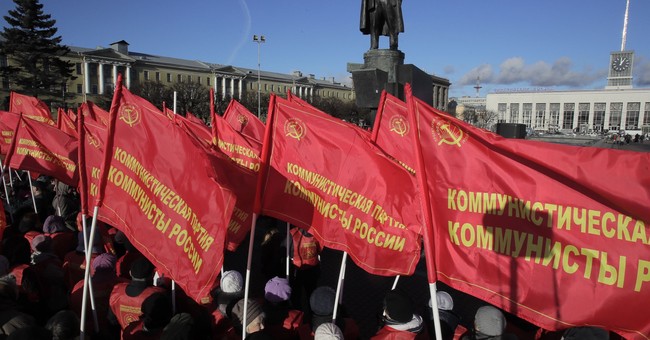 Wednesday, most of us celebrated Christmas.

Now, all of us should celebrate the dissolution of the Soviet Union, which officially happened this week in 1991 (aided and abetted by a Texas grocery store).

A 2016 FEE column by Richard Ebeling documents the relentless evil of Soviet communism.

…the curtain was lowered on the 75-year experiment in “building socialism” in the country where it all began following the Bolshevik Revolution in Russia, led by Vladimir Lenin in November 1917. Some historians have estimated that as many as 200 million people worldwide may have died as part of the 20th century dream of creating a collectivist “paradise on earth.” The attempt to establish a comprehensive socialist system in many parts of the world over the last 100 years has been one of the cruelest and most brutal episodes in human history. …as many as 68 million innocent, unarmed men, women, and children may have been killed in Soviet Russia alone over those nearly 75 years of communist rule in the Soviet Union. …This murderous madness never ended. In the 1930s, during the time of the Great Purges instituted by Soviet dictator Josef Stalin to wipe out all “enemies of the revolution” through mass executions, millions were sent to the Gulag prisons that stretched across all of the Soviet Union to be worked to death as slave labor to “build socialism.” …Soviet central planning even had quotas for the number of such enemies of the people to be killed in each region of the Soviet Union, as well as the required numbers to be rounded up to be sent to work in the labor camps in the frigid wastelands of the Siberia and the Arctic Circle… The nightmare of the socialist experiment, however, did not end with Stalin’s death in 1953. Its form merely changed in later decades. As head of the KGB in the 1970s, Yuri Andropov (who later was General Secretary of the Communist Party of the Soviet Union after Leonid Brezhnev’s death in 1982), accepted a new theory in Soviet psychiatry which said opposition to the socialist regime was a sign of mental illness.

Based on the sheer number of victims, Stalin understandably has the worst reputation of all Soviet dictators.

But let’s not forget that Lenin was a horrible human being as well.

Lenin’s streak of cruelty began long before he came to power. By his early 20s, his zealous dedication to Marxism led him to believe that anything justified revolution. When a famine broke out in the Volga region in 1891—one that would kill 400,000 people—Lenin welcomed the event, hoping that it would topple the Czarist regime. …Later, in 1905, when Czarist forces killed hundreds of striking workers and 86 children in Moscow, Lenin refused to mourn for the dead and, instead, hoped the event would further enflame class antagonisms. In his eyes, human lives were expendable… While in exile, Lenin railed against the imperial government for its oppressive ways—for instance, its censorship of the opposition and dismissal of parliament. Of course, once in power, Lenin repeated these policies and usually exceeded their cruelty, imprisoning and confiscating the property of his opponents. …Lenin appointed the homicidal Felix Dzerzhinsky to head up the Cheka (the secret police)… In less than a year, hundreds, if not thousands, were executed… He marked wealthy peasants, or kulaks, as enemies of the revolution and encouraged violence against them. He imposed fixed grain prices at low rates, straining peasants who already were living on the margins, seized their grain, and left them to starve. When the peasants began resisting, Lenin ordered government officials to torture them or apply poison gas.

By the way, it’s not directly relevant to the dissolution of the Soviet Union, but I can’t resist sharing this story from the BBC.

Karl Marx’s Grade I-listed memorial in Highgate Cemetery has been “mindlessly vandalised”. The marble plaque on the imposing sculpture’s base has been attacked, seemingly with a hammer. A cemetery spokesman said they did not know when it had happened, but believed it was within the last couple of days. No witnesses have come forward. …Ian Dungavell, chief executive of Friends of Highgate Cemetery Trust, said: “This is mindless vandalism, not political commentary. …This is not the first time the monument has been damaged. In 1970 a pipe bomb blew up part of the face, swastikas have been painted on it and emulsion paint has been thrown at it.

My only comment it that the memorial wasn’t “mindlessly vandalised.” There were 100 million reasons why it was defaced.

Now let’s look at the economic performance of the Soviet Union.

I’ll start with the simple and near-tautological observation that there’s no longer a Soviet Union in large part because its economy became so anemic.

Yet some people believed that the Soviet Union’s version of socialism could be economically successful. I wrote about their naivete as part of my collection of essays on the 100th anniversary of the Bolshevik revolution.

I suppose we can partially forgive them because much of the economic misery in the Soviet Union was hidden from outsiders.

What’s less forgivable is that some people still make absurd claims about the Soviet economy. Consider this screenshot of the first paragraph of the Wikipedia entry on the economy of the Soviet Union. I’ve highlighted in red the parts that are laughable.

Though, to be fair, there wasn’t a problem with unemployment and job security in the Soviet Union. Just like slaves in Alabama in 1830, Soviet workers were victims of state coercion. They were forced to show up at the collective farms and state-run industries.

And state coercion was the basis of a failed system. Contrary to whoever authored that Wikipedia entry, the Soviet Union did not enjoy high growth rates.

Soviet growth from 1960 to 1989 was the worst in the world after we control for investment and human capital; the relative performance worsens over time. …The declining Soviet growth rate from 1950 to 1987 can be accounted for by a declining marginal product of capital with a constant rate of growth of total factor productivity. The Soviet reliance on extensive growth (rising capital-to-out-put ratios) was no greater than that of market economies, such as Japan and the Republic of Korea, but a low elasticity of substitution between capital and labor implied especially acute diminishing returns to capital compared with the case in market economies.

“Worst in the world” is quite an achievement.

Not that any sentient being should be surprised. Politicians are bureaucrats don’t do a good job of allocating labor and capital.

If you want prosperity, it’s not a good idea to have central planning and other features of socialism.

Here’s a fascinating look at the world’s largest economies (by overall size, not on a per-capita basis) from 1961-1989.

How the Soviet Union lost the race with the US: a brilliant infographic on Soviet attempt and failure to catch up with America

Here’s a chart based on the Maddison database, so we can make comparisons based on per-capita economic output.

As you can see, even though convergence theory says poor countries should grow faster than rich countries, the gap between the United States and the Soviet Union grew ever larger.

Last but not least, here’s a chart that compares the Soviet Union’s claims about growth (blue) with both CIA estimates (red) and later revisions from a Russian economist (green).

There are two lessons to be learned.

That latter point may be relevant for people who think China is an economic powerhouse.

P.S. The Soviet Union is gone, but most of the countries that emerged from the wreckage are still struggling with a legacy of statism and intervention.

P.P.S. In addition to celebrating this day, we also should celebrate November 9.