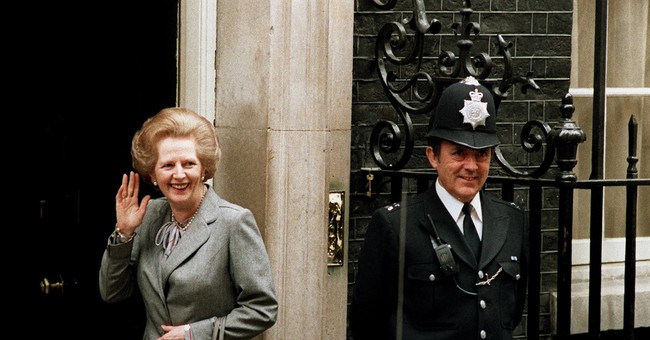 For two simple reasons, I want Boris Johnson to win a clear majority tomorrow in the elections for the British Parliament.

Beyond that, his platform is not terribly exciting for supporters of limited government.

I’ve previously shared two great videos of Thatcher, one about the real source of government funds and the other about the poisonous ideology of class warfare.

Or making this statement.

Or giving these remarks.

As far as I know, Boris Johnson isn’t hostile to free markets and limited government.

He just doesn’t seem animated by a desire to shrink the public sector.

Thatcher, by contrast, was so sound on such issues that “Thatcherism” is now a term to describe good economic policy.

Forty years on, Margaret Thatcher’s election as Great Britain’s first female prime minister still looks miraculous. …Right after World War II, Labour prime minister Clement Attlee, overly optimistic about the capacity of government to do great things, laid the foundations of the British welfare state. …The postwar economic consensus was so robust that it became known as Butskellism, since the policies of Rab Butler, the Conservative chancellor of the Exchequer from 1951 to 1955, and his Labour predecessor Hugh Gaitskell were indistinguishable. The glory days of interventionism didn’t last, however. By 1979, a third of the British workforce was employed by government, directly or indirectly, yet unemployment continued to rise throughout the 1970s. Inflation rose to double digits, exceeding 25 percent… Thatcher recognized the economic crisis as a failure of politics. She offered a gospel of government retrenchment and individual initiative that sounded outdated. She wanted to make people responsible again for their economic destinies, instead of entrusting their fates to state guidance. This meant denationalizing the British economy. Before Thatcher took office, “privatization” was a word out of science fiction; ten years after she left office, it was a global norm. She changed England and, by changing England, changed the world. …Thatcher aimed to stimulate self-reliance and independence, and she saw these virtues threatened by the culture of passivity that statism engenders. …the British political establishment always looked down on this shopkeeper’s daughter. And yet Thatcher’s defining quality, and the reason why we still speak of Thatcherism, is that she told people things that they didn’t want to hear.

And here are some excerpts about Thatcherism from a column by Roger Bootle for the U.K.-based Telegraph.

No previous British Prime Minister has had an ism named after them. …and if such an ism had been conjured up, it would surely not have been about economics. …“Thatcherism” was both substantial and essentially about political economy. …The main high intellectual influences, coming via Keith Joseph, were from Friedrich von Hayek and Milton Friedman. …Baroness Thatcher was ideological by nature. …When she first burst onto the stage it was a time for isms. Domestically, the 1970s had been a period of crisis. At various points, not just the economy but the whole system of democratic government in Britain seemed at the point of collapse. …Baroness Thatcher would have seen her ideological enemy then as “socialism”, which had brought the country low: excessive levels of government spending and taxation, lax financial discipline… Much of it was just the traditional liberal economic agenda, developed in the 19th century – free markets, free trade, competition, a small state, requiring only low levels of taxation, and financial probity. …Saying that this was just a retread of old 19th century liberalism doesn’t convey how radical these ideas were at the time, after decades in which markets were held under suspicion and even in a supposedly capitalist country like the UK, the state’s role in the economy was overwhelming. …there was more to Thatcherism than simply the liberal agenda. Classical liberalism was fleshed out with some more homespun beliefs – in value for money, efficiency, self-reliance, saving and wealth accumulation.

Speaking of which, I finally found some video of Margaret Thatcher’s famous line about socialists running out of other people’s money.

Shifting topics, nobody knows with total confidence whether Thatcher would have supported Brexit.

She was sympathetic to the original concept of Europe as a free-trade zone.

But as the free-trade pact began morphing into a pro-centralization supra-national government, she became increasingly hostile.

This video captures some of that skepticism.

For what it’s worth, I’m confident she would have been on the right side and supported Brexit.

We’ll start with the United Kingdom’s score from Economic Freedom of the World.

As you can see, there was a dramatic increase in economic liberty during the Thatcher years.

The scores from EFW, which only exist in every fifth year, don’t exactly coincide with Thatcher’s tenure, but the trend is unmistakable.

Conversations with British experts lead me to state that she had three amazing accomplishments.

Her only notable bad policy is that she increased the value-added tax.

I also give Thatcher credit for a better-than-expected record on spending restraint (the same is true for David Cameron), and I also think she deserves praise from helping to bring inflation under control.

To be sure, this simplified assessment only skims the surface. And it doesn’t address “sins of omission,” such as her inability to pare back the the country’s creaky government-run health care system (though she did some incremental reforms, such as internal markets).

Nonetheless, the bottom line is that Thatcher was an amazingly successful Prime Minister. For all intents and purposes, she saved the United Kingdom.

P.S. If you want to see my assessments of American presidents, I’ve looked at Reagan, Clinton, Hoover, Nixon, the second Bush, and Obama.