The Real Story About Teacher Pay 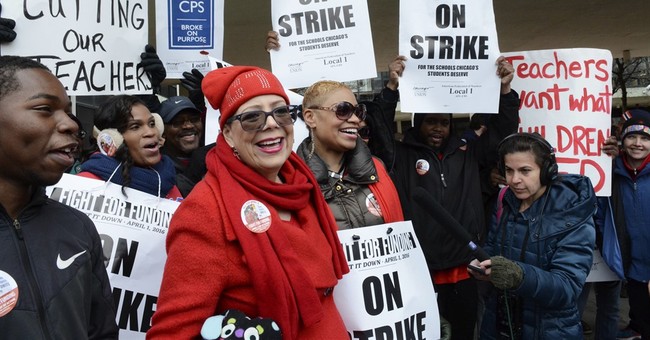 The worst policy research I’ve ever seen, over nearly four decades in the field, is the OECD’s grotesquely dishonest data on poverty (it even motivated a special page to acknowledge “poverty hucksters”).

But this video from Andrew Biggs suggests that the Economic Policy Institute could give the OECD some real competition.

This video exposing the EPI’s laughable methodology is a perfect introduction to the issue of teacher compensation, which is Part IV of our series to acknowledge National Education Week.

For a closer look at the issue, here are some excerpts from a column published by City Journal that Biggs co-authored with Jason Richwine.

Most commentary on teacher pay begins and ends with the observation that public school teachers earn lower salaries than the average college graduate. This is true, but in what other context do we assume that every occupation requiring a college degree should get paid the same? Engineers make about 25 percent more than accountants, but “underpaid” accountants are not demonstrating in the streets. …About half of teachers major in education, among the least-rigorous fields at both the undergraduate and graduate levels. Incoming education majors have lower SAT or GRE scores than candidates in other fields, but—thanks to grade inflation—they enjoy the highest GPAs. …At the lowest skill levels—a GS-6 on the federal scale—teachers earn salaries about 26 percent higher than similar white-collar workers. At GS-11, the highest skill level, teaching pays 17 percent less than other white-collar jobs. This explains how shortages can exist for specialized positions teaching STEM, languages, or students with disabilities, while elementary education postings may receive dozens of applications per job opening. …Teachers enjoy widespread public favor, and their desire for higher pay is understandable. But no nationwide crisis of teacher compensation exists. Most teachers receive market-level salaries and generous retirement benefits.

They also addressed the topic in a piece for the Wall Street Journal.

…the annual reports on public-school teacher pay produced by the Economic Policy Institute…claims the nation’s public-school teachers were underpaid by a record 21.4% in 2018… To measure the teacher pay gap, EPI researchers compare teacher salaries with the salaries of people who have the same number of years of education and the same demographic characteristics. This model assumes that education is interchangeable—that a bachelor’s degree in education has the same market value as a bachelor’s in engineering, and a master’s in education is worth the same as a master’s in business administration. …If you accept the Economic Policy Institute’s findings, ludicrous conclusions follow. …We could complain that aerospace engineers are overpaid by 38%, and we could demand justice for telemarketers who are shortchanged by 26%. …If public-school teachers were truly underpaid, we might expect teachers to reap much higher salaries when they switch to nonteaching jobs. They don’t. We also might expect to see public-school teachers paid less than those in private schools. In fact, public-school teacher salaries are roughly 16% higher than in nonreligious private schools.

Let’s take a look at what’s happening in some major cities.

The L.A. Times reports on how record levels of spending are enriching teacher compensation rather than boosting student outcomes.

Gov. Gavin Newsom’s latest budget plan projects $101.8 billion in total spending — which includes both local and statewide operations — for K-12 schools. That’s a $4.6-billion boost from last summer’s enacted budget and an astounding $35-billion increase from what lawmakers approved in 2014. …But at the same time, a few important things have complicated the flow of dollars to the classroom. …School districts are being squeezed…by the rising costs of employee healthcare and pensions. …“When you look at the dollars that reach the actual schools, the increase in overall funding is being outstripped by the increase in mandated costs,” Gordon said. …And while measurements differ, there’s a consensus that California trails almost every other state in per-pupil funding.

Likewise, a column in the N.Y. Post reveals that record levels of spending in New York are driven by teacher compensation, yet kids are under-performing.

The city shelled out a whopping $25,199 per pupil during fiscal 2017, compared to just $12,201 nationwide, according to data from the US Census Bureau. The record amount tops a list of per-pupil spending by the country’s 100 biggest school systems, and exceeds second-place Boston’s $22,292 by 13 percent. But recent state test results indicate that Big Apple taxpayers aren’t getting much of a bang for their bucks, with less than half of the kids in public schools exhibiting a fundamental grasp of English and math skills. …An Empire Center analysis of the latest Census numbers also showed that New York’s educational expenditures are primarily driven by teacher salaries and benefits that are 117 percent above the national average on a per-student basis. “Indeed, New York’s spending in this category alone exceeded the total per-pupil spending of all but six other states,” Empire Center founder E.J. McMahon wrote in a blog post.

The obvious conclusion is that taxpayers are over-compensating teachers, especially when looking at student performance.

But what’s far more important is to look at the deeply flawed system for determining teacher compensation.

Yes, there’s excessive pay and benefits in the contracts concocted by union bosses and politicians, but the bigger problem is that there’s no mechanism to reward good teachers and penalize bad teachers.

Indeed, many of the contracts are specifically designed to ensure that bad teachers can’t be dismissed.

Let’s look at some passages from a Wall Street Journal column by Cami Anderson, a former school administrator in both Newark and New York.

…disheartening lessons I learned regarding teacher’s contracts and labor laws during the five years I served as superintendent of New York City’s Alternative High Schools and Programs…my team and I were charged with improving the lives and academic outcomes of some of our city’s most at-risk young people. About 30,000 students ages 16 to 21, most from low-income families of color… Not long into my term, however, the ugly reality of the dysfunctional systems working against our students hit me. …many teachers and staff reinforced our students’ deepest self-doubts. …Annual performance evaluations are supposed to ensure ongoing quality among tenured teachers, but all too often the system fails. In New York 99% of teachers receive “effective” ratings while fewer than 40% of high-schoolers graduate college-ready. …Even worse, teachers engaging in egregious conduct, like showing up late 40 times in a single year, physically assaulting a child, or falsifying records (actual examples), incurred no consequences… As a huge believer in unions, due process and collective bargaining, I agonized seeing union staff zealously defend a tenure system that essentially traded students’ futures for jobs at all costs. …Meanwhile, our district employed nearly a dozen “principals” and “vice principals”… Lawyers had negotiated settlements to place them “off the radar” rather than attempt to navigate the byzantine tenure-revocation process. …People were quick to tell me there was nothing I could do about it because of labor laws and practices—and that asking questions made you a target.

And here’s some very sobering information from a column in City Journal.

…mayors, governors, and presidents should retain broad powers to remove incompetent, unsavory, or negligent government workers. In this context, the very notion of public-employee unions is contradictory, as Franklin Roosevelt recognized… Consider teachers’ unions. Citing a study by Stanford University researcher Eric Hanushek, Howard notes that bad teachers have a much greater negative effect on student performance than good teachers have a positive effect. Based on student-performance data, Hanushek’s study concluded that dismissing the worst 8 percent of American public school teachers would put American students on par with those of Finland, which has the highest-scoring students in the world. Yet it’s nearly impossible to fire tenured teachers.

American kids do not get good scores compared to kids in other nations, so the notion that we could close the gap by getting rid of the worst teachers is very encouraging.

But that’s effectively impossible because unions are more concerned with protecting the worst teachers than they are with producing the best outcomes.

Since we started with a video from Andrew Biggs, let’s close with his infographic.

The bottom line is that the government’s school monopoly is doing a bad job in large part because it’s being run for the benefit of teachers unions.

With school choice, by contrast, it would be possible to reward the best teachers. Indeed, there would be competitive pressure for that outcome under a decentralized, competition-based system.