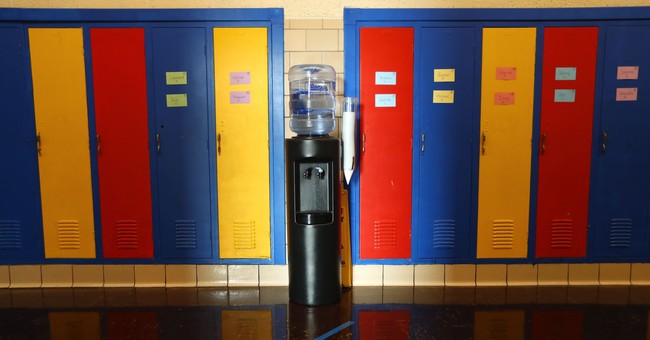 I care about facts and I care about kids, and all the evidence shows that government schools do a terrible job. So, instead of celebrating, I’m going to focus this week on government’s destructive impact.

Let’s start with this stunning visual from Mark Perry at the American Enterprise Institute. As you can see, the main takeaways are that costs have soared and bureaucracy has expanded.

And if you look at this chart, you’ll see that test scores have been flat.

Indeed, the unambiguous conclusion is that taxpayers are being asked to cough up ever-growing amounts of cash. Yet we never see any improvements in the quality of government schooling.

Indeed, an article in National Review explains that all this money and this bureaucracy has produced a negative rate of return

A Nation at Risk…revealed, in the words of Ronald Reagan, an education system plagued by “low standards, lack of purpose, ineffective use of resources, and a failure to challenge students to push performance to the boundaries of individual ability.” …Since then the nation has devoted a great deal of attention to getting education right. To little avail. …The results of the 2017 National Assessment of Educational Progress (NAEP)…, released this month, are dismal. Fewer than half of students are rated “proficient” in each of these subjects.

But it’s not just folks on the right who think the current system is a failure.

An article in left-of-center Vox is even more dour about the effectiveness of government schools.

…cast a cold look at the performance of schools… Consider the trends: Since 2005, SAT reading scores have dropped by 14 points. A writing component was added to the SAT in 2006, and scores have dropped every year since then except for two years when they were flat. Math scores for 2015 were the lowest in 20 years. …On the ACT’s measure of “college readiness” in math, English, reading, and science, slightly more than one-third of test takers met the benchmarks in three subjects, while another one-third did not meet any(!) of the benchmarks. …According to the National Assessment of Educational Progress exams (the “Nation’s Report Card,” administered by the Education Department’s National Center for Educational Statistics), only one-quarter of 12th-graders are proficient in civics, one-fifth in geography, just over one-third (37 percent) in reading, one-fifth (22 percent) in science, and one-eighth (12 percent) in US history. Only one-quarter of them reach proficiency in math. …At the same time, we have another discrepancy, outcomes versus public school funding. …Adjusted for inflation, the national average for per-pupil spending rose steadily…the cost-benefit numbers continue to look bleak.

The fundamental problem is that teacher unions are in bed with politicians.

This doesn’t just mean that government schools are needlessly expensive (and they are). It also means that the government monopoly primarily exists as a tool to serve bureaucracy rather than students.

Does collective bargaining by teachers help or hurt students?Two Cornell academics— Michael Lovenheim, an associate professor of policy analysis and management, and Alexander Willén, a doctoral student—have recently completed a study that tries to answer it. In “A Bad Bargain: How teacher collective bargaining affects students’ employment and earnings later in life,” the professors conclude: “We find strong evidence that teacher collective bargaining has a negative effect on students’ earnings as adults.” …Students who spent all 12 years of their elementary and secondary education in schools with mandatory collective bargain earned $795 less per year as adults than their peers who weren’t in such schools. They also worked on average a half hour less per week, were 0.9% less likely to be employed, and were in occupations requiring lower skills. The authors found that these add up to a large overall loss of $196 billion per year…collective bargaining may be profitable for the teachers and staff of public schools, but the price is being paid by the students.

Indeed, this article from the Federalist documents the failure of Obama’s approach.

…the Obama administration lured states into adopting Common Core sight unseen, with promises it would improve student achievement. Like President Obama’s other big promises — “If you like your doctor, you can keep your doctor” — this one’s been proven a scam. …Race to the Top was a $4 billion money pot inside the 2009 stimulus that helped bribe states into Common Core. …Are American children increasingly prepared…? We’re actually seeing the opposite. They’re increasingly less prepared. And there’s mounting evidence that Common Core deserves some of the blame. …ACT scores released earlier this month show that students’ math achievement is at a 20-year low. The latest English ACT scores are slightly down since 2007, and students’ readiness for college-level English was at its lowest level since ACT’s creators began measuring that item…the latest round of international tests…showed U.S. fourth graders declining on reading achievement. …Common Core sucked all the energy, money, and motivation right out of desperately needed potential reforms to U.S. public schools for a decade, and for nothing. It’s more money right down our nation’s gigantic debt hole, another generation lost to sickening ignorance, another set of corrupt bureaucrats‘ careers and bank accounts built out of the wreckage of American minds.

We can also see the dismal impact of bigger budgets by looking at experiences in various cities.

Mayor Bill de Blasio is canceling one of his signature education initiatives, acknowledging that despite spending $773 million he was unable to turn around many long-struggling public schools in three years after decades of previous interventions had also failed. …the program has been plagued by bureaucratic confusion and uneven academic results… The question of how to fix broken schools is a great unknown in education…no large school system has cracked the code, despite decades of often costly attempts. …the program was based on the union-friendly theory that struggling schools need more resources.

It didn’t work in Newark.

Booker pitched Facebook founder Mark Zuckerberg that, with $100 million, they “could flip a whole city!” In September 2010, the troika appeared on Oprah Winfrey’s television show to present and accept the gift. For education reformers convinced that poverty could be solved given the will and the money, it was a dream come true. …the reformers’ dreams turned into a political nightmare. …Hopes for a game-changing teacher contract were quickly dashed, as reformers learned that teacher tenure protections were enshrined in state law. …Newark public schools spend $19,650 per pupil, but only $9,604 reaches the classroom.

And it didn’t work in Denver.

Denver’s once-celebrated ProComp pay system…was jointly developed by the DCTA and Denver Public Schools in 2005. …Back then, ProComp was heralded as a pioneering step forward on pay-for-performance/merit pay… The only problem? This narrative is bunk. For all the talk about “merit” and “performance,” ProComp is almost wholly devoid of any links between pay and teacher performance. …ProComp is mostly designed to reward the usual credentialism… Denver’s situation is so noteworthy because Denver is no laggard. Indeed, for many years, it has been celebrated as a “model” district by reformers. So it’s disheartening how little progress the city has actually made.

And you won’t be surprised to learn it didn’t work in D.C.

The much-celebrated success of education reform in the nation’s capital turns out to have been a lie. …Education reformers used to celebrate D.C.’s dramatic decline in school suspensions. Then a Washington Post investigation revealed that it was fake; administrators had merely taken suspensions off the books. The same reformers used to celebrate D.C.’s sharp increase in high-school graduations. Then an NPR investigation revealed that it, too, was fake; almost half of students who missed more than half the year graduated. …consider Abdullah Zaki, who back in 2013 was named DCPS principal of the year. He was just placed on administrative leave (not fired, mind you) after an audit revealed that 4,000 changes were made to 118 students’ attendance records at his high school. …consider Yetunde Reeves…who took Ballou High School from 57 percent graduation to 100 percent college acceptance in just one year. She was placed on administrative leave (again, not fired) after NPR reported teacher allegations that she leveraged the teacher-evaluation system to coerce teachers to go along with her scheme.

I realize I’m being repetitive, but more money for the government monopoly also didn’t work in Providence.

Rhode Island’s politicians this summer made a show of decrying the shameful condition of Providence public schools…peeling lead paint, vermin, brown water, leaking sewage—from a Johns Hopkins Institute for Education Policy 93-page report on Providence schools… Student test scores are the worst in Rhode Island and lower than districts in other states with similar demographics. …“the district’s performance is continuing to decline despite increased interventions and funding.” Providence’s school budget has increased by nearly a quarter since 2011.

You can also click here to read about failure in Patterson, N.J., and Los Angeles, CA. The bottom line is that more spending does not lead to better student performance.

California’s Education Department has issued an “Ethnic Studies Model Curriculum”…written by an advisory board of teachers, academics and bureaucrats. It’s as bad as you imagine. …The document is filled with fashionable academic jargon like “positionalities,” “hybridities,” “nepantlas” and “misogynoir.” It includes faddish social-science lingo like “cis-heteropatriarchy”… It is difficult to comprehend the depth and breadth of the ideological bias and misrepresentations without reading the whole curriculum—something few will want to do. Begin with economics. Capitalism is described as a “form of power and oppression,” alongside “patriarchy,” “racism,” “white supremacy” and “ableism.” …Housing policy gets the treatment. The curriculum describes subprime loans as an attack on home buyers with low incomes rather than a misguided attempt by the government to help such home buyers. …This curriculum explicitly aims at encouraging students to become “agents of change, social justice organizers and advocates.”

Seattle is also looking to get in the business of dishing out propaganda.

Seattle’s public-school district has proposed a new math curriculum that would teach its students all about how math has been “appropriated” — and how it “continues to be used to oppress and marginalize people and communities.” …the social-justice approach to teaching math has officially entered the mainstream (and taxpayer-funded!) arena. …this approach to teaching math will only end up harming the very groups it claims it champions. …The minority students, the members of the very groups that this curriculum presumably aims to aid, are actually going to be learning less math than they would have without it — because they will be spending some of that class time learning about how math’s racism has hurt them.

To round out our discussion, here’s a video from Reason.

So what’s the solution?

Writing for Real Clear Politics, Heather Wilhelm says we need to give up on the government monopoly.

…there might not be much left to do but vote with your feet. The term “Go Galt,” which comes from Ayn Rand’s “Atlas Shrugged,” refers to citizens retreating from a political system that basically takes their money and otherwise does them no good. …odds are the public school system isn’t doing you any favors. If you’re a poor kid in the inner city, the damage and injustice is obvious… “If you send your kid to a private school,” Slate’s Allison Benedikt wrote in a 2013 essay-gone-viral, you are “a bad person … ruining one of our nation’s most essential institutions.” News flash: The public school system is already a mess, it’s getting messier, and it can only improve the old-fashioned way — through competition.

If you prefer, this quote from Thomas Sowell is spot on.

If you are serious about wanting to improve education, do not vote more money for the education establishment that has been dumbing down the schools for years. Vote for vouchers, tax credits, or anything else that will transfer decision-making power to parents.

It goes without saying that shutting down the Department of Education would be a positive step. But that’s only a partial solution. We’ll explore the real answer tomorrow.