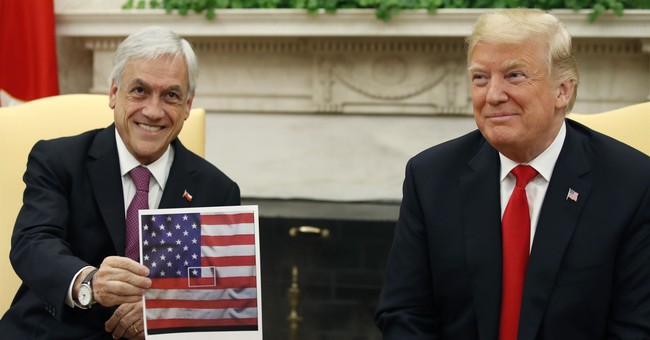 The paper’s editorial asserted that only the rich have gained, a view that is utterly nonsensical and inaccurate.

Indeed, I visited Chile about a year ago and finished a three-part series (here, here, and here) showing how the less fortunate have been the biggest winners.

But numbers and facts are no match for ideology at the NYT.

We now have a new story, written by Amanda Taub, asserting that free markets have failed in Chile.

For three weeks, Chile has been in upheaval. …Perhaps the only people not shocked are Chileans. …The promise that political leaders…have made for decades — that free markets would lead to prosperity, and prosperity would take care of other problems — has failed them. …Inequality is still deeply entrenched. Chile’s middle class is struggling… There is broad agreement, among protesters and experts alike, that the country needs structural reforms.

This view is echoed by a Chilean professor in a column for the U.K.’s left-leaning Guardian.

Inequality in Chile is scandalous and most middle-class Chileans live in precarity. …the country has a structural problem with a clear name: inequality. The per capita income of the bottom quintile of Chileans is less than $140 a month. Half the population earns about $550. …This crisis is, at heart, an urgent message to the Chilean elite: profound changes are needed to rebuild the social contract.

But if Chile is a failure, then other nations in Latin America must be in a far worse category.

Look at what’s happened to average incomes over the past three decades.

Speaking of which, here’s a powerful video comparing Chile and Venezuela.

So why is there discontent when Chile has been so successful?

In her Wall Street Journal column, Mary Anastasia O’Grady worries that the left controls the narrative in Chile.

…the hard left has spent years planting socialism in the Chilean psyche via secondary schools, universities, the media and politics. Even as the country has grown richer than any of its neighbors by defending private property, competition and the rule of law, Chileans marinate in anticapitalist propaganda. The millennials who poured into the streets to promote class warfare reflect that influence. The Chilean right has largely abandoned its obligation to engage in the battle of ideas in the public square. Mr. Piñera isn’t an economic liberal and makes no attempt to defend the morality of the market. He hasn’t even reversed the antigrowth policies of his predecessor, Socialist Michelle Bachelet. Chileans have one side of the story pounded into their heads. As living standards rise, so do expectations. When reality doesn’t keep up, the ground is already fertile for socialists to plow.

Incidentally, even the center-left Economist doesn’t agree with the argument that Chile is a failure.

In Chile, free-marketeers’ favourite economy in the region, protests against a rise in fares on the Santiago metro descended into rioting and then became a 1.2m-person march against inequality… Despite its flaws, Chile is a success story. Its income per person is the second-highest in Latin America and close to that of Portugal and Greece. Since the end of a brutal dictatorship in 1990 Chile’s poverty rate has dropped from 40% to less than 10%. Inflation is consistently low and public finances are well managed. …This is no argument for complacency in Chile. …Chileans still feel underserved by the state. They save for their own pensions, but many have not contributed long enough to provide for a tolerable retirement. Waiting times in the public health service are long. So people pay extra for care.

Sadly, the article then goes on to endorse bigger government and more redistribution – policies which would erode Chile’s competitiveness and prosperity.

Unfortunately, the President of Chile seems willing to embrace these bad policies.

In another column for the WSJ, Ms. O’Grady warns about the possible consequences.

The pain for Latin America’s most successful economy is only beginning. …Mr. Piñera…has opened the door to rewriting Chile’s Constitution to meet the demands of socialists, communists and others on the left. If Latin American history is any guide, a constitutional rewrite will strip away political and economic rights, concentrate power and leave the nation poorer and more unjust. The biggest losers would be the aspirational poor, who will be denied access to a better life in what has become one of the world’s most socially mobile economies. …Mr. Piñera has agreed to talks with the “citizens” whose interests are presumably represented by the firebombers and looters. …This is a stunning surrender and it is hardly surprising that it seems only to have whet the appetite of the radical left.

She points out that Chile’s market reforms have been hugely successful.

What isn’t debatable is the economic gains, across the board, that the market model has created. Less than 9% of the nation now lives below the poverty level. In a 2018 Organization for Economic Cooperation and Development report titled “A Broken Social Elevator? How to Promote Social Mobility,” Chile stands out for its social mobility. According to the data, 23% of sons whose fathers were in the bottom quartile of earners make it to the top quartile. By this measure, Chile had the highest social mobility among 16 OECD countries in the study. …inequality in Chile has been falling for 20 years. …That’s something for Mr. Piñera to think about before he helps the left destroy a model that works.

It would be a tragedy if politicians wrecked Latin America’s biggest success story.

Let’s close with some analysis in Harvard’s Latin America Policy Journal by Rodrigo Valdés, who was a finance minister under the previous center-left government.

What are the facts? Chile’s per capita GDP increased almost threefold between 1990 and 2015, with short-lived and shallow recessions in 1999 and 2009 only. More precisely, per capita GDP increased a cumulative 280 percent, or 5.3 percent per year (at PPP and constant dollars). At the same time, the distribution of income improved. …Remarkably, all but the top quintile (actually, all but the top decile) improved their share of total income after taxes and transfers. …For the middle 20 percent or “middle class,” growth explained more than 10 times what they gained through better income distribution. For the bottom 20 percent, the redistribution effort was more relevant, though growth was still dominant, explaining six times more than redistribution. Second, what Chile accomplished in the last 25 years is impressive. For the middle class, even a sudden transformation to the Nordics in terms of income distribution (without changes in aggregate GDP) produces less than one-tenth of what the combination of actual growth and better distribution produced for this segment. The bottom 20 percent gained in these two and half decades more than four times what they would achieve with a sudden Nordic distribution.

I suppose I should highlight the fact that a high-level official for a left-leaning government is pointing out that Chile’s reforms have been very successful.

But what really matters is the point he makes about how growth being far more important than redistribution – assuming the goal is to actually help low-income people live better lives.

The third column shows how much income has expanded for each segment of the population. And you can see (highlighted in red) that the bottom 10 percent has enjoyed more than twice the income gains as the top 10 percent.

But pay extra attention to the first and second columns. Economic growth far and away is the most important factor in boosting prosperity for the less fortunate.

Which shouldn’t be a surprise. I’ve shared lots of evidence (over and over and over again) showing that market-driven growth is the best way of helping low-income people.

Indeed, even the World Bank agrees the Chilean model is vastly superior to the Venezuelan approach.