This Organization Is Good News For American Taxpayers, Consumers, And Businesses 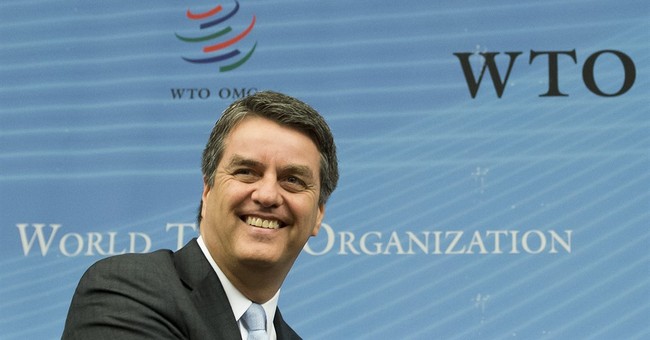 Earlier this year, I shared a short video about the benefits of the World Trade Organization.

Here’s a more substantive version (though still only four minutes).

I wanted to keep the video short, so I focused primarily on how the United States disproportionately benefits because other nations are pressured to reduce their trade taxes down to American levels.

Though I also pointed out that all countries benefit as global trade increases.

This is particularly relevant when you ponder President Trump’s trade spat with China. Yes, it would be good for the United States if China liberalized its economy and got rid of its mercantilist policies.

But it also would be good for China.

Since we’re discussing the WTO, let’s look at some scholarly evidence.

An article by three Stanford political scientists for International Organization finds that the WTO has been beneficial for global trade.

The General Agreement on Tariffs and Trade (GATT) and the World Trade Organization (WTO) have been touted as premier examples of international institutions, but few studies have offered empirical proof. This article comprehensively evaluates the effects of the GATT/WTO and other trade agreements since World War II. Our analysis is organized around two factors: institutional standing and institutional embeddedness. We show that many countries had rights and obligations, or institutional standing, in the GATT/WTO even though they were not formal members of the agreement. We also expand the analysis to include a range of other commercial agreements that were embedded with the GATT/WTO. Using data on dyadic trade since 1946, we demonstrate that the GATT/WTO substantially increased trade for countries with institutional standing, and that other embedded agreements had similarly positive effects. Moreover, our evidence suggests that international trade agreements have complemented, rather than undercut, each other.

Meanwhile, a French think tank looks at some of the evidence in favor of the WTO’s rules-based approach to reducing trade taxes.

…the World Trade Organisation (WTO) which held a dominant position after WWII with its multilateral rules has lost influence…. From the point of view of a consumer or producer, the higher volatility of trade policy is nothing positive. …Handely and Limao (2015), Handley (2014), Pelc (2013) as well as Bacchetta and Piermartini (2011) also find empirical support for welfare gains from a rules compliant trade policy. …After WWII the average level of tariffs decreased constantly and predictably as part of the General Agreement on Tariffs and Trade (GATT), and its successor the WTO, which are based on member commitment and reciprocity. …multilateral agreements such as the WTO offer mechanisms which provide incentives even for mercantilist politicians to reduce barriers of trade.

Here’s a chart from the study, which shows how trade taxes have been falling in the post-World War II era.

In other words, the WTO process has been successful. President Trump’s tactic of escalating tariffs, by contrast, has not worked.

By way of background, the WTO is actually nothing more than a dispute-resolution forum for the GATT system (General Agreement on Tariffs and Trade) that was created back in the late 1940s.

And, unlike the International Monetary Fund or Organization for Economic Cooperation and Development, this is a part of the “post-war order” that’s worth preserving.