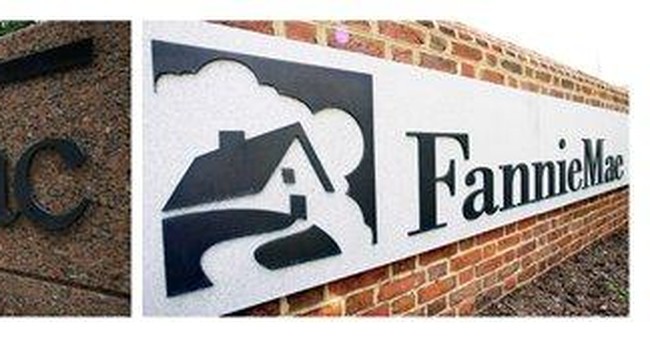 The 2008 financial crisis was largely the result of bad government policy, including subsidies for the housing sector from Fannie Mae and Freddie Mac.

This video is 10 years old, but it does a great job of explaining the damaging role of those two government-created entities.

The financial crisis led to many decisions in Washington, most notably “moral hazard” and the corrupt TARP bailout.

But the silver lining to that dark cloud is that Fannie and Freddie were placed in “conservatorship,” which basically has curtailed their actions over the past 10 years.

Indeed, some people even hoped that the Trump Administration would take advantage of their weakened status to unwind Fannie and Freddie and allow the free market to determine the future of housing finance.

Those hopes have been dashed.

Cronyists in the Treasury Department unveiled a plan earlier this year that will resuscitate Fannie and Freddie and recreate the bad incentives that led to the mess last decade.

This proposal may be even further to the left than proposals from the Obama Administration. And, as Peter Wallison and Edward Pinto of the American Enterprise Institute explained in the Wall Street Journal earlier this year, this won’t end well.

…the president’s Memorandum on Housing Finance Reform…is a major disappointment. It will keep taxpayers on the hook for more than $7 trillion in mortgage debt. And it is likely to induce another housing-market bust, for which President Trump will take the blame.The memo directs the Treasury to produce a government housing-finance system that roughly replicates what existed before 2008: government backing for the obligations of the government-sponsored enterprises Fannie Mae and Freddie Mac , and affordable-housing mandates requiring the GSEs to encourage and engage in risky mortgage lending. …Most of the U.S. economy is open to the innovation and competition of the private sector. Yet for no discernible reason, the housing market—one-sixth of the U.S. economy—is and has been controlled by the government to a far greater extent than in any other developed country. …The resulting policies produced a highly volatile U.S. housing market, subject to enormous booms and busts. Its culmination was the 2008 financial crisis, in which a massive housing-price boom—driven by the credit leverage associated with low down payments—led to millions of mortgage defaults when housing prices regressed to the long-term mean.

Wallison also authored an article that was published this past week by National Review.

He warns again that the Trump Administration is making a grave mistake by choosing government over free enterprise.

Treasury’s plan for releasing Fannie Mae and Freddie Mac from their conservatorships is missing only one thing: a good reason for doing it. The dangers the two companies will create for the U.S. economy will far outweigh whatever benefits Treasury sees. Under the plan, Fannie and Freddie will be fully recapitalized… The Treasury says the purpose of their recapitalization is to protect the taxpayers in the event that the two firms fail again. But that makes little sense. The taxpayers would not have to be protected if the companies were adequately capitalized and operated without government backing. Indeed, it should have been clear by now that government backing for private profit-seeking firms is a clear and present danger to the stability of the U.S. financial system. Government support enables companies to raise virtually unlimited debt while taking financial risks that the market would routinely deny to firms that operate without it. …their government support will allow them to earn significant profits in a different way — by taking on the risks of subprime and other high-cost mortgage loans. That business would make effective use of their government backing and — at least for a while — earn the profits that their shareholders will demand. …This is an open invitation to create another financial crisis. If we learned anything from the 2008 mortgage market collapse, it is that once a government-backed entity begins to accept mortgages with low down payments and high debt-to-income ratios, the entire market begins to shift in that direction. …why is the Treasury proposing this plan? There is no obvious need for a government-backed profit-making firm in today’s housing finance market. FHA could assume the important role of helping low- and moderate-income families buy their first home. …Why this hasn’t already happened in a conservative administration remains an enduring mystery.

I’ll conclude by sharing some academic research that debunks the notion that housing would suffer in the absence of Fannie and Freddie.

A working paper by two economists at the Federal Reserve finds that Fannie and Freddie have not increased homeownership.

The U.S. government guarantees a majority of mortgages, which is often justified as a means to promote homeownership. In this paper, we estimate the effect by using a difference-in-differences design, with detailed property-level data, that exploits changes of the conforming loan limits (CLLs) along county borders. We find a sizable effect of CLLs on government guarantees but no robust effect on homeownership. Thus, government guarantees could be considerably reduced,with very modest effects on the homeownership rate. Our finding is particularly relevant for recent housing finance reform plans that propose to gradually reduce the government’s involvement in the mortgage market by reducing the CLLs.

And let’s not forget that other academic research has shown that government favoritism for the housing sector harms overall economic growth by diverting capital from business investment.

The bottom line is that Fannie and Freddie are cronyist institutions that hurt the economy and create financial instability, while providing no benefit except to a handful of insiders.

As I suggested many years ago, they should be dumped in the Potomac River. Unfortunately, the Trump Administration is choosing Obama-style interventionism over fairness and free markets.