The Perverse Impact Of Greek Bailouts 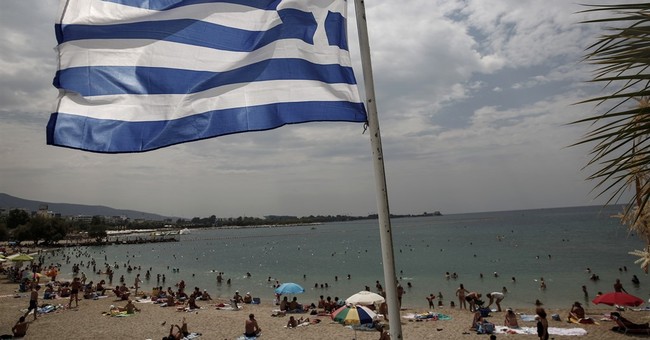 There are many reasons to oppose the various bailouts of the Greek government. Here are my two main reasons.

Here’s Greece’s score for the “Size of Government” component from Economic Freedom of the World. As you can see, bailouts have actually subsidized a decline in fiscal responsibility.

And it’s worth pointing out that Greek politicians have been doing a bad job in other areas.

The burden of red tape has been, and remains, stifling.

Greece ranks at the top in difficulty in setting up and running a business among 75 countries, according to the Global Business Complexity Index for 2019. The difficulty in starting an enterprise in Greece is mainly due to a labyrinth bureaucracy, frequent changes in legislation, differences in taxation and VAT rates in regions and unpredictable treatment of businesses by authorities. Indonesia, Brazil, the United Arab Emirates, Bolivia, and Slovakia follow Greece in the first six places. The easiest state to start and run a business is in the Cayman Islands.

Here are the rankings. Keep in mind that “01” is the worst score and “76” is the best score (kudos to the Cayman Islands for being the most entrepreneur-friendly).

And Bloomberg reports that Greece’s new right-of-center government intends to reduce the burden of government.

Mitsotakis presented his four-year economic agenda in his first plenary speech to parliament since winning national elections on July 7. …The premier’s priority is a reform of Greece’s complex tax system to create a more pro-business environment, necessary for attracting investment to boost the economy’s recovery. Mitsotakis wants to make good on election pledges to alleviate the tax burden for crisis-weary Greeks, specifically for the middle classes who were targeted the most by the previous administration. …Mitsotakis said he will introduce legislation…to reduce the so-called Enfia property tax by as much as 30%, according to the value of properties. …The government plans to reduce the corporate tax rate to 20% in two phases. The first step, in September, will cut the rate to 24% from 28% in 2019 and to 20% in 2020. The tax on dividend payments will be slashed by half to 5%… Also planned is the privatization of Hellenic Petroleum SA and the sale of a 30% stake in Athens Airport.

Indeed, a columnist for the New York Times frets that the new government is hard right.

New Democracy…seems to be a right-wing party… And Mr. Mitsotakis, who promised to unite the country, is following divisive and polarizing policies. …You don’t have to search far for evidence. …Three crucial regulatory agencies — protecting the country’s finances, work force and environment — have been effectively dissolved as part of a bill, recently passed by Parliament, to restructure government. …Domna Michailidou, the vice minister of labor, personifies the cabinet’s ideological agenda. In 2017, she openly praised cuts in wages as “necessary” for the sake of competitiveness. …Greece finished its third and last bailout program last August, but remains shellshocked after nearly a decade of austerity. Official unemployment is at 18 percent; youth unemployment scores a staggering 40 percent. …None of New Democracy’s vaunted policies — to cut corporation taxes and privatize industry in an effort to stimulate economic growth and create “new jobs” — are likely to address the country’s problems. They may well do the opposite.

Some of this sounds good, but I’ll have to see concrete results before I become a believer.

I just focus on results.

Speaking of which, this chart, based on the OECD’s fiscal database, shows what happened to revenue (left side) and spending (right side) between 2007 and 2018.

As you can see on the right side, the burden of spending has actually increased.  That’s not my idea of austerity.

The big change that stands out over the past 10 years, though, is that the burden of taxation has jumped. A lot.

In other words taxpayers have been forced to tighten their belts but politicians haven’t tightened government’s belt.

P.S. I guess bad results should be expected in a nation where bureaucrats demand stool samples before you can set up an online company. Another sign of Greece’s moral and fiscal bankruptcy is that pedophiles can get disability payments.

P.P.S. To offset the grim message of today’s column, let’s also enjoy some Greek-related humor. This cartoon is quite  good, but this this one is my favorite. And the final cartoon in this post also has a Greek theme.

We also have a couple of videos. The first one features a video about…well, I’m not sure, but we’ll call it a European romantic comedy and the second one features a Greek comic pontificating about Germany.

Last but not least, here are some very un-PC maps of how various peoples – including the Greeks – view different European nations.