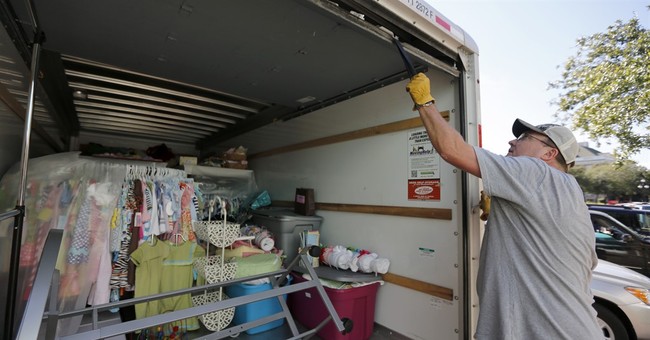 Most people, if they watch The Great Escape or Rambo II, cheer when American POWs achieve freedom.

I’m happy as well, but I also can’t stop myself from thinking about how I also applaud when a successful taxpayer flees from a high-tax state to a low-tax state.

It’s like an escape from oppression to freedom, though I confess it might not be the best plot for a blockbuster movie.

In any event, here are two recent feel-good stories about this phenomenon.

Here’s a report about two members of the establishment media who are protecting their family’s finances from greedy Connecticut politicians.

After reports that married MSNBC anchors Joe Scarborough and Mika Brzezinski have been mysteriously broadcasting their show from Florida — sources speculated that the location is to benefit Scarborough’s tax situation. The “Morning Joe” anchors have been reportedly on a home set in Jupiter, Fla., but using Washington, DC, backdrops. Sources said the reason for the locale was a “tax dodge” — albeit a completely legal one — since Scarborough has a home in Florida and would need to spend a certain amount of the time there for any tax benefit. …Scarborough, who’s still presently registered to vote in Connecticut., on Oct. 9, 2018 registered to vote in Palm Beach County, Fla. according to public records. …By moving to Florida, he’d reduce his tax burden by roughly $550,000. Scarborough reportedly makes $8 million a year and would pay 6.99-percent state income tax in Connecticut, while there’s no state income tax in Florida, the Post’s Josh Kosman reports. To qualify as a Florida resident, he’d need to be there 183 days a year.

According to the story, Scarborough and Brzezinski are only making the move to be close to aging parents.

That certainly may be part of the story, but I am 99.99 percent confident that they won’t be filing another tax return with the Taxnut State…oops, I mean Nutmeg State.

Meanwhile, another billionaire is escaping from parasitic politicians in New York and moving to zero-income tax in Florida.

Billionaire Carl Icahn is planning to move his home and business to Florida to avoid New York’s higher taxes, according to people familiar with the matter. …The move is scheduled for March 31 and employees who don’t do so won’t have a job… Hedge fund billionaires have relocated to Florida for tax reasons for years — David Tepper, Paul Tudor Jones and Eddie Lampert being among the most prominent. But Florida officials have been aggressively pushing Miami as a destination for money managers since the Republican-led tax overhaul. …Florida is one of seven states without a personal income tax, while New York’s top rate is 8.82%. Florida’s corporate tax rate is 5.5%, compared with 6.5% in New York. Icahn’s move was reported earlier by the New York Post. The difference could mean dramatic savings for Icahn, who is the world’s 47th richest person.

These two stories are only anecdotes. And without comprehensive data, there’s no way of knowing if they are part of a trend.

That’s why the IRS website that reports the interstate movement of money is so useful (it’s not often I give the IRS a compliment!). You can peruse data showing what states are losing income and what states are gaining income.

Though if you want a user-friendly way of viewing the data, I strongly recommend How Money Walks. That website allows you to create maps showing the net change in income and where the income is coming from, or going to.

Since our first story was about Connecticut, here’s a map showing that the Nutmeg State has suffered a net exodus (red is bad) over the 1992-2016 period.

In other words, the state is suffering from fiscal decay.

And here’s a map for New York, where we see the same story.

Now let’s look at the state that is reaping a windfall thanks to tax refugees.

Florida, to put it mildly, is kicking New York’s derrière (green is good).

And you can see on the left side that Florida is also attracting lots of taxpayers from New Jersey, Illinois, Pennsylvania, and Connecticut.

By the way, some of my leftist friends claim this internal migration is driven by weather. I suspect that’s a partial factor, but I always ask them why people (and their money) are also migrating out of California, where the weather is even better.

P.P.S. When the IRS releases data for 2017 and 2018, I’m guessing we’ll see even more people escaping to Florida, in large part because there’s now a limit on deducting state and local taxes.