The Grim Consequences Of Democratic Socialism 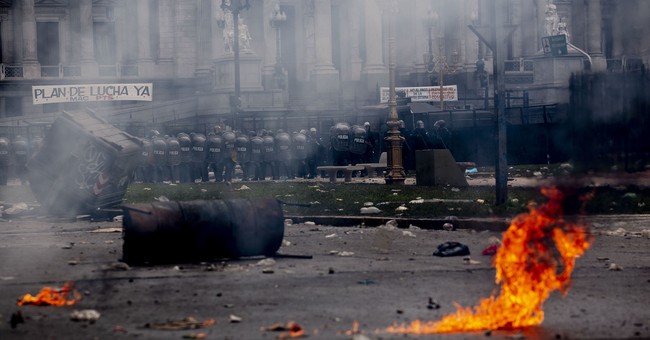 It’s difficult to be optimistic about some parts of the world.

When I look at Greece and Italy, for instance, I can’t help but think that economic renaissance is very unlikely, in part because of demographics, but even more so because voters have been conditioned to think that they have a right to live off the government.

This dependency mindset shows that societal capital has eroded, and it’s why I fear those nations have passed a tipping point.

Another example is Argentina. The Wall Street Journal‘s editorial page is very discouraged that the Peronists may return to power in that country.

Does Argentina have a death wish? That’s the question going around after Peronist Alberto Fernández and his running mate, former President Cristina Kirchner, took first place in Sunday’s presidential “primaries” with 48% of the vote. President Mauricio Macri finished 16 points behind… Clearly investors don’t want to hang around if Mr. Fernández and Mrs. Kirchner—whose eight years as president (2007-2015) were marked by leftwing populism and corruption—get to power. Mr. Macri’s unexpectedly poor showing sent the peso and equities down and default risk for Argentine bonds up.

So why would Argentinians vote for statism and economic collapse, especially since there’s so much evidence that Peronists have done immense damage to the country’s economy?

In part, because they were choosing between Tweedledee and Tweedledum. The supposed center-right incumbent, Mauricio Macri, governed as a statist.

And he’s been doubling down on bad policy in hopes of staying in office.

…he fought back by promising to raise the minimum wage for the second time this year, freeze the price of gasoline for 90 days, increase welfare payments in September and October and give a bonus to federal bureaucrats, police and the military. Perhaps this half-baked populism will move voters, but it augurs poorly for the Argentine future. …Mr. Macri…sought to avoid confrontation. He ought to have set about shrinking the state and its subsidies. Instead he maintained lavish government spending. The kinder, gentler president has been unwilling to tell Argentines in stark terms what they are up against. …Argentine debt has shot up on Mr. Macri’s watch and as a percentage of GDP it is forecast to reach 100% this year. Deficit spending has put pressure on the central bank to print money, and there has been no effort to contain inflation expectations.

Ugh, Macri seems even worse than some of America’s big-government Republicans.

But there is a sliver of good news. If nothing else, Argentina serves as an example of why so-called “democratic socialism” is so misguided.

In some analysis for investors, Michael Cembalest of J.P. Morgan looked around the world for insights and evidence about the ideology championed by Bernie Sanders and Alexandria Ocasio-Cortez (h/t: James Pethokoukis).

He starts off by identifying the key criteria of democratic socialism.

This sounds like Elizabeth Warren’s platform, or perhaps the Green New Deal, so I think this is an accurate list.

Mr. Cembalest points out, though, that the Nordic nations don’t qualify as being socialist of any kind.

Some point to Nordic countries as democratic socialism in action, but…while Nordic countries have higher taxes and greater redistribution of wealth, Nordics are just as business-friendly as the US if not more so. Examples include greater business freedoms, freer trade, …and less of an impact on competition from state control over the economy. …while Nordics raise more taxes than the US, the gap usually results from regressive VAT/consumption taxes and Social Security taxes rather than from progressive income taxes. The bottom line: copy the Nordic model if you like, but understand that it entails a lot of capitalism and pro-business policies, a lot of taxation on middle class spending and wages, minimal reliance on corporate taxation and plenty of co-pays and deductibles in its healthcare system.

He’s right. The Nordic nations get relatively high marks for economic liberty in all areas other than fiscal policy. They’re no more socialist than the United States.

He did find a country, however, that is a very close match for democratic socialism.

I couldn’t find any country that ticked all…democratic socialist boxes, but I did find one that came close: Argentina.

Seems to me that Argentina does tick all the boxes. But since he doesn’t delve into methodology, I’m not sure of his definitions.

In any event, he looks at Argentina’s relative performance over a long period of time, which is the right approach to see if a country is converging or diverging.

There are two ways to look at Argentina’s decline relative to the rest of the world since the early 1900’s. The first shows the ratio of real per capita GDP in 2018 vs the same measure in 1913. Argentina’s ratio barely rose, and is the lowest ratio of all countries for which data is available for both years.

Here’s the relevant chart, and you can see that Argentina has the worst performance over the past 100 years.

He also slices the data using another approach.

The next method illustrates how Argentina used to be among the richest nations in the world, and how far it has fallen. The x axis shows percentile of per capita GDP in 1913, while the y axis shows the same measure in 2018. All countries below the diagonal line have seen their rankings fall, while those above the line have seen their rankings improve. The farther the distance from the diagonal line, the more things have changed; Argentina’s decline from the 83rd percentile in 1913 to the 40th in 2018 is the largest decline on the chart.

And here’s the accompanying chart.

Fast growing nations are above the line, so it’s hardly a surprise to see that the Asian Tigers of Taiwan, South Korea, Hong Kong, and Singapore have done well.

And I’m also not surprised to see that South Africa is almost as bad as Argentina.

At some point, I’ll have to re-crunch the numbers showing the post-WWII era. I imagine that data also will show a very strong relationship between national prosperity and economic liberty.

P.S. One external reason for Argentina’s awful performance is that it keeps getting rewarded for bad policy with IMF bailouts.

P.P.S. Greece is another country that should be a warning sign about what happens with democratic socialism.

The city where a Juneteenth parade is fine, but 4th of July parade is canceled
Hotair
EXCLUSIVE: Chinese Defector's Identity Confirmed, Was Top Counterintelligence Official
Redstate