The Dangerous Seduction Of “Free” 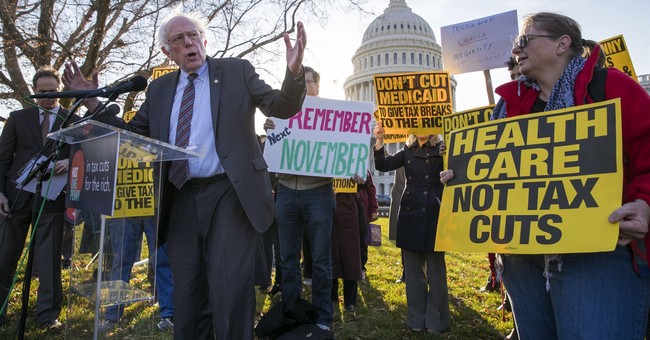 By offering all sorts of freebies to various constituencies, Bernie Sanders has positioned himself as the true-believing socialist in the Democratic race (even though he’s actually a member of the “top-1 percent”).

But he has plenty of competition. Kamala Harris and Elizabeth Warren are strong competitors in the free-lunch Olympics, and most of the rest of the candidates are saying “me, too” as well.

Assuming these candidates get a warm reception, this is a worrisome development.

Part of America’s superior societal capital is (or has been) our immunity to the free-lunch message.

If that’s changing, it will be very hard to be optimistic about the future.

Antony Davies of Duquesne University and James Harrigan of the University of Arizona wrote for FEE about the dangerous – and seductive – ideology of something-for-nothing.

…politicians are tripping over each other to offer voters more “free” things, including everything from health care and college to a guaranteed basic income. But voters should be fostering a healthy sense of skepticism. If there is one eternal and immutable fact in economics, it is that nothing is free. Nothing. …as voters, our healthy skepticism seems to go right out the window. When politicians promise all sorts of “free” things, it doesn’t occur to many of us that those things can’t possibly be free. It doesn’t occur to us that, like businesses seeking our dollars, politicians will tell us whatever it takes to get hold of our votes. …Don’t be so gullible…when you hear Alexandria Ocasio-Cortez and Bernie Sanders tell you how health care and higher education will be free for everyone, remember that…health care and higher education cannot and will never be free.

Davies and Harrigan are economically right. Indeed, they are 100 percent right.

There’s no such thing as a free lunch.

But there are lunches that financed by others. And that’s why I’m worried about support for Sanders and other hard-left Democrats.

I don’t want America to turn into Europe, with people thinking they have a “right” to a wide array of goodies, paid for by someone else.

So what’s the alternative to the something-for-nothing ideology of the modern left?

Bobby Jindal, the former Louisiana governor, recently opined on this topic in the Wall Street Journal.

Progressives are changing the Democratic Party’s focus…to subsidizing everything for everybody. …Democrats now promise free college, free health care and more—for everyone. Republicans can’t outspend Democrats, but they can make the case for freedom and against the idea that everything is “free”… The Republican ideal is…an aspirational society. …becoming dependent on government is the American nightmare. …Republicans have to do more than mock the Green New Deal…if they want to persuade young voters of the case for limited government and personal freedom. …“free” means more government control at the expense of consumer autonomy. When progressives promise government will pay for health care and college, they are really saying government will run medicine and higher education. …“Free” means less efficiency, more expense and lower quality. …“Free” means robbing from America’s children. …Despite proposed marginal rates as high as 70% or even 90%, none of the tax plans Democrats have put forward would raise nearly enough revenue to pay for the promised spending. …Republicans can’t outbid Santa Claus. Americans are willing to work hard and sacrifice for a better life but need to know how pro-growth policies benefit them. Voters may be tempted by progressives’ crazy plans… They will embrace effective market-based solutions that promote freedom if Republicans offer them.

Gov. Jindal has a great message about trumpeting growth as an alternative to redistribution.

Though I’m not brimming with confidence that Republicans are overly sincere when they use this type of rhetoric.

And some of them, like Trump, don’t even bother with pretending that they want to curtail dependency and shrink the social welfare state.

And that does not bode well for America’s future.

P.S. As is so often the case on issues of policy and ethics, Professor Walter Williams is a great source of wisdom.

Share this on Facebook
Tweet
'Justice was Served': Loudoun County Student Found Guilty of Bathroom Sexual Assault
Landon Mion|
Biden Jokes to Elementary Schoolers That His Job is to 'Avoid' Answering Questions from Reporters
Landon Mion|
Dave Chappelle to Transgender Community: 'I Am Not Bending to Anybody’s Demands'
Landon Mion|
Father of Loudoun County Sexual Assault Victim Demands NSBA Apologize for Labeling Him a Domestic Terrorist
Landon Mion|
Another Large Migrant Caravan Is Heading Towards the US: 'Tell Biden We Are Coming'
Julio Rosas|
Two D.C. Police Officers Were Reportedly Told to Have Abortions to Keep Their Job
Madeline Leesman|