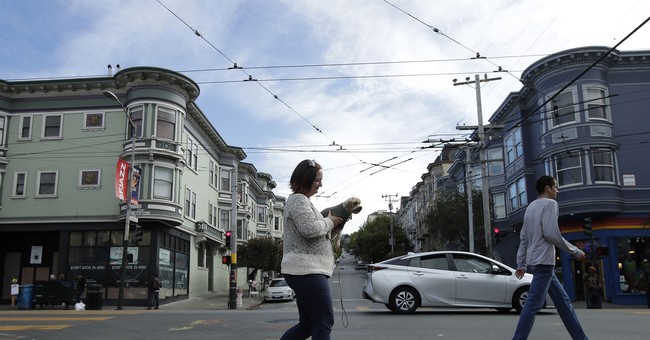 While I constantly criticize the statist policies that are imposed in California, I can understand why people want to live there.

I even realize that lots of people like San Francisco, even though it’s too chilly and too urban (and too officious and too regulatory) for my tastes.

And too expensive. Not just for me. For almost everyone.

In a column for the Washington Post, Karen Heller opines that San Francisco faces some serious problems. Here are some excerpts from her piece.

In a time of scarce consensus, everyone agrees that something has rotted in San Francisco. Conservatives have long loathed it as the axis of liberal politics and political correctness, but now progressives are carping, too. They mourn it for what has been lost, a city that long welcomed everyone and has been altered by an earthquake of wealth. …Real estate is the nation’s costliest. …a median $1.6 million for a single-family home and $3,700 monthly rent for a one-bedroom apartment. …In the shadow of such wealth, San Francisco grapples with a very visible homeless crisis of 7,500 residents, some shooting up in the parks and defecating on the sidewalks, which a 2018 United Nations report deemed “a violation of multiple human rights.” Last year, new Mayor London Breed assigned a five-person crew, dubbed the “poop patrol,” to clean streets and alleys of human feces. …“Our rich are richer. Our homeless are more desperate. Our hipsters are more pretentious,” says Solnit, who once wrote that “San Francisco is now a cruel place and a divided one.” …San Francisco has…the lowest percentage of children, 13.4 percent, of any major American city, and is home to about as many dogs as humans under the age of 18. …the African American population has withered to 5.5 percent compared to 13.4 percent a half century ago.

While Ms. Heller does a good job of describing how San Fran has become a city that’s unaffordable for anyone who’s not a rich, single, hipster, she doesn’t explain why that’s the case.

Though she does quote one resident who says it’s the fault of the free market.

“This is unregulated capitalism, unbridled capitalism, capitalism run amok. There are no guardrails,” says Salesforce founder and chairman Marc Benioff, a fourth-generation San Franciscan who in a TV interview branded his city “a train wreck.”

Is Mr. Benioff right? Has San Francisco become Hong Kong on the Bay?

But his column for the New York Times puts the blame on his fellow leftists.

…look at San Francisco… One of every 11,600 residents is a billionaire, and the annual household income necessary to buy a median-priced home now tops $320,000. Yet the streets there are a plague of garbage and needles and feces… At every level of government, our representatives, nearly all of them Democrats, prove inadequate and unresponsive to the challenges at hand. …Creating dense, economically and socially diverse urban environments ought to be a paramount goal of progressivism. …Urban areas are the most environmentally friendly way we know of housing lots of people. We can’t solve the climate crisis without vastly improving public transportation and increasing urban density. …Yet where progressives argue for openness and inclusion as a cudgel against President Trump, they abandon it on Nob Hill and in Beverly Hills.

And he argues that the solution is…gasp…capitalism!

More specifically, he says government-imposed zoning must be curtailed so the market can provide more housing.

…California lawmakers used a sketchy parliamentary maneuver to knife Senate Bill 50, an ambitious effort to undo restrictive local zoning rules and increase the supply of housing. …because the largest American cities are populated and run by Democrats — many in states under complete Democratic control — this sort of nakedly exclusionary urban restrictionism is a particular shame of the left. …This explains the opposition to SB 50, which aimed to address the housing shortage in a very straightforward way: by building more housing. The bill would have erased single-family zoning in populous areas near transit locations. …wealthy progressive Democrats are…keeping housing scarce and inaccessible…to keep people out. “We’re saying we welcome immigration, we welcome refugees, we welcome outsiders — but you’ve got to have a $2 million entrance fee to live here, otherwise you can use this part of a sidewalk for a tent,” said Brian Hanlon, president of the pro-density group California Yimby.

This is very remarkable analysis, especially since it comes from someone who is so far to the left that he actually proposed to criminalize billionaires.

By the way, I’m obviously not a fan of zoning laws, but it’s easy to understand why some people defend them.

In part, they like the fact that such laws artificially increase the value of their property. And I’m sure some of them are genuinely fond of their neighborhoods and don’t want things to change.

And I’ll even admit they have a point when they argue that changing zoning laws is a bit like breach of contract. After all, people move into a neighborhood under a certain set of rules and regulations.

But my sympathy has very narrow limits. And if you want to understand why, watch this video from the folks at Reason.

The bottom line is that the mess in San Francisco is a teachable moment. It’s helping folks on the left understand that government regulations impose very real costs.

And the fact that Farhad Manjoo is on the right side (at least on this one issue) means a teachable moment actually became a learnable moment.

P.S. San Francisco also has onerous rent control laws. So local officials not only make it difficult to build housing, they also make it difficult to make a profit on housing that’s already there. That means big windfalls for a few insiders, but scarce housing for everyone else.