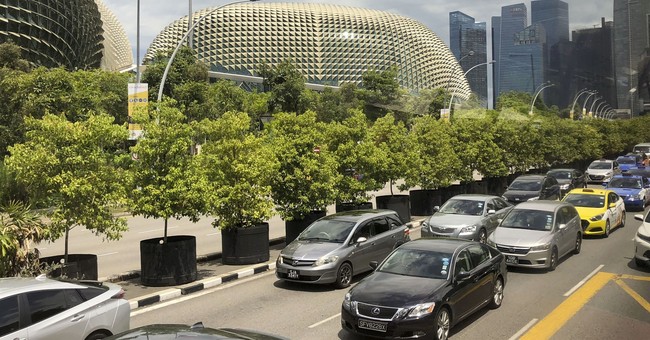 Singapore is routinely ranked as the world’s 2nd-freest economy, trailing only Hong Kong.

The nation’s laissez-faire approach has yielded big dividends. Singapore is now über prosperous, richer than both the United States and United Kingdom.

But there are problems in paradise.

Advocates of class-warfare policy (see here and here) are urging higher tax burdens. And even though there’s no reason to raise taxes (Singapore has a huge budget surplus), politicians have catered to this noisy clique in recent years (see here and here).

In a column for the Straits Times that I co-wrote with Donovan Choy of Singapore’s Adam Smith Centre, we explain why the government should slam the door on all tax hikes, especially proposals targeting entrepreneurs and investors.

Singapore has shown that conventional theories about economic growth need to be updated to reflect that growth doesn’t necessarily need to weaken once a nation becomes prosperous. Singaporeans should be thankful for the sensible governance that has made the nation a role model. Unfortunately, some people are willing to threaten the country’s prosperity by urging higher tax burdens on the wealthy. They risk national competitiveness by advocating additional layers of tax on income that is saved and invested. This “class warfare” approach is deeply misguided, especially in a globalised economy.

Two of them are worth highlighting, starting with the fact that Singapore so far has avoided the trap of “Wagner’s Law.”

What makes Singapore special is that it avoided the mistakes other nations made when they became rich. Countries in North America and Western Europe created costly welfare states once they became relatively prosperous. This is known to academics as Wagner’s Law, and it has serious consequences since larger public sectors reduce competitiveness and lead to less growth.

We also explain that discriminatory taxes on saving and investment are the most destructive method of collecting revenue.

Proponents assert that dividend and capital gains taxes are needed so that upper-income people pay tax. But this line of thinking is misguided. Such income is already subject to 17 per cent corporate income taxation in Singapore. Imposing dividend and capital gains taxes would mean such income is subject to increasing layers of discriminatory taxation. The result is to discourage capital formation (savings and investment) – the very essence of entrepreneurship. And that approach is economically foolish, since all economic theories – even Marxism and socialism – agree that saving and investment are key to long-run growth and rising living standards.

Since today’s topic is Singapore, let’s look at some additional material.

We’ll start with two articles that Donovan wrote for the Foundation for Economic Education.

The first column explains a bit of the history.

The country’s first Prime Minister, Lee Kuan Yew, is often recognized as the father of Singapore. If that is so, then the grandfathers of Singapore would rightfully be three men: Sir Stamford Raffles, who founded the trade settlement, William Farquhar, whom Raffles put at the helm of Singapore in his periodic years of absences, and John Crawfurd, whom Raffles appointed to succeed Farquhar. …Raffles’s intentions were plain as he wrote in a letter in June 1819: “Our object is not territory but trade; a great commercial emporium…,” and to develop “the utmost possible freedom of trade and equal rights to all, with protection of property and person”. …Like Farquhar, Crawfurd shared Raffles’s strong free-market beliefs and pushed his laissez-faire policies even harder… The common denominator of the grandfathers of Singapore was their economic philosophies – capitalism and free enterprise were at the root of their beliefs. The first leaders of colonial Singapore were staunch classical liberals who professed strong beliefs in economic freedoms

You probably won’t be surprised to learn that this is somewhat similar to Hong Kong’s economic history.

Donovan’s next column looks at how Singapore has wisely limited redistribution.

The Singapore welfare system is considered one of the most successful by first-world standards. World Bank data shows that Singapore’s government health expenditure in 2015 is only 4.3 percent of GDP, a small fraction in comparison to other first-world countries…while achieving comparatively equal or better health outcomes… While most of Europe, Scandinavia, and North America spend 30-40 percent of GDP on social welfare programs, Singapore spends less than half as much… qualifying for welfare is notoriously difficult by the standards of most of the developed Western world. The Singapore government’s position on welfare handouts is undergirded by a staunch economic philosophy of self-reliance and self-responsibility where the first lines of welfare should be derived from one’s individual savings, the family unit, and local communities before turning to the government. …This philosophy of self-reliance and responsibility is prominent not only in social welfare but is also replicated in the Singapore government’s approach to retirement savings, health care, education, and housing. For instance, the state’s preferred policy of ensuring individuals have sufficient resources for a rainy day is via the Central Provident Fund, a government-mandated savings account.

Singapore also has what is probably the most market-oriented healthcare system in the world.

Here are some excerpts from a story in the New York Times.

…it achieves some outcomes Americans would find remarkable. Life expectancy at birth is two to three years longer than in Britain or the United States. Its infant mortality rate is among the lowest in the world, about half that of the United States…about two-thirds of health care spending is private, and about one-third is public. It’s just about the opposite in the United States. …What also sets Singapore apart, and what makes it beloved among many conservative policy analysts, is its reliance on health savings accounts. All workers are mandated to put a decent percentage of their earnings into savings for the future. …why is Singapore so cheap? Some think that it’s the strong use of health savings accounts and cost-sharing. People who have to use their own money usually spend less.

The country is also remarkably free of crime, as noted by CNBC.

Singapore was recently ranked second on the Economist Intelligence Unit’s Safe Cities Index for 2017, coming in just behind Tokyo. In 2016, the island nation’s police reported 135 total days without any crimes including snatch-theft, house break-ins and robbery. That low crime rate means many small businesses enjoy little concern about shoplifting. …local businesses take few precautions when closing shop at night. For instance, in the ground floor lobby of a mixed-use building in the downtown business district, many shops don’t have windows, locks — or even doors.

Though it is not a total libertarian paradise.

A column in Bloomberg warns the Brexit crowd that there are statist components to Singapore’s regime.

Over 80 percent of the population lives in public housing… In industrial policy, the government oversees a plethora of schemes targeting mostly off-budget public funding to particular sectors such as biopharma and aerospace, as well as activities such as R&D and skills training. Government-linked companies, whose controlling shareholder is the sovereign wealth fund Temasek Holdings Pte. Ltd., are the dominant players in transport, communications, real estate and media.

Singapore validates Adam Smith’s counsel on economic development: “Little else is requisite to carry a state to the highest degree of opulence from the lowest barbarism, but peace, easy taxes, and a tolerable administration of justice.” …Singapore, Hong Kong, and even the Cayman Islands exemplify commerce-oriented city-states. How can such a small player, like Singapore, achieve prominence on the world’s stage? …acting as a commercial republic and embracing a regime of entrepreneurial public finance. …the culture of an entrepreneurial inclined city-state – like Singapore – differs significantly from that of a parasitical state that feeds on tax extractions.

Here’s his comparison of a predatory government compared to a pro-market government.

Singapore is a successful example of the right column.

P.S. I’ve also had to explain why the Cayman Islands should retain good policy.

P.P.S. Regular readers won’t be surprised to learn that the OECD tries very hard to overlook the success of Singapore’s low-tax model.

P.P.P.S. Singapore is in first place in my “laissez-faire index.”