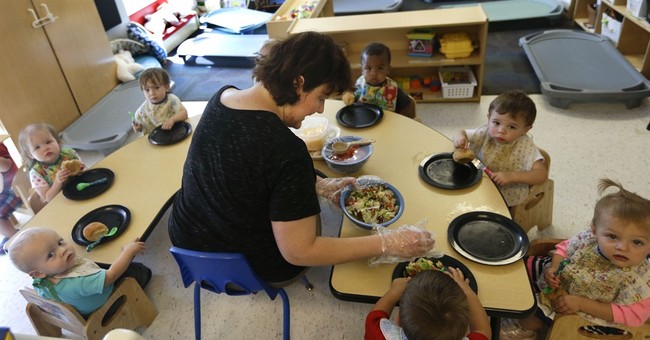 I wrote back in 2011 about a bizarre plan in California to regulate babysitting.

You may be thinking that’s no big deal because California is…well…California.

But other governments also want to control private child care decisions. The latest example is from the District of Columbia, which is going after children’s play groups.

Lenore Skenazy explains the craziness in a column for Reason.

For 45 years, parents have brought their two-year-olds to the Lutheran Church of the Reformation as part of a cooperative play school endeavor. It’s a chance to socialize with other haggard moms and (presumably some) dads dealing with the terrible twos, and it’s volunteer run. …The problem—which isn’t actually a problem, unless you define it as such—is that because the play group has some rules and requirements, including the fact that parents must submit emergency contact forms, as well as tell the group when their kid is sick, the play group is not a play group but a “child development facility.” And child development facilities are subject to regulation and licensing by the government. As Lips points out, this actually creates an incentive for parent-run play groups to be less safe, because if they don’t have rules about emergency contact info, and how to evacuate and such, they are considered officially “informal” and can go on their merry, possibly slipshod, way… Take a step back and you see a group of people—toddlers and parents—enjoying themselves. They’re meeting, playing, and perfectly content. But another group is trying to butt in and end the fun—and the convenience.

And what is that “annoying group”? It’s the bureaucrats who issued the play group a “statement of deficiencies.”

The Wall Street Journal also opined on the issue.

The District of Columbia is literally targeting preschool play dates, claiming that parents need city approval before they can baby-sit their friends’ toddlers. Since the 1970s, parents have organized play dates at the Lutheran Church of the Reformation on East Capitol Street. They formed a nonprofit to pay for the rent, insurance, snacks and Play-Doh, and each family chips in about $200 a year to cover expenses. …The fun and games ended Sept. 7 when gumshoes from the D.C. Office of the State Superintendent of Education showed up. They claimed the Capitol Hill Cooperative Play School counts as a day care center and is operating unlawfully. If the bureaucrats get their way, the co-op would have to hire a director with a background in childhood education or development, apply and pay for a license, obtain permits and abide by all other day-care regulations.

And you won’t be surprised to learn that day-care regulations in DC are ridiculously expensive and misguided.

Anyhow, the WSJ also observes that the play school could evade red tape by being less-well organized. Heckuva set of incentives!

…the day-care police claim the Capitol Hill Cooperative Play School is “formal” because it has a website, draws participants from a hat to limit play-date sizes, and hosts scheduled get-togethers. In other words, the parents aren’t organized enough for the government’s satisfaction but are too organized to escape its harassment. …State Superintendent of Education Hanseul Kang is pushing for more government control over the play dates. She wants mandatory emergency drills, sign-out sheets, CPR and first-aid certification for parent volunteers, limits on the frequency and number of hours co-ops can meet, among other requirements. Nannying the nannies will make life tougher on parents—who have a greater interest than the D.C. government does in ensuring their kids are in good hands.

The final sentence of that excerpt is key.

Parents aren’t perfect, but they have a far greater stake in making right decisions than a bunch of busy-body bureaucrats looking to expand their power.

P.S. This is one of the reasons I support school choice (and also object to throwing more money into government schools). Parents are far more likely to do right for their kids than faraway self-interested bureaucrats.

P.P.S. The bureaucratic version of the keystone cops would include the play-group police in addition to the milk police and the bagpipe police.