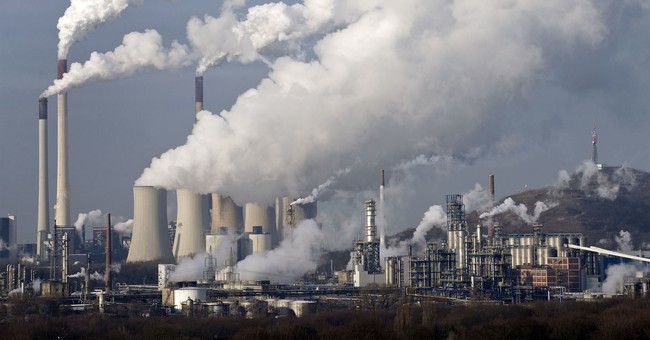 During the Obama years, I criticized the President for various green-energy scams that squandered money and produced scandals such as Solyndra.

And I also noted that many Republicans were happy to support corrupt subsidies to inefficient sources of energy so long as their voters got a slice of the loot.

Sadly, the same thing is happening with Trump in the White House. All that’s changed is that there are different groups sucking at the federal teat.

Catherine Rampell’s column points out how Trump wants the government to pick winners and losers in energy markets.

The GOP…definition of free markets turns out to be pretty confusing… It apparently includes allowing the president to personally dictate what companies must buy, from whom, and at what price; what products they should sell; which employees they should hire and fire; where they should locate… The Trump administration has taken action or raised questions in all these areas… And President Trump’s supposedly laissez-faire co-partisans in Congress have barely said boo. …If that doesn’t count as “picking winners and losers,” it’s hard to say what would. Efforts to prop up inefficient coal-fired plants are…a terrible idea from an economic perspective. The reason these plants are struggling, after all, is that they can’t compete with cheaper natural gas and renewables. Trump is wielding the power of the state to keep uncompetitive companies in business, and costing taxpayers and consumers lots of money in the process.

And remember that this intervention will destroy more jobs than it saves, just as was the case with Obama’s interventions.

This sordid story also is a perfect example of why politicians should never be granted open-ended power.

Trump is now defiantly claiming that “national security” requires bailing out his political allies in the coal industry. It’s the same absurd rationale he has lately invoked for other unfree-market interventions — including, ironically, our military-alliance-straining steel and aluminum tariffs and, perhaps soon, automobile tariffs. …Leave it to Trump to try to strong-arm the invisible hand.

The Wall Street Journal has a hard-hitting editorial castigating the Trump Administration for considering back-door bailouts and special subsidies.

…all of a sudden the Administration wants to do a Barack Obama imitation and play energy favorites. …The supposed problem is that the U.S. is producing an abundance of cheap natural gas thanks to the shale fracking revolution. As a result, national electric wholesale prices for natural gas have plunged by half since 2008… Meanwhile, government subsidies such as the 30% federal investment tax credit have boosted solar and wind production while driving down the wholesale cost. Many nuclear and coal plants unable to compete with renewables and natural gas may have to shut down over the next few years. …Thus, the rescue plan—er, regulatory bailout. According to the Trump memo, Section 202 of the 1920 Federal Power Act lets the Energy Secretary mandate the delivery or generation of electricity during an emergency. It also suggests that the President could use his authority under the 1950 Defense Production Act to “construct or maintain energy facilities” to protect national defense. …Mandating that grid operators buy more expensive coal and nuclear power would raise consumer prices and could reduce natural gas production that has been a boon to many states. And note to Mr. Trump: Energy is one of the biggest costs for steel and aluminum manufacturers. The government rescue for coal and nuclear is as politically abusive as Mr. Obama’s lawless policy to punish fossil fuels. A better way to make coal and nuclear more competitive is to keep chipping away at renewable subsidies and cutting regulation.

The editorial concludes with a very appropriate observation.

As Governor of Texas, Mr. Perry often visited our offices to explain why the U.S. government shouldn’t pick energy winners and losers. He’s still right even if he has moved to Washington.

President Trump is preparing what could be the most astonishing and counterproductive instance of central planning the nation has seen in decades.

Mr. Trump last Friday ordered Energy Secretary Rick Perry to recommend ways to prop up struggling coal and nuclear power plants. …One option would require the purchase of electricity from coal and nuclear plants under a law meant to keep power flowing during emergencies, such as hurricanes. Another scheme would hijack the 1950 Defense Production Act, which allows presidential intervention to secure critical goods when national security is at stake. …Americans could pay hundreds of millions, and perhaps billions, more every year for energy. Wholesale electricity markets could collapse as efficient power plants failed to compete with subsidized dinosaurs.

If Mr. Trump proceeds and the courts somehow allow such a perversion of the law, it would be hard to stop the next Democratic president from, say, using emergency powers to force the purchase of renewables at the expense of coal, oil and natural gas. The president’s latest turn toward economic statism should be no surprise; it has been an animating principle of his presidency. …Mr. Trump is in the midst of picking unnecessary and increasingly costly trade fights with once-close allies, while assuring U.S. farmers that he will use state power — and, presumably, everyone else’s tax dollars — to preserve their margins. Now he is on the verge of asserting dictatorial control over energy markets, using powers meant to be reserved for real emergencies.

Call me crazy, but I want consumers to have the power. And that means allowing competitive markets to allocate resources and determine profitability.

Trump, by contrast, doesn’t seem to have any guiding principles. Yes, he sometimes supports good policy, but he’s also just as likely to favor intervention.

By the way, the Washington Post picked the wrong word in the title of its editorial. At least in theory, socialism means government ownership of the “means of production.” Trump doesn’t want the government to own energy companies. Instead, he wants to control them.

But since that term is now associated with other nasty attributes, let’s call Trump’s policy statism, corporatism, or cronyism. Or, if you like oxymorons, call it state-led capitalism.

Share this on Facebook
Tweet
Bob Dole Dead at 98
Rebecca Downs|
Omar Slams McCarthy as a 'Liar and a Coward' for Refusing to Condemn Boebert Comments
Landon Mion|
Oregon May Actually Make Its Mask Mandate Permanent
Rebecca Downs|
Chris Cuomo Has Been Fired, And Supposedly Even More Information Has Come Out
Rebecca Downs|
Even More Key Democrats Are Getting Caught Up Engaging in Mask Hypocrisy
Rebecca Downs|