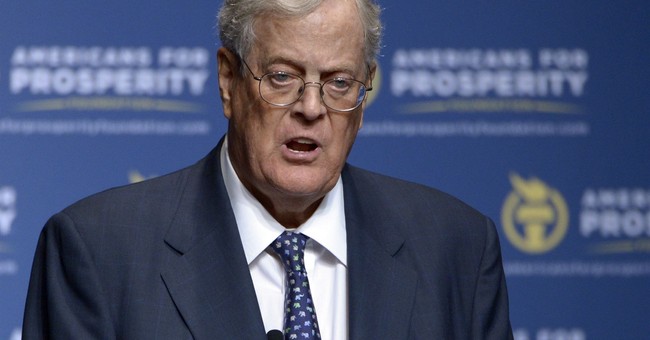 I received my Ph.D. from George Mason University in Fairfax, VA, and I have very fond memories of that experience, including interactions with great economistssuch as James Buchanan and Walter Williams.

But not everyone has favorable views of GMU’s market-friendly program. There’s a group, UnKoch My Campus, that pretends to be horrified that the school has attracted contributions from philanthropists such as Charles Koch and David Koch.

In a column for the Washington Post, Steven Pearlstein opines about the ostensible controversy.

Thanks to a group of courageous and persistent students, George Mason University was recently forced to acknowledge that it had accepted millions of dollars from billionaire Charles Koch and other conservatives under arrangements that gave the donors input into several appointments at the university’s famously libertarian economics department. These arrangements violated traditional norms meant to insulate academic institutions from donor influence… The story fits neatly into the liberal narrative that the Koch brothers, Charles and David, have used their inherited oil wealth to fund the development of radical economic theories at Koch-funded universities.

At the risk of digressing before I even get started, I have to correct Pearlstein’s snide comment about “inherited oil wealth.”

The Koch brothers did inherit a valuable company, but they are not dilettantes with trust funds. They took a successful company and built it into an extremely successful firm. I wouldn’t be surprised if more than 90 percent of any contributions they make are a result of value they created.

Also, Charles Koch is a libertarian rather than a conservative.

Anyhow, back to our regularly scheduled program.

Pearlstein may have taken a cheap shot at the Kochs, but at least he doesn’t blindly parrot the leftist narrative.

…at Mason, the story is more complicated… I’ve been a professor at Mason. …I’m not a member of the economics department — they wouldn’t have me. But over the years, I’ve gotten to know and admire many of the economists there. For the most part, I have found them to be good economists and teachers, incredibly smart, intellectually honest and curious. …In the case of Mason’s economics department, the faculty have driven the donor relationships. In most instances, it was the faculty who approached and solicited Koch and other donors with specific projects in mind, not the other way around. …Our economics department is not libertarian and conservative because it is funded by Koch and his friends; they fund our economics department because its faculty is — and always has been — overwhelmingly conservative and libertarian. …rules and norms of university governance give faculty the power to hire people who think like they do. …Sorting by political or academic ideology is a naturally occurring phenomenon at universities.

The challenge is figuring out what to do about it. …It would have been better if Mason’s presidents and provosts had insisted on more ideological diversity in the law school and the economics department.

Perhaps there’s merit to that idea.

But if that’s Pearlstein’s goal, he should first focus on other departments at other schools. Because there’s an overwhelming bias in the other direction when looking at America’s system of higher education.

Here’s a report from Inside Higher Ed about some academic research by Mitchell Langbert, Anthony Quain, and Daniel Klein.

A new study…, published online by Econ Journal Watch, considered voter registration data for faculty members at 40 leading U.S. institutions in economics, history, communications, law and psychology. Of 7,243 professors total, about half are registered. Some 3,623 are Democrats while just 314 are Republicans. Economists are the most mixed group, with a ratio of 4.5 Democrats for every Republican. Historians as a group are the most lopsided, at 33.5 to one… There are also regional effects, with ratios highest in New England. …Women are much more likely to be registered Democrats, at 24.8 to one. Among men, the ratio is nine to one. …Brown University has the highest ratio for all five disciplines combined, at 60 to one, Democrat to Republican. It’s followed by Boston University (40 to one), Johns Hopkins University and the University of Rochester (both 35 to one), and Northeastern University (33 to one). The lowest ratio — that is, the most even mix of registered Democrats and Republicans — is at Pepperdine University, at 1.2 registered Democrats for every Republican. Case Western Reserve University is next, at 3.1 to one.

Here’s a chart from the report showing that economics is the most balanced discipline, but even in that field Democrats outnumber Republicans by a 4.5:1 margin.

Professor Langbert has some new research on this topic.

And, as pointed out in this report, the problem isn’t getting better.

An extensive study of 8,688 tenure-track professors at 51 of the 66 top-ranked liberal arts colleges in the U.S. published by the National Association of Scholars found that the ratio of faculty members registered as Democrats compared to those registered Republican is now a stunning 10.4 to 1. If two military colleges that are technically described as “liberal arts colleges” are removed from the calculations, the ratio is 12.7 to 1. …nearly 40% of the colleges in the study had zero faculty members who were registered Republican. Not a single one. Nearly 80% of the 51 colleges had so few Republican faculty members that they were statistically insignificant. …this trend toward an increasingly uniformly left-leaning faculty has spanned decades, both in the United States and Britain. “More than a decade ago, Stanley Rothman and colleagues provided evidence that while 39 percent of the professoriate on average described itself as Left in 1984, 72 percent did so in 1999,” Langbert writes. “They find a national average D:R ratio of 4.5:1.

Wow. University professors may be even further to the left than journalists.

Let’s circle back to the controversy at George Mason University.

The Wall Street Journal recently editorialized on the faux controversy.

Progressives dominate all but a few corners of American academia, but apparently they want it all. Witness the political and media assault on George Mason University, an island of intellectual diversity in Northern Virginia… an outfit called UnKoch My Campus…claims that donors like Charles and David Koch inappropriately influence university decisions. The demand is for “transparency” but the real goal is to silence conservative views. …Among the horrors supposedly uncovered by UnKoch is that one condition of these gifts was that George Mason rename its law school after Antonin Scalia. …The truth is that the naming request and decision went through normal university channels that included a vote by the university’s Board of Visitors, as well as the State Council on Higher Education for Virginia. …Donors are committing no crime in trying to judge if their philanthropy is fulfilling its purpose. The Kochs, God bless them, believe in supporting academics who believe in the principles of liberty and market economics. …Researchers from Stanford, Harvard and the University of Chicago Law School found last year that only 15% of American law school professors are conservative. We’re surprised it’s that many.

My two cents is that universities – either faculty and/or administrators – should be free to hire whoever they want under whatever rules they want. And students (or their parents) should be able to say no to schools that go overboard.

But here’s the catch. I don’t want to pay for any of it, either directly or via my kids. Let’s get rid of federal handouts for higher education.

The good news is that the no-subsidy approach also would reduce tuition costs since there no longer would be a third-party-payer problem.

P.S. My dissertation topic at GMU was Australia’s private retirement system, which was a clever decision on my part. Nobody in the United States at the time knew anything about the Aussie approach, which meant it was a) comparatively easy to make a contribution to the literature, and b) the professors on my committee didn’t know enough about the topic to nit-pick. Best of all worlds.