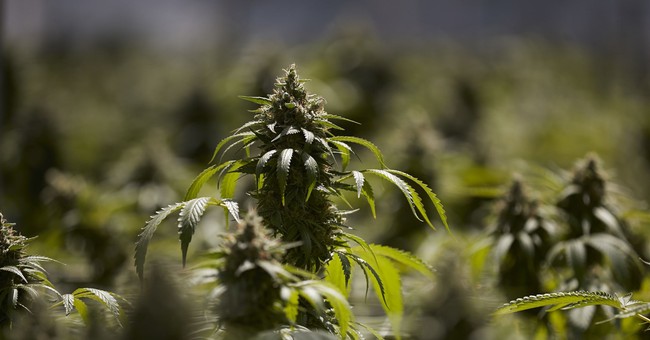 I wanted California to decriminalize marijuana because I believe in freedom. Smoking pot may not be a wise choice in many cases, but it’s not the role of government to dictate private behavior so long as people aren’t violating the rights of others.

Politicians, by contrast, are interested in legalization because they see dollar signs. They want to tax marijuana consumption so they can have more money to spend (I half-joked that this was a reason to keep it illegal, but that’s a separate issue).

Lawmakers need to realize, though, that the Laffer Curve is very real. They may not like it, but there’s very strong evidence that imposing lots of taxes does not necessarily mean collecting lots of revenue. Especially when tax rates are onerous.

Here’s some of what the AP recently reported about California’s experiment with taxing pot.

"So far, the sale of legal marijuana in California isn’t bringing in the green stuff. Broad legal sales kicked off on Jan. 1. State officials had estimated California would bank $175 million from excise and cultivation taxes by the end of June. But estimates released Tuesday by the state Legislative Analyst’s Office show just $34 million came in between January and March. […] It’s unlikely California will reap $175 million by midyear."

And here are some excerpts from a KHTS story.

"Governor Jerry Brown’s January budget proposal predicted that $175 million would pour into the state’s coffers from excise and cultivation taxes […] analysts believe revenue will be significantly lower. […] Some politicians argue high taxes are to blame for the revenue shortfalls preventing that prediction from becoming reality, saying the black market is “undercutting” the legal one. […] The current taxes on legal marijuana businesses include a 15 percent excise tax on purchases of all cannabis and cannabis products, including medicinal marijuana. The law also added a $9.25 tax for every ounce of bud grown and a $2.75-an-ounce tax on dried cannabis leaves for cultivators."

These results should not have been a surprise.

I’ve been warning – over and over again – that politicians need to pay attention to the Laffer Curve. Simply stated, high tax rates don’t necessarily produce high revenuesif taxpayers have the ability to alter their behavior.

And it happens with taxes on marijuana.

Moreover, it’s not just cranky libertarians who make this point. Vox isn’t a site know for rabid support of supply-side economics, so it’s worth noting some of the findings from a recent article on pt taxes.

"After accounting for substitution between products by consumers, we find that the tax-inclusive price faced by consumers for identical products increased by 2.3%. We find that the quantity purchased decreased by 0.95% […] implying a short-term price elasticity of -0.43. However, over time, the magnitude of the quantity response significantly increases, and our estimates suggest that the price elasticity of demand is about negative one within two weeks of the reform. We conclude that Washington, the state with the highest marijuana taxes in the country, is near the peak of the Laffer curve – further increases in tax rates may not increase revenue. […] Tax revenue has historically been one of the many arguments in favour of legalising marijuana. […] The optimal taxation of marijuana should be designed to take into account responses…excessive taxation might prop up the very black markets that legal marijuana is intended to supplant. As additional jurisdictions consider legalising marijuana and debate over optimal policy design, these trade-offs should be explored and taken into account.

Let’s close by reviewing some interesting passages from a McClatchey report, starting with some observations about the harmful impact of excessive taxes.

"Owners of legalized cannabis operations face a range of challenges… But taxes – local, state, federal – present a particular headache. They are a big reason why, in California and other states, only a small percentage of cannabis growers and retailers have chosen to get licensed and come out of the shadows. […] In a March report, Fitch Ratings suggested that California may not realize the tax revenue – $1 billion a year – the state projected when Proposition 64, a legalization initiative, was put before voters in 2016. “While it is still too early to assess California’s revenue performance, comparatively high taxes on legal cannabis will likely continue to divert sales to illegal markets, reducing potential tax collections,” Fitch said in its report. […] Add it all up, and state-legal cannabis in some parts of California could be taxed at an effective rate of 45 percent, Fitch said in a report last year."

Interestingly, even politicians realize they need to adapt to the harsh reality of the Laffer Curve.

"Some state lawmakers blame the taxation for creating a price gap between legal and illegal pot that could doom California’s regulated market. Last month, Assembly members Tom Lackey, R-Palmdale, and Rob Bonta, D-Oakland, introduced legislation, AB 3157, that would reduce the state marijuana sales tax rate from 15 percent to 11 percent, and suspend all cultivation taxes until June 2021."

And I can’t resist including one final passage that has nothing to do with taxes. Instead, it’s a reference to the lingering effect of Obama’s dreadful Operation Choke Point.

"Davies owns Canna Care, a medical marijuana dispensary in Sacramento. Like other state-legal cannabis businesses nationwide, her pot shop operates largely with cash. Most banks won’t transact with enterprises deemed illegal by the U.S. government. That forces Davies to stuff $10,000 in bills into her purse each month… even lawyers who represent state-legal marijuana businesses face financial risks. Sacramento lawyer Khurshid Khoja recently lost his two bank accounts with Umpqua Bank, after Umpqua started asking him about his state-legal cannabis clients."

The good news is that Trump has partially eased this awful policy. The bad news is that he only took a small step in the right direction.

But let’s get back to our main topic. I’ve written several times on whether our friends on the left are capable of learning about the Laffer Curve. Especially in cases when they imposed a tax in hopes of changing behavior!

What’s happening in California with pot taxes is simply the latest example.

And I’m hoping leftists will apply the lesson to taxes on things that we don’t want to discourage – such as work, saving, investment, and entrepreneurship.

P.S. I’ve pointed out that some leftists want high tax rates on income even if no money is collected. That’s because their real goal is punishing success. I wonder if there are some conservatives who are pushing punitive marijuana taxes because they want to discourage “sin” rather than collect revenue.