There Are some Bad Cops, but the Real Problem Is Bad Laws 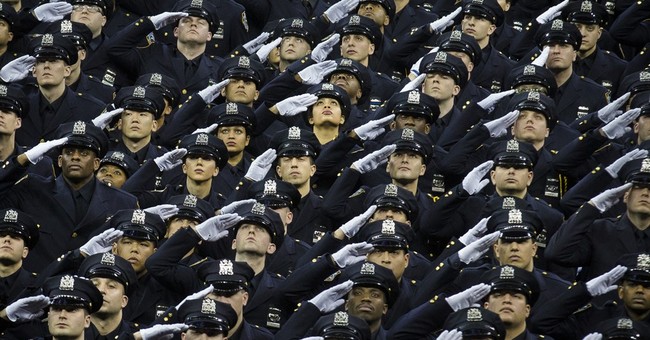 It’s probably not a fun time to be a police officer. The deaths of Michael Brown in Missouri and Eric Garner in New York have led some – including the Mayor of New York City – to explicitly or implicitly accuse cops of systemic racism.

And then you have folks like me, who grouse about cops for reprehensible abuse of citizens as part of the drug war, as well as disgusting examples of theft using civil asset forfeiture.

Heck, any decent person should get upset about some of the ways law enforcement officials abuse their powers. Consider these excerpts from a nightmarish story out of Houston.

Chad Chadwick has something many citizens can only covet – a spotless record. …But on the night of September 27th, 2011 Chadwick’s commitment to living within the law did him no good at all. It started when a friend concerned for Chadwick’s emotional well-being called Missouri City police to Chad’s Sienna apartment where he’d been distraught, drinking and unknown to anyone, had gone to sleep in the bathtub. A SWAT team was summoned.

I’m not sure why a SWAT team was needed in this case, but that’s not the horrific part of the story.

Here’s what then happened.

“They told a judge I had hostages. They lied to a judge and told him I had hostages in my apartment and they needed to enter,” said Chadwick. …Chadwick’s firearm possession apparently prompted SWAT to kick in his door, launch a stun grenade into the bathroom and storm in, according to Chadwick, without announcing their identity.

“While I had my hands up naked in the shower they shot me with a 40 millimeter non-lethal round,” said Chadwick. A second stun grenade soon followed. “I turned away, the explosion went off, I opened my eyes the lights are out and here comes a shield with four or five guys behind it. They pinned me against the wall and proceeded to beat the crap out of me,” said Chadwick. That’s when officers shot the unarmed Chadwick in the back of the head with a Taser at point blank range. …And it wasn’t over. “They grabbed me by my the one hand that was out of the shower and grabbed me by my testicles slammed me on my face on the floor and proceeded to beat me more,” said Chadwick. Chadwick, who hadn’t broken a single law when SWAT burst through his door, was taken to the Ft. Bend County Jail with a fractured nose, bruised ribs and what’s proven to be permanent hearing loss. He was held in an isolation cell for two full days.

Did Mr. Chadwick then get a profuse apology when it was determined that he hadn’t broken any laws?

Ft. Bend County District Attorney John Healy sought to indict Chadwick on two felony counts of assaulting a police officer, but a Grand Jury said no law was broken. …but Healy’s prosecutors tried misdemeanor charges of resisting arrest, calling more than a dozen officers to testify. Those charges were dropped as well.

The government eventually did figure out a way to get Mr. Chadwick into court, but it didn’t turn out so well.

A month ago, three years after the SWAT raid, a jury found Chad Chadwick not guilty of interfering with police. With tears in their eyes members of the jury offered the exonerated defendant comforting hugs. “They tried to make me a convict. It broke me financially, bankrupted me. I used my life savings, not to mention, I lost my kids,” said Chadwick.

This is one of these cases where I hope Mr. Chadwick sues and gets generously compensated (and I would want any damages to be financed out of the budgets of the officials who misbehaved).

Defenders of the police will argue, quite correctly, that we shouldn’t smear entire police forces, or the overall justice system, simply because there are some bad cops and unethical prosecutors.

That’s certainly the right attitude, though it’s worth noting that sometimes the “culture” of a police force can get so poisonous that wholesale dismissal is the only way to get better performance.

Here are some passages from a New York Times report about a city in New Jersey that got far better results by firing its entire police force.

It has been 16 months since Camden took the unusual step of eliminating its police force and replacing it with a new one run by the county. …the old force had all but given up responding to some types of crimes. Dispensing with expensive work rules, the new force hired more officers within the same budget — 411, up from about 250.

It hired civilians to use crime-fighting technology it had never had the staff for.…Average response time is now 4.4 minutes, down from more than 60 minutes, and about half the average in many other cities. …In June and July, the city went 40 days without a homicide — unheard-of in a Camden summer. …And while the unrest in Ferguson, Mo., has drawn attention to long-simmering hostilities between police departments and minority communities, Camden is becoming an example of the opposite. “We’re not going to do this by militarizing streets,” Chief Thomson said. Instead, he sent officers to knock on doors and ask residents their concerns. He lets community leaders monitor surveillance cameras from their home computers to help watch for developing crime.

An even more dramatic example comes from Georgia, a country of 5 million people wedged between Russia and Turkey.

As part of a series of reforms to create free markets and honest government, all 15,000 cops from the State Traffic Inspection Office were fired.

Georgian authorities chose a radical method of reforming the police structures which were not working. …The State Traffic Inspection was one of the most corrupt units in the Georgian government. It was almost totally self-financed, fleecing both local and foreign drivers as they traveled Georgian roadways. According to estimates, 80 percent of the money extorted from drivers was distributed along the chain of command all the way up to the minister. …In early summer of 2004, Merabishvili eliminated the State Traffic Inspection, firing all fifteen thousand employees in a single day! Two months later, in August 2004, the force was replaced by competitive hiring of employees for the newly formed US-style highway patrol. During the two-month transition period there was no policing of the roads, and yet the number of car accidents did not increase. There were no riots.

The part about nothing bad happening when there were no cops is especially revealing.

Sort of like how nothing bad happened during the sequester, even though President Obama warned of terrible consequences (humorously captured by these cartoons).

Or when we got welfare reform in the 1990s and poverty went down instead of increasing as the left predicted.

But now let’s defend cops, who actually help fulfill one of the few legitimate functions of government. And there are two reasons they deserve defending.

First, the vast majority of them almost certainly are good and decent people who simply want to help others by fighting and deterring crime. That’s a real value.

And if politicians didn’t treat police departments as backdoor vehicles for taking money from citizens, there would be no need for some of the unfortunate interactions that now occur between cops and citizens.

Now let’s defend the police from a very incendiary charge. Are cops racists, as some protesters (and government officials) would like us to believe?

Well, I’m sure there are some racist cops (of all colors), just as there are racist accountants, truck drivers, bureaucrats, and even economists. But the real issue is whether racism is a pervasive problem.

And when looking at one of today’s hot-button issues, the answer seems to be no. Kevin Hassett of the American Enterprise Institute has some compelling evidencethat the police do not disproportionately kill blacks.

…understanding the relationship between African-American communities and law enforcement requires a deeper analysis than a single headline… One simple way to check for bias is to see whether the number of violent crimes needed to explain one police-related death is different depending on one’s race. …

But that hasn’t stopped the Obama Administration from subsidizing a group that produced a video that seemingly condones cop killing.

The Obama administration’s Justice Department funneled at least $1.5 million in grants to a New York legal-aid group featured in a new rap video that depicts two young black men aiming handguns at a white police officer. …The video for “Hands Up,” which also shows a white police officer gunning down a black motorist wearing a hoodie, contains lyrics suggesting revenge for much-publicized deaths of black men in confrontations with police. …The organization, which was founded in 1997 and boasts some high-powered corporate lawyers on its board, has enjoyed a steady flow of taxpayer dollars since President Obama took office in 2009.

Accusing cops of systemic racism without evidence is bad enough, but to subsidize a group that glorifies cop killing is downright evil.

But the bottom of line of this post is that our main problem is too many laws that are either designed to collect revenue or to dictate private behavior.

That’s where reforms should focus, not on vilifying the average cop.

P.S. I can’t resist sharing an amusing anecdote about cops. Several years ago, I spoke at the Liberty Forum in New Hampshire, a conference connected with the Free State Project. Many of the participants were avid practitioners of “open carry,” which meant they had handguns strapped to their sides. At one point, I was riding with several of these folks down the elevator at the conference hotel and a family got in. A young boy noticed all their weapons and asked “Are you guys cops?” One of them cheerfully responded, “No, we’re the good guys.”

P.P.S. On the other hand, I also have a less-than-amusing anecdote.

A third of Minneapolis police could leave the force by the end of the year with no replacements in sight
Hotair
Court Decisions Upholding DACA Set Stage For Pres. Trump To Use Executive Orders For Brilliant End Run of Pelosi and Schumer
Redstate