In the 50-Year War on Poverty, Bureaucrats Have Won while Both Taxpayers and Poor People Have Lost

We know the welfare state is good news for people inside government. Lots of bureaucrats are required, after all, to oversee a plethora of redistribution programs.

Walter Williams refers to these paper pushers as poverty pimps, and there’s even a ranking showing which states have the greatest number of these folks who profit by creating dependency.

But does anybody else benefit from welfare programs?

Robert Rector of the Heritage Foundation explains in the Washington Times that the War on Poverty certainly hasn’t been a success for taxpayers or poor people. Instead, it’s created a costly web of dependency.

This year marks the 50th anniversary of PresidentLyndon Johnson’s launch of the War on Poverty. …Since then, the taxpayers have spent $22 trillion onJohnson’s war. Adjusted for inflation, that’s three times the cost of all military wars since the American Revolution. Last year,governmentspent $943 billion providing cash, food, housing and medical care to poor and low-income Americans. …More than 100 million people, or one third of Americans, received some type of welfare aid, at an average cost of $9,000 per recipient.

Here are some of the unpleasant details.

The U.S. Census Bureau has just released its annual poverty report. The report claims that in 2013, 14.5 percent of Americans were poor. Remarkably, that’s almost the same poverty rate as in 1967, three years after the War on Poverty started. How can that be? …WhenJohnsonlaunched the War on Poverty, he wanted to give the poor a “hand up, not a hand out.” He stated that his war would shrink welfare rolls and turn the poor from “tax-eaters” into “taxpayers.”Johnson’s aim was to make poor families self-sufficient — able to rise above poverty through their own earnings without dependence on welfare. The exact opposite happened. For a decade-and-a-half before the War on Poverty began, self-sufficiency in America improved dramatically. For the past 45 years, though, there has been no improvement at all.

The final two sentences of that excerpt are the most important words in Robert’s column.

We were making lots of progress in the fight against poverty in the 1950s. That’s because we relied on the private economy and self sufficiency, as seen on the right side of this Chuck Asay cartoon.. 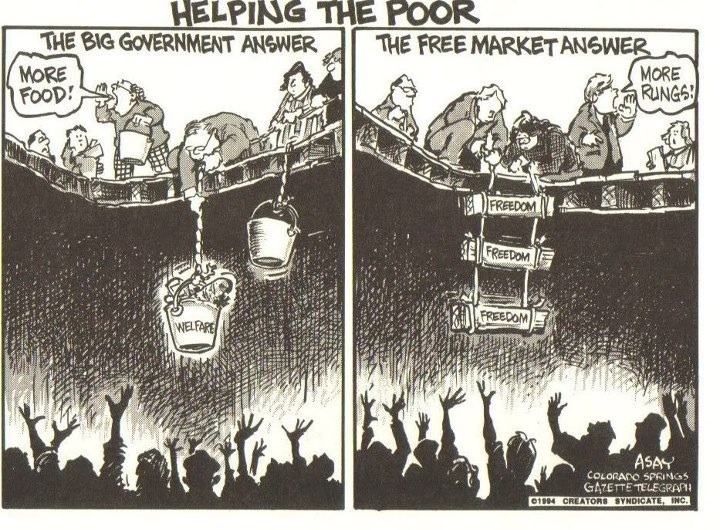 But once politicians decided government was responsible for fighting poverty, progress ceased.

Why did progress stop? Because, as Robert explains, the welfare state creates a dependency trap and enables self-destructive behavior.

The culprit is, in part, the welfare system itself, which discourages work and penalizes marriage. …The welfare state is self-perpetuating. By undermining the social norms necessary for self-reliance, welfare creates a need for even greater assistance in the future. President Obama plans to spend $13 trillion over the next decade on welfare programs that will discourage work, penalize marriage and undermine self-sufficiency.

By the way, being “poor” in America rarely means material deprivation.

Most Americans who live in “poverty” have much higher living standards that people elsewhere in the world.

The actual living conditions of households labeled as poor by Census are surprising to most people. According to the government’s own surveys, 80 percent of poor households have air conditioning; nearly two-thirds have cable or satellite television; half have a personal computer; 40 percent have a wide-screen HDTV. Three-quarters own a car or truck; nearly a third has two or morevehicles. Ninety-six percent of poor parents state that their children were never hungry atany timeduring the year because they could not afford food. …As a group, poor children are far from being chronically undernourished. The average consumption of protein, vitamins and minerals is virtually the same for poor and middle-class children, and in most cases is well above recommended norms. …the average poor American has more living space than the typical nonpoor individual living in Sweden, France, Germany or the UnitedKingdom.

By the way, don’t be surprised by the final sentence in that excerpt. Most people have no idea that Americans have far higher living standards than their cousins in Europe.

For more information on how best to help the poor, watch this video from the Center for Freedom and Prosperity.

Bono actually agrees that capitalism is the best approach to fighting poverty. Too bad the Pope lacks the same insight.

P.S. Here’s a map showing which states have the biggest welfare benefits.

P.P.S. If you want to see an utterly dishonest approach to public policy, read how the OECD tried to exaggerate poverty in the United States, so much so that it even tried to imply that there was more poverty in America than Greece.

P.P.P.S. Thomas Sowell has wise thoughts on how the welfare state hurts the less fortunate.

P.P.P.P.S. Some libertarians have suggested a “basic income” to replace the dozens of inefficient and failed welfare programs in Washington. For what it’s worth, I think there’s a better alternative.

Share this on Facebook
Tweet
FBI Confirms Remains Found in Wyoming are Those of Gabby Petito
Landon Mion|
Psaki Confirms Border Patrol Agents Will Be Disciplined For Protecting America
Katie Pavlich|
Rep. Jordan on Border Crisis: ‘The White House Is Not Willing to Embrace the Policies That Work’
Madeline Leesman|
Bob Woodward: Milley’s Call with China was Made ‘in the Interest of Protecting the Country’
Landon Mion|
'Where Is She?' MSNBC Host Rips Kamala Harris For Being a Miserable Failure on the Border
Matt Vespa|
'Asleep at the Switch': Nikki Haley Rebukes Biden's UN Address
Reagan McCarthy|