I hate to sound like a broken record, but the Organization for Economic Cooperation and Development (OECD) is once again pushing for bigger and more intrusive in the United States. The international bureaucracy’s “Economic Survey” of the United States reads like it was produced by some interns at the Democratic National Committee.

Since the OECD is based in Paris, I suppose it’s not very surprising that it has a statist agenda. But it’s still offensive because American taxpayers finance the biggest portion of the bureaucracy’s budget.

In other words, I’m subsidizing the people who are interfering with America’s domestic policy in hopes of making America more like France!

Moreover, the OECD’s transformation into a pro-statism organization is disappointing since, as I wrote back in 2011 when reviewing some academic analysis of the organization’s left-wing drift, “the OECD initially was designed to be a relatively innocuous bureaucracy that focused on statistics. Indeed, it was even viewed as a free-market counterpart to the Soviet Bloc’s Council for Mutual Economic Assistance.”

Yet today, the OECD behaves as if the West lost the Cold War.

But enough complaining on my part. Let’s look at what the OECD recommended in its Economic Survey.

We’ll start with the (sort of) good news. The bureaucrats actually recognize that America’s economy is suffering from a very anemic recovery and expansion (some of us have been making this point for years).

Here are a couple of charts from the report looking at economic output and employment. As you can see, even bureaucrats from Paris acknowledge that Obamanomics has generated dismal results.

Here’s the chart looking at GDP. 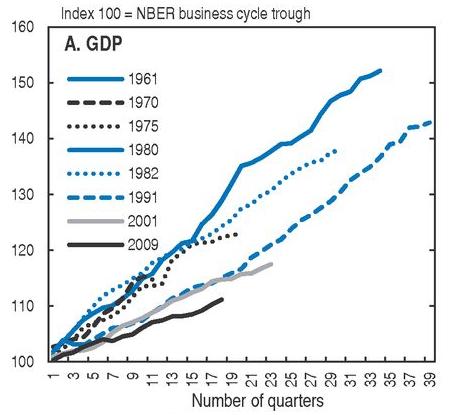 And here’s the chart looking at employment. 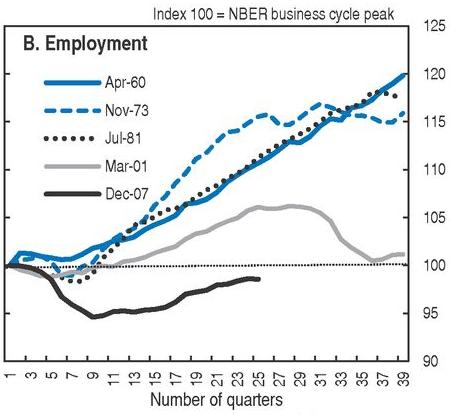 So did the bureaucrats look at these grim numbers and conclude that bigger government isn’t working?

Nope. They basically suggested that America should double down on statism.

I’m not joking. Here are some of the specific suggestions from the report.

The OECD suggested that the United States should “Cut the marginal corporate income statutory tax rate.” You might think that’s a pro-growth recommendation, but the bureaucracy simultaneously recommended that politicians “broaden the tax base, notably by phasing out tax allowances” and also advised them to “take measures to prevent base erosion and profit shifting.” In other words, the OECD embraced Obama’s rearrange-the-deck-chairs-on-the-Titanic proposal.

The OECD urged that politicians “Make the personal tax system more redistributive.” This is an astounding proposal given that the United States already has the most “progressive” tax system of all developed nations (primarily because we have much lower taxes on poor and middle-income taxpayers). The only silver lining to this black cloud is that the OECD wants to further penalize the rich “by restricting regressive income tax expenditures” rather than by raising tax rates. Maybe Francois Hollande gave them some advice on being merciful?

The OECD is a big fan of redistribution, so it’s not surprising to read that the bureaucracy suggests “expanding the ETIC,” regardless of all the fraud. But I confess that I’m surprised that the organization also endorsed “a higher minimum wage.” I understand that the organization see its role as being supportive of Obama, but you would think that the economists at the OECD would have enough self respect and human decency to block a proposal to harm poor people.

The OECD not only wants to make it hard for low-skilled people to get jobs, it also wants to encourage discrimination against younger women. At least that’s the only logical conclusion after reading that the bureaucrats embraced the White House’s scheme for “paid family leave nationally.” As you might imagine, businesses respond to incentives and will be less likely to higher women of childbearing age if the law makes them liable for paying workers who aren’t on the job.

The OECD unsurprisingly reiterates its support for Obama’s global-warming agenda, suggesting that U.S. politicians should be “putting a price on greenhouse gas emissions.” Translated from jargon, this would mean a big tax on energy consumption. And speaking of energy taxes, the bureaucrats also say that government in America should be “capturing some of the resource rent” of energy production. That’s another jargon-laden way of saying that politicians should make it more expensive for people to drive their cars and heat their homes (makes you wonder if they hacked the IMF computers to come up with those bad ideas).

The OECD also thinks the federal government should be more involved in raising kids. The report recommends “Expanding effective targeted interventions – such as Head Start, Early Head Start.” Apparently we’re supposed to applaud good intentions and ignore the fact that even government-sponsored research finds that these programs don’t benefit kids.

There are more bad policies, but this is getting repetitive, so let’s close with some additional charts from the report.

I think you’ll agree that the selection of material and the presentation of the charts (particularly the headings) make it obvious that the OECD is endorsing more statism.

After all, nobody likes their country to be “low” when compared to other nations. 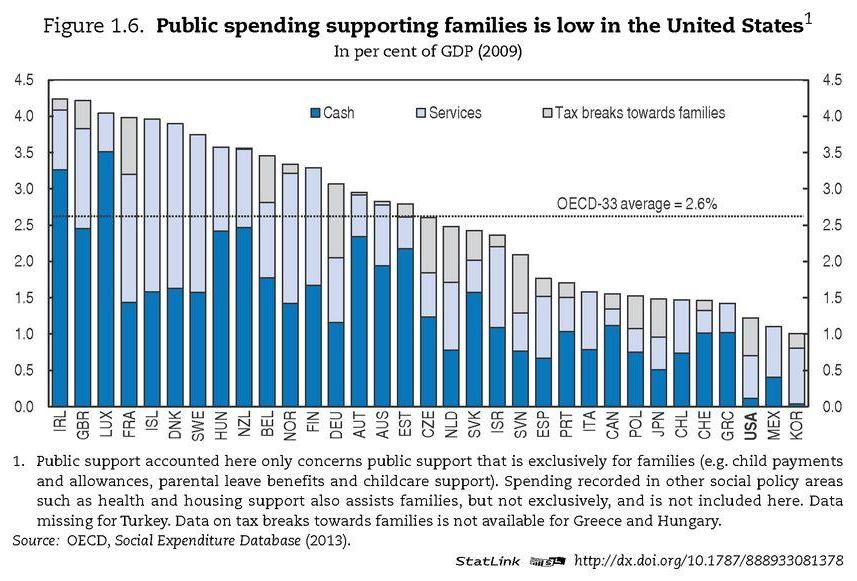 And who want to have “fallen behind”? 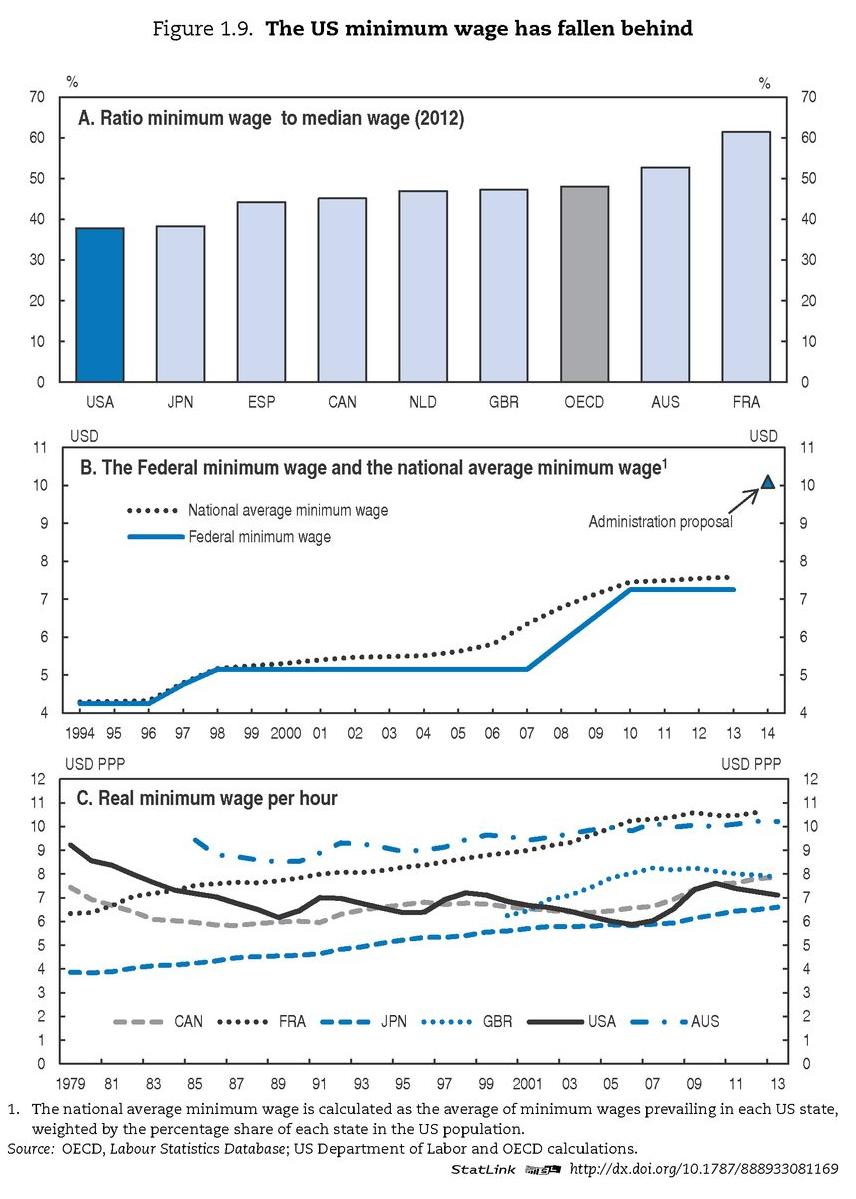 And if “fallen behind” is bad, then “lags behind” may be even worse!

Sigh. In every case, the clear implication is that government should spend more and intervene more.

Gee, I guess I’m supposed to be embarrassed that the United States is “behind” all the wonderful and socially conscious European nations.

Except we’re not behind, at least when it comes to the data that really matter. Just click here, here, and here before deciding whether Americans should listen to the OECD and copy Europe’s welfare states.

P.S. Don’t forget that the OECD’s misguided analysis and recommendations were developed with your tax dollars. Sort of makes you wonder why GOPersdon’t eliminate the handouts that facilitate such nonsense.

P.P.S. Just in case you wonder whether this report is an anomaly, here are a few other examples of OECD work.

*It has allied itself with the nutjobs from the so-called Occupy movement to push for bigger government and higher taxes in the United States.

*The OECD is pushing a “Multilateral Convention” that is designed to become something akin to a World Tax Organization, with the power to persecute nations with free-market tax policy.

*The OECD advocates the value-added tax based on the absurd notion that increasing the burden of government is good for growth and employment.

*It even concocts dishonest poverty numbers to advocate more redistribution in the United States.

Jen Psaki's Answer on Why Biden Suspended Rule Protecting US Power Grid From China Is Incredibly Concerning
Redstate
Bipartisan Senate pitch: Let’s censure Trump instead of an impeachment trial; Plus: A bill of attainder instead?
Hotair