The Most Frugal President over the Past 50 Years Is…Obama?!? 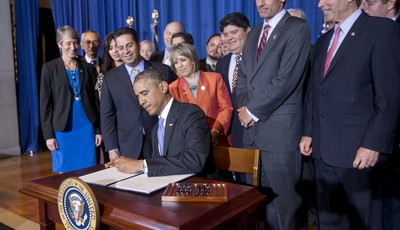 Two years ago, there was a flurry of excitement because some guy named Rex Nutting crunched annual budget numbers and concluded that Barack Obama was the most fiscally conservative President since at least 1980.

I looked at the data and found a few mistakes, such as a failure to adjust the numbers for inflation, but Nutting’s overall premise was reasonably accurate.

As you can see from the tables I prepared back in 2012,

Obama was the third most frugal President based on the growth of total inflation-adjusted spending.

And he was in first place

if you looked at primary spending, which is total spending after removing net interest payments (a reasonable step since Presidents can’t really be blamed for interest payments on the debt accrued by their predecessors).

So does this mean Obama is a closet conservative, asmy old – but misguided – buddy Bruce Bartlett asserted?

Not exactly. A few days after that post, I did some more calculations and explained that Obama was the undeserved beneficiary of the quirky way that bailouts and related items are measured in the budget.

It turns out that Obama supposed frugality is largely the result of how TARP is measured in the federal budget. To put it simply, TARP pushed spending up in Bush’s final fiscal year (FY2009, which began October 1, 2008) and then repayments from the banks (which count as “negative spending”) artificially reduced spending in subsequent years.

So I removed TARP, deposit insurance, and other bailout-related items, on the assumption that such one-time costs distort the real record of various Administrations.

And that left me with a new set of numbers, based on primary spending minus bailouts. And on this basis, Obama’s record is not exactly praiseworthy.

Instead of being the most frugal President, he suddenly dropped way down in the rankings, beating only Lyndon Baines Johnson.

Which explains why I accused him in 2012 of being a big spender – just like his predecessor.

But the analysis I did two years ago was based on Obama’s record for his first three fiscal years.

So I updated the numbers last yearand looked at Obama’s record over his first four years. And it turns out that Obama did much better if you look at the average annual growth of primary spending minus bailouts. Instead of being near the bottom, he was in the middle of the pack.

Did this mean Obama moved to the right?

That’s a judgement call. For what it’s worth, I suspect that Obama’s ideology didn’t change and the better numbers were the result of the Tea Party and sequestration.

But I don’t care who gets credit. I’m just happy that spending didn’t grow as fast.

But what about primary spending? By that measure, we have even better results.

There’s actually been a slight downward trend in the fiscal burden of government during the Obama years.

This doesn’t necessarily mean, to be sure, that Obama deserves credit. Maybe the recent spending restraint in Washington is because of what’s happened in Congress.

I’ve repeatedly argued, for instance, that sequestration was a great victory over the special interests. And Obama vociferously opposed those automatic budget cuts, even to the point of making himself a laughingstock.

But don’t forget that TARP-type expenses can mask important underlying trends. So now let’s look at the numbers that I think are most illuminating.

Here’s the data for average inflation-adjusted growth of primary spending minus bailouts.

As you can see, Obama no longer is in first place. But he’s jumped to third place, which puts him ahead of every Republican other than Reagan. Given that all those other GOPers were statists, that’s not saying much, but it does highlight that party labels don’t necessarily mean much.

My Republican friends are probably getting irritated, so I’ll share one last set of numbers that may make them happy.

I cranked the numbers for average spending growth, but subtracted interest payments, bailouts, and defense outlays. What’s left is domestic spending, and here are the rankings based on those numbers.

Instead, Obama’s only two legacies are a failed healthcare plan and a tongue-in-cheek award for being a great recruiter for the cause of libertarianism.

P.S. Historical numbers sometimes change slightly because the government’s data folks massage and re-measure both inflation and spending. Though I confess I’m not sure why the 2013 calculation for Nixon’s primary spending minus bailouts is somewhat different from the 2012 and 2014 numbers. Perhaps I screwed up when copying some of the numbers, which has been known to happen. But since Nixon’s performance isn’t the focus of this post, I’m not going to lose any sleep about the discrepancy.

Tucker Carlson Has Epic Rant About the Real Theft of the Election
Redstate
Sidney Powell: A “massive” lawsuit is coming in Georgia tomorrow that’ll save Trump’s presidency
Hotair