I periodically (some would say over and over and over again, though occasionally made more palatable by using humor and cartoons) warn that the United States should not become a European-style welfare state.

But I wonder whether I spend enough time explaining why this would be a bad idea.

After all, some people may think that you get more security and benefits with the European approach, so why not head in that direction. And these folks aren’t just pointing with approval to the Nordic nations. A writer for the New York Times actually thinks we should copy Italy.

So it is fortuitous that I’m currently in Poland as part of the Free Market Road Show and got to hear a speech by Prof. Leszek Balcerowicz of the Warsaw School of Economics (and former Deputy Prime Minister and head of Poland’s central bank).

Prof. Balcerowicz specifically compared economic performance in Western Europe and the United States, and the results are not very favorable to the welfare state.

But as you can see from Prof. Balcerowicz’s chart, the convergence process slowed down after the welfare state began to expand in the 1960s. And after the pro-growth reforms of the Reagan years and Clinton years, the United States actually has opened up a bigger lead.

But maybe this chart doesn’t make things sufficiently clear. So I went to the OECD website and found the most recently available data on “average individual consumption,” which is a measure of actual living standards. 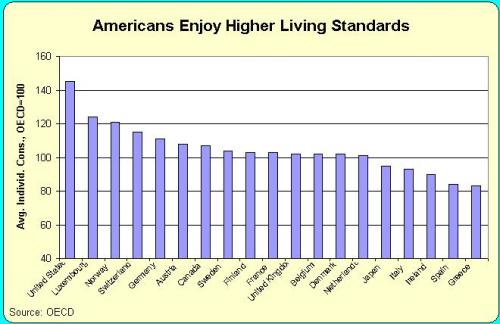 The United States is way ahead of Europe. The only three nations close to us include Norway, which has the good fortune of major oil fields, and Luxembourg and Switzerland, which have the advantage of being tax havens.

By the way, I also shared that data series last year, and you can also see some older AIC data in this 2010 post. But it doesn’t matter how you slice the numbers or when you look at the numbers, the United States has a big lead.

And that lead is now getting larger over time. Heck, the Europeans apparently think any growth – even anemic growth of less than 1 percent – is worth celebrating. Talk about low expectations!

This is why we don’t want to copy Europe. If higher living standards are a good idea (and they are!), then we should copy Hong Kong and Singapore, not France and Italy.

P.P.S. Leszek Balcerowicz has the honor of being named this year’s winner of the Cato Institute’s Milton Friedman Prize for Advancing Liberty. He’ll receive his award at a very nice black-tie dinner in New York City on May 21.

P.P.P.S. Speaking of swanky black-tie events, the PotL and I got dressed up last Thursday for the annual CIFA dinner in Monaco.